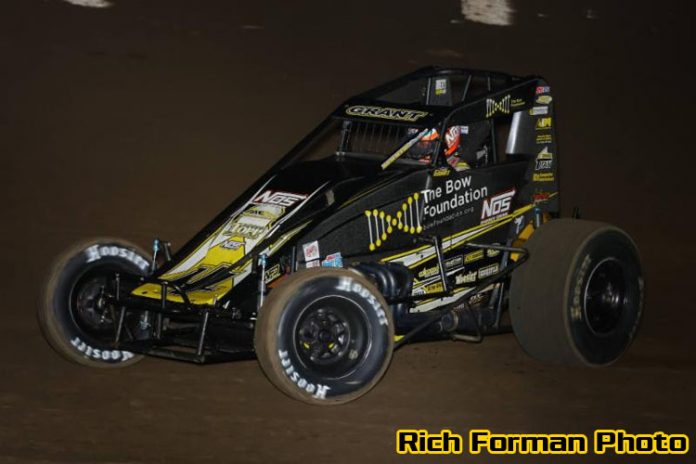 PERRIS, CA – For better or worse, Justin Grant and TOPP Motorsports have learned how to be resilient this year.

They’ve successfully overcome their season-long, mountainous valley of struggles that kept them winless through their first 33 USAC AMSOIL National Sprint Car starts of 2018.

And, on Thursday night, the pair overcame humble beginnings that forced them to start from the fifth row in the A-Main for the opener for the 23rd annual Budweiser “Oval Nationals” presented by All Coast Construction at Perris Auto Speedway.

There was no head-hanging with this bunch as they went to work with Grant methodically picking his way through the field and, with two laps remaining, came to a fork in the middle of the road. So, he took it.

After a brief tussle with Tyler Courtney, Ione, California’s Grant grabbed the lead in late-race fashion in much the same manner as he did in the “Western World” opener one week ago to score his fourth series win in the past six races.

In each of those previous three triumphs, he started from the front row. This one, however, feature the extra element of traffic to wade through on the way to the front.

“We started so far in the back, I got to see it all,” Grant said. “I kind of buried these guys tonight. I didn’t qualify well, and we weren’t very good in the heat race. They made some changes, got us dialed in and this thing was a rocket ship in the feature.”

Granted started 10th in the 26-car field, finding his rhythm early on as last year’s “Ovals” opening night winner Chase Stockon drove off to the lead after narrowly squeezing around Brady Bacon on the back straight for the point on the first of 30 circuits.

The night’s only red flag came on the fourth lap when C.J. Leary, Grant and Thomas Meseraull got stacked up off turn two while running 9th-10th-11th. Meseraull ramped over the back end of Grant and double barrel-rolled before walking away uninjured.

Through the middle stages, it appeared to be Courtney’s show once again as he slid Damion Gardner for second on the eighth lap, then began his pursuit of Stockon. Courtney presented his presence in turn three on the 12th lap, giving a sneak peak of his front bumper to Stockon who clung to the lead for just one more half a trip around the PAS. Courtney came right back at Stockon in turn one on lap 13 and slid to the front with ease and appeared to be gonzo, darting off to a 2.5-second lead past the midway point when the yellow fell for a flat left rear by Cody Williams.

At that point, most eyes were on Courtney at the top of the heap while Grant scrapped his way from seventh to second in succession, passing one car each lap from lap 12 through 17 as he swiftly bolted by Stockon in turn three following the lap 17 restart.

Grant closed rapidly toward Courtney who was seeking to extend his series-leading win tally to 12 this season. Grant gained ground, then lost some, as he hustled his ride around the half-mile, sometimes tapping the wall and banging the cushion as he laid it on the line with no championship implications like he did last year and, thus, had practically nothing to lose.

Once a strip of rubber began to appear on the surface in the late stages, it looked to be lights out for Grant’s opportunities. For it was easier to catch than it was to pass at the moment. With three to go, though, the car of Tommy Malcolm bounced off the turn two wall. As he was gathering it up, Courtney and Grant quickly swarmed. Courtney followed Malcolm into turn three, but Grant went right for the jugular, diving to the bottom and sliding wheel-to-wheel with Courtney when the two made contact – Grant’s right rear and Courtney’s left rear – which sent Courtney scooting up to the outside wall before he grabbed the wheel, punched the gas and motored onward, albeit in the runner-up position now.

On the final lap, Grant found himself in a similar position as Courtney the lap before. He pulled no punches, diving to the bottom of turn three and sliding across the nose of Malcolm to put his destiny into his own grasp. Courtney drove a line lower than both Grant and Malcolm through three and four, making one last run, but came up just two car lengths short as Grant continued his undefeated streak at Perris in 2018 for his third win of the season at the So Cal dirt oval. Courtney came home second ahead of Damion Gardner, Stockon and Kevin Thomas, Jr.

“I thought when it started laying rubber there, we were probably done, and we wouldn’t be able to get by Tyler there,” Grant admitted. “But he got caught behind the lapper and we fired it in there. He tried to drive around it at the last minute, but when you’re sliding across coming back to rubber, there’s not a lot you can do.”

It’s not ideal to get behind the proverbial eight-ball on a race night, or a season for that matter. But, that’s where Grant and TOPP have seemed to thrive the most. Now, they’re world beaters and the sky seems to be the limit for this pair moving forward in the TOPP Motorsports/NOS Energy Drink – TOPP Performance Race Parts – The Bow Foundation/Maxim/TOPP.

Though disheartened about the finish, Courtney did manage to take over the USAC AMSOIL National Sprint Car point lead by seven points over Thomas with two races remaining at Perris these next two nights. On the CRA side, Gardner extended his lead to 23 over Brody Roa.

Of note, to begin the night, Kevin Thomas, Jr. set a new USAC National Sprint Car single-season record for fast qualifying times, laying down his 15th fast time of the year to break Tom Bigelow’s mark of 14 in 1978. 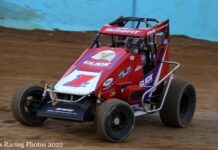 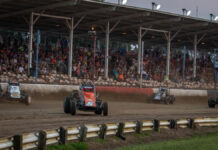