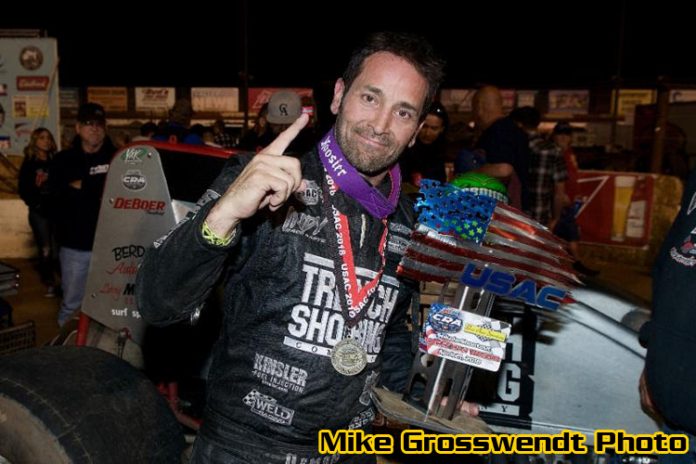 OCALA, FL – Damion Gardner, the winningest driver in the history of Winter Dirt Games, returns with the intention to add to his record total when the USAC AMSOIL National Sprint Cars make their 2019 season debut February 14-15-16 at Bubba Raceway Park in Ocala, Fla.

Concord, California’s Gardner will take the wheel of the Chris Dyson Racing No. 20 for the three-race event to kick off the season. The very same car made just a handful of appearances in 2018 on the series’ trail, but was fast out of the box, picking up a win with driver Thomas Meseraull at New York’s Weedsport Speedway.

It’s been seven years since the seven-time AMSOIL USAC CRA Sprint Car titlist returned West after several seasons on the National trail. But Florida has almost seemed like a second home to him. After all, it was Gardner who won the first two races in the history of Winter Dirt Games in 2010. When Winter Dirt Games packed up and moved to Ocala the following year in 2011, it was Gardner there once again to steal the show. Two nights later, he would win again, then started off the 2012 season in similar fashion with a victory in the season lid-lifter at Ocala.

In simple terms, every year Gardner has competed in Winter Dirt Games, he’s won. Gardner revealed he’s never gotten any calls for a Winter Dirt Games ride since his last appearance, but admitted he wasn’t exactly eagerly searching one out either. Regardless, with five Winter Dirt Games wins in eight starts, including five of the first six, there wasn’t a more accomplished driver waiting in the wings than Gardner. A few recommendations and a phone call or two later, Gardner was set to head to the Sunshine State.


“I haven’t been to Florida in a long time, so I’m pretty excited about it,” Gardner said. “I’ve had a lot of success down there and I loved going down there at the beginning of the year. I’ve heard a lot of good things about these guys (team owner Chris Dyson and crew chief Sean Michael) and I’m pretty excited about the car. It should run pretty good.”

Gardner said that while more races for Chris Dyson could be in the plans for later this season, this is a one-shot deal at the moment. They’ll see how well they work together and take it from there. And while it’s important for any driver and team making their debut together, this is a change for Gardner who usually finds himself in the position of racing for points.

“It definitely changes things,” Gardner acknowledges. “It’s been a long time since I didn’t have to consider that. For many years, and even since I moved back from Indiana, it was always the focus on the back of my mind.”