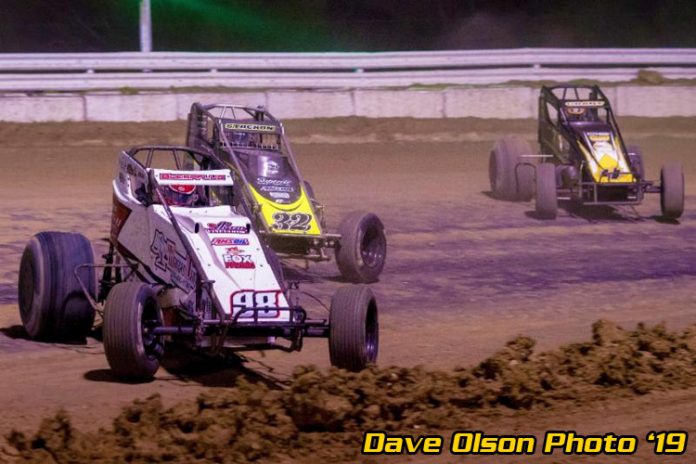 OCALA, FL – The 2019 USAC AMSOIL National Sprint Car openers from Bubba Raceway Park in Ocala, Florida bring with it a slew of talented drivers in a deep field for “Winter Dirt Games X” on February 14-15-16.

Ione, California’s Justin Grant captured the opener in 2017 and closed last season on a tear with five victories in a seven-race stretch. Fellow Californian Robert Ballou of Rocklin is back in action, winning three “Winter Dirt Games” features between 2015 and 2016. Cullman, Alabama’s Kevin Thomas, Jr. has a single win in the mini-series when the latter half was held at East Bay Raceway Park in 2015.

Dave Darland of Lincoln, Ind. picked up an Ocala victory in 2015 while Broken Arrow, Oklahoma’s Brady Bacon opened the 2014 season with a “w,” then scored again the following year in 2015 in Ocala. The all-time winningest “Winter Dirt Games” driver, Damion Gardner, returns for the first time in seven years as he looks to tack on to his incredible five victories, all of which he earned in the first six races of the series between 2010 and 2012.

Past USAC National Sprint Car Rookies of the Year Timmy Buckwalter (Douglassville, Pa.), Jarett Andretti (Mooresville, N.C.) and Isaac Chapple (Willow Branch, Ind) are entered along with 2019 RoY hopeful Zane Hendricks (Stillwater, Okla.). Series veteran Tom Harris of Banbury, Oxfordshire, United Kingdom is the lone representative from outside of the U.S.A. and the only female, Katlynn Leer of Moulton, Iowa.