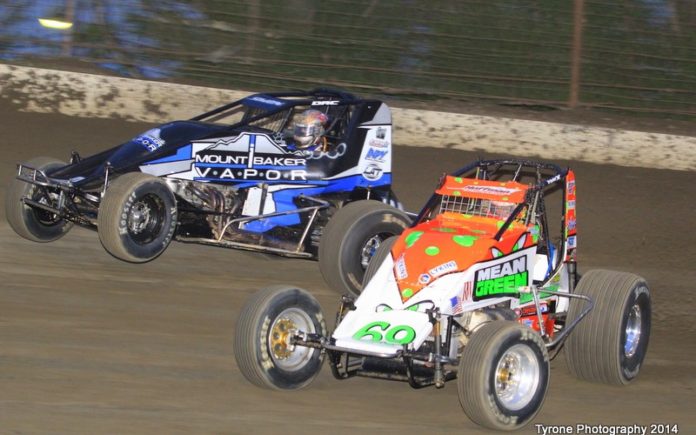 OCALA, FL – Musical chairs was a part of the USAC AMSOIL National Sprint Car offseason as a multitude of drivers, including six of the top-11 in last year’s standings, have found new homes for the 2019 tour, beginning with this week’s “Winter Dirt Games X” season openers on Feb. 14-15-16 at Bubba Raceway Park in Ocala, Fla.

Indianapolis, Indiana’s Tyler Courtney and Clauson/Marshall Racing are singing a perfect tune coming off a championship season in which they won twice at Ocala in 2018 in the No. 7BC. The same combo fired off to a blistering start in USAC NOS Energy Drink National Midget competition last week with two consecutive wins at Ocala to bat 1.000 so far in this young season.

Kevin Thomas, Jr. lost out on the sprint title a year ago in a tiebreaker to Courtney, but the Cullman, Ala. native has switched over to the Hayward/Thomas banner for 2019, aiming to break through with his first title after coming oh-so-close the prior year.

Chris Windom’s highly-successful tenure in the Baldwin Brothers Racing No. 5, which included a 2017 series title as well as back-to-back Eastern Storm crowns and multiple Indiana Sprint Week championships, has concluded. However, the atmosphere around the Canton, Illinois driver remains mostly unaltered with crew chief Derek Claxton coming along for the ride to the Goacher Racing No. 5G.

Ft. Branch, Indiana’s Chase Stockon leads all active drivers with an amazing 260 consecutive starts since becoming a USAC AMSOIL National Sprint Car regular in 2012. In that span, Stockon has won every season and has finished among the top-seven in points seven years running. Stockon began the 2018 season with a victory at the Ocala opener and returns to his familiar 32 TBI Racing No. 32 for the full campaign.
Brady Bacon found his greatest success aboard the Dynamics, Inc. No. 69 with championships in both 2014 and 2016, but the Broken Arrow, Oklahoma native, who stands as the winningest driver in the history of the famed Hoffman family team, is back in the ride for 2019.

Greenfield, Indiana’s C.J. Leary has jumped over to the Reinbold/Underwood Motorsports No. 19AZ as the team takes on its first full national campaign after finding success in USAC’s CRA and Southwest series over the past several years. The team has won in USAC National competition before with Thomas Meseraull in the “Western World Championships,” winning at Arizona Speedway in 2017.

Dave Darland, of Lincoln, Indiana, is the most successful driver in USAC AMSOIL National Sprint Car history in terms of victories and starts and won three times in a rejuvenated year for the National Sprint Car Hall of Fame. In 2019, he finds a new ride with one of the most successful families on the Indiana sprint car scene over the past several decades, aboard the Chase Briscoe Racing No. 5B.

Justin Grant (Ione, Calif), Robert Ballou (Rocklin, Calif.) and Isaac Chapple (Willow Branch, Ind.) all return to the same seats in 2019. Grant was highly-successful down the stretch, winning five of the final eight races in 2018 in the TOPP Motorsports No. 4. Ballou, the 2015 series champ, is back in action in his own No. 12. Chapple, USAC’s Most Improved Driver for 2018, returns in the LNR/Chapple No. 52.

Like Bacon, a couple names return to rides they have experienced previous success with. Hanford, California’s Chad Boespflug has re-teamed up with Eberhardt/Zirzow Racing to field the No. 98e, the same combo that won six USAC-sanctioned Sprint Car races in 2016. Kyle Cummins of Princeton, Indiana won a trio of USAC races in 2016-17 for Rock Steady Racing, with who he returns to in 2019 in car No. 3R.

Those and a host of others will be in competition at Bubba Raceway Park this week. Pits open at 3pm Eastern each day at Ocala. Grandstands open at 5pm on Thursday/Friday and 4pm on Saturday. Cars hit the track for engine heat at 6:30pm Eastern on Thursday/Friday and at 5:30pm on Saturday. An open practice session will take place a day before the action starts from 7-10pm.