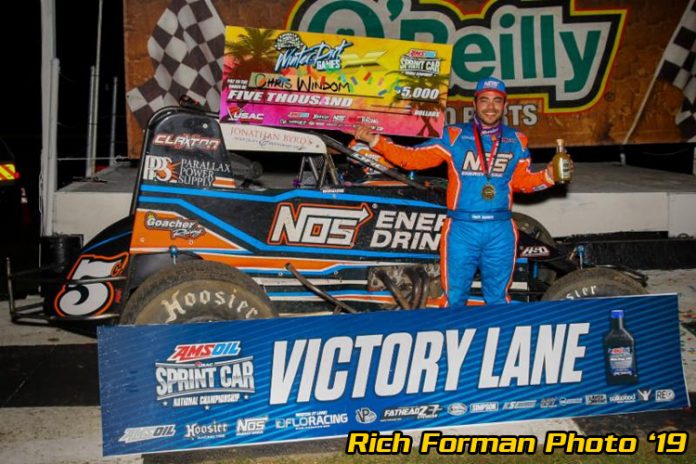 OCALA, FL – Chris Windom led just one lap in Thursday’s USAC AMSOIL National Sprint Car season opener at Bubba Raceway Park, but it was the one that paid the most as the Canton, Ill. driver prevailed on a wild final lap scramble that saw three different race leaders edge ahead at one point in an instant Valentine’s Day classic.

Windom’s victory gave the venerable Goacher Racing team just its second career USAC National Sprint Car feature win, their first such appearance in USAC victory lane in 27 years! You’ll have to go all the way back to the 1992 season to find Goacher Racing’s lone previous series’ win with driver Danny Smith in the “4-Crown Nationals” at Eldora Speedway.

The offseason was a tumultuous one for Windom with the unexpected closure of Baldwin Brothers Racing, for which he won the 2017 series title. That put him in the precarious position of ride-hunting during the short offseason, where he landed with a new team surrounded by some familiar faces and some new, but all with the same expectations of success, which they brought to fruition in their first outing of 2019.

“I brought (Crew Chief) Derek Claxton along with me,” Windom pointed out. “Obviously, we’re very familiar with each other and have had a lot of success together. I kind of molded the whole deal together I feel like. Everyone worked equally hard to put this whole deal together over the winter and I’m thankful to them for giving me the opportunity to do it. Between Jason (Goacher), Joe (Brandon) and Derek, and everybody here helping, I think it came together alright for night one.”


From the fourth starting position, Windom had his work cut out for him from the word ‘go’ with Thomas starting from the pole position. Thomas, also debuting a new ride this season, immediately bolted to a 1.5 second lead in the early-going until Tyler Courtney, going for his fifth-straight USAC score in Ocala rode the outside wall from the entrance of turn three until midway between three and four before coming to a rest. The damage was extensive on the right side of the car, sending him to the sidelines for the remainder of the night.

On a lap 12 restart nearing the midway point, leader Thomas entered turn one a tad lower in a defensive move to block Windom’s slide attempt. Windom tried the slider on an earlier lap seven restart that caught the attention of Thomas’. Both times the move wasn’t able to pay off for Windom, although it put Thomas on guard.

“You’ve got to hound the guy and let him know you’re there,” Windom reiterated. “But, when you make your move, you got to make it count. This place is such a momentum racetrack that if you slide a guy and miss the slider, and get too sideways, you’re going to kill all your momentum, get passed and fall back to third or fourth. You’ve got to time your slide job to where you keep your momentum and not really lose any speed.”

With nine to go, as the frontrunners encountered lapped traffic, Windom slung it to the bottom of turn one and slid up in front of Thomas in turn two. The two collided, Windom’s rear bumper with the front bumper of Thomas, slowing both down only momentarily. Thomas stayed with it ran down Windom in turn three a half-lap later to reclaim the lead for a brief moment before Windom countered and beat Thomas back to turn one. Thomas counterpunched and got back by Windom for the top spot again as Grant now entered the fray to make it a three-car party.

Windom’s repeated bid to secure his position in front of race-long leader Thomas would come up snake eyes until turn one of the final circuit. Thomas had an inkling that Windom would be on the attack underneath, scooting down a lane to protect, but Windom was able to limbo a tick lower, sliding in front of Thomas as the pair made their way through turn two. Thomas slipped a bit high over the cushion, allowing Grant to get by on the inside.

Grant rode the wave of momentum on the throttle into turn three for the final time, slipping under Windom at Mach-10 speed to snare the lead away with only one turn remaining. However, Grant cooked it in and got his ride sideways on exit, slowing his momentum toward the checkered. Windom took a slight evasive action to avoid clipping Grant’s right rear tire to get to the line and finish out an incredible final lap to complete a 0.354 second margin of victory in his Goacher Racing/NOS Energy Drink – Parallax Power Supply – Jonathan Byrd’s/DRC/Claxton Mopar.

Thomas also got by Grant in the final turn to finish second. Grant held on to nip Chase Stockon for third at the line by six-hundredths of a second while Robert Ballou rounded out the top-five.

While the top was undoubtedly the fastest away around throughout the 30-lap feature, you can’t pass if you don’t take chances by coloring outside the lines every once in a while, when the opportunity arises.

“It was fastest around the top and you had to make sure you made the exact right move, or you’d lose a spot or two spots if you missed it,” Windom explained. “I tried to time it just right so that I had a big run on KT. On that last lap, he tried to block my slide job into turn one. Fortunately, I got lower than him and was able to slide up in front of him there. I knew the big crossover was coming and I didn’t know exactly what to do going into three and four. I carried my momentum around the top and it looked like (Grant) got too sideways to clear the slider back on me.”