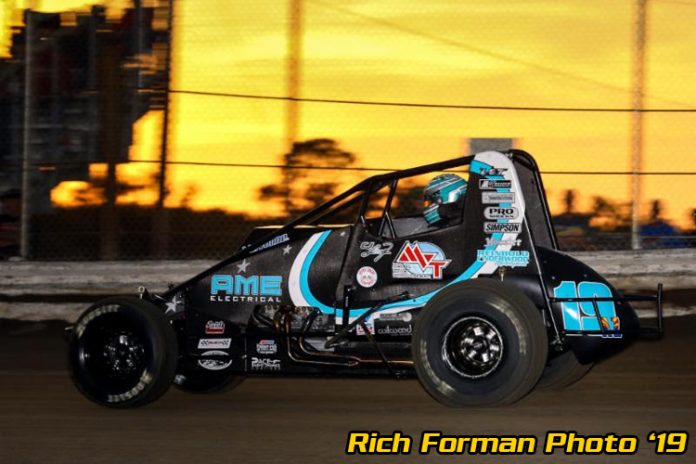 OCALA, FL – The first weekend with a new race team is normally a period when driver and team get accustomed to one another and learn on-the-fly how to win races together.

There were very few bumps in the road for C.J. Leary and Reinbold/Underwood Motorsports throughout “Winter Dirt Games X,” which culminated Saturday night with the combo’s first USAC AMSOIL National Sprint Car victory together at Bubba Raceway Park.

Leary was highly successful on the USAC trail in his own family car over the past several seasons. This past offseason, Leary made the move to the Arizona-based team, bringing with him a familiar face to a new setting to make the transition as smooth as silk.

“The cool thing was Andy (Reinbold) brought me and (crew chief) Davey (Jones) on as a team since we had already been working together and we get along so well on and off the track,” Leary pointed out. “I’m just learning this new racecar and this new engine package is quite a bit different than what I was running the past couple of years on our family car. We did a lot of unique things to the racecar and it paid off for us down here in Florida.”

Winning this early on in the season is always a good sign that things are clicking. With a 6th, 2nd and a 1st during the three-night mini-series, plus the early season point lead, the team is already enjoying the fruits of their labor after thrashing to get their operation ready to go for the new year.

“We had high expectations with this new team,” Leary exclaimed. “Andy gave us the best of everything. Davey and I have put a lot of hours into this car. Just to see it pay off is really awesome for Davey and me. I’m sure it is for Andy just because he’s spent a lot of money getting this thing where it is. This kind of caps off that he hired the right two guys.”

Leary started the 30-lapper from the outside of the front row alongside Robert Ballou. Ballou got the initial jump to the lead, but Leary wasn’t taken aback.

“He got the jump on us at the start,” Leary recalled. “The outside lane was pretty slick, and I knew the bottom still had pretty good moisture. I knew he was probably going to get the jump on us, so I was hoping to cross him over into (turn) one.”

However, Leary slid into second behind race leader Ballou as the two hit the back stretch of the 3/8-mile D-shaped dirt track. The first stoppage came early as Dave Darland and Kent Schmidt tangled off turn four. Both would be finished for the evening.

Following the lap two restart, Ballou extended his lead as Leary fought with Kevin Thomas, Jr. for the second spot. But, gradually, Leary was able to chip away at Ballou’s lead as the frontrunners began to work lapped traffic by lap nine where Leary was able to take a sneak peek underneath Ballou heading into turn one.

Leary retained his presence just a few car lengths behind Ballou when, on the 12th lap, Ballou drifted high off turn four, allowing Leary underneath to grab the lead.

“I just stalked him there and then we had that yellow,” Leary remembered. “Our car was really good on the restarts, and when he made that small mistake in three and four, it got tight on him and let us capitalize, drive up under him and it was pretty smooth sailing from there.”

Leary’s only close encounters were dealing with lappers and having to endure multiple restarts down the stretch, first on lap 21 for an excursion by Friday night winner Justin Grant and on lap 28 for a turn four Matt Westfall spin. The restart with just three laps remaining pit Leary versus Thomas back in second. Usually a caution with a late-race lead is something to fret about, but Leary had no qualms.

“I was just really happy to see those yellows to be real honest,” Leary reiterated. “I normally hate seeing yellows when I’m the leader. This 19AZ was super fast on the restarts and we were digging hard. I’m just happy to be with this new team. It’s a great way to start the season off.”

On the lap 28 restart, Leary bolted to a five-car-length lead that built to six, seven, eight, nine, then ten car lengths that would prove to be insurmountable in the final stanza, with the Greenfield, Indiana driver pulling away for a 1.502 second victory over Thomas. Tyler Courtney made a substantial charge on the final restart from sixth to third. Chase Stockon was fourth with opening night winner Chris Windom rounding out the top-five.

Courtney captured the title of Passing Master courtesy of Indiana Mafia/Hughes Racing/Flamingo Sandy worth an extra $800, picking off a total of 25 cars throughout the USAC Sprint feature events of “Winter Dirt Games X.”