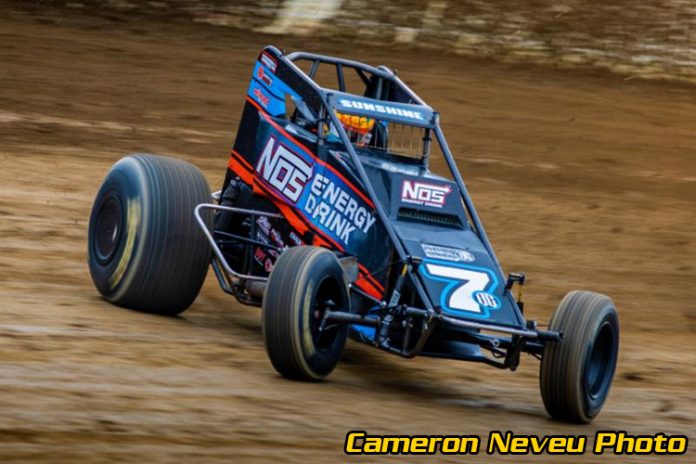 After a few bumps in the road in the early going of the season, the defending series champ got off the relative schneid last Friday with his first series win of 2019, just in time to hit another venue he’s already conquered in his still-young career, Tri-City Speedway in Granite City, Ill., this Friday and Saturday, May 17-18, for the “River Town Showdown,” back-to-back nights of doubleheaders featuring USAC Sprints and the NOS Energy Drink Midget National Championship.

Courtney broke through in his Clauson/Marshall/Newman Racing No. 7BC last weekend at Eldora, leading the final 25 laps for a simply dominating performance on the half-mile dirt oval in Ohio. The Indianapolis, Ind. driver became the fifth different series winner in five races, something that’s only been accomplished once in the past decade – 2014 when there were eight winners in the first eight races.

In the series’ most recent visit to Tri-City last August, the feature proved pivotal for Courtney. It’s where he won and recaptured the point lead en route to the season title. On the last restart, Courtney had to withstand an assault from Kevin Thomas, Jr. Concluding the season knotted up with the same amount of points, any change in position at the end that night at Tri-City could’ve flipped the roles for who was going to enjoy the thrill of victory and who was going to endure the agony of defeat.

Perhaps it’s too soon for championship talk at this point five races in, but the points swung at the top once again over the weekend as C.J. Leary vaulted to the head of the class by 12 markers over Thomas with Courtney surging to third, 43 points behind the leader.

Leary was a rocket all weekend, setting Fatheadz Eyewear quick time both nights and finishing second in Friday’s feature. On Saturday, he followed up quick time with a heat race win before the rains came and washed away the remainder of the evening. Last year at Tri-City, Leary (Greenfield, Ind.) led the first nine laps before encountering trouble and dropping back to a 20th place finish.

Thomas, of Cullman, Ala., was fast time at Tri-City a year ago and was charging hard at the end before coming up just short to Courtney. Thomas hasn’t won just yet with the series in 2019, but he’s been about as consistent as you can ask for, not yet finishing outside the top-six and scoring three runner-up finishes.

Broken Arrow, Oklahoma’s Brady Bacon had a third-place result in last year’s Tri-City trip. He’s fifth in points with a win at Bloomington (Ind.) Speedway on his resume thus far in 2019. Chase Stockon of Fort Branch, Ind. is a spot ahead of Bacon in the standings. He started on the pole and finished ninth at Tri-City last season.

The first two series’ winners of the year, Chris Windom of Canton, Ill. and Justin Grant of Ione, Calif. are locked up for sixth in the standings. Windom was sixth and Grant eighth at Tri-City in 2018. Windom captured a fourth over the weekend at Eldora while Grant took eighth.

Rocklin, California’s Robert Ballou, the 2015 USAC AMSOIL National Sprint Car champion, was fourth in the most recent Tri-City tango after starting ninth. Ballou is tenth in the standings and seeking his first win of 2019.

Eighth in points Jason McDougal won his heat and finished 18th in his debut at Tri-City last year while Isaac Chapple, 12th in the standings, captured his heat and ran 11th a year ago. At Eldora last weekend, McDougal and Chapple raced across the line together, McDougal (Broken Arrow, Okla.) in ninth and Chapple (Willow Branch, Ind.) in tenth, a hard-charging performance from the 18th starting spot that earned him his best finish of the 2019 campaign.

Carson Short and Chad Boespflug are eager to make their USAC debuts at Tri-City this weekend. Short, of Marion, Ill., finished fifth last time out at Eldora and has recorded fast time twice already on the way to ninth in points. Boespflug, of Hanford, Calif., finished 21st at Eldora after suffering an engine problem just after taking the checkered flag in his heat, and continued to plague the team into the future.

He and whole host of others are ready to regroup and head to Tri-City for the 21st time in series history. Jay Drake, Jack Hewitt, Danny Smith, Greg Weld and Doug Wolfgang each have scored two victories at Tri-City while Steve Butler, Tyler Courtney, Rick Hood, Kelly Kinser, Ralph Liguori, Troy Rutherford (a Special Event win), Randy Standridge, Tony Stewart, Sammy Swindell and Josh Wise have one each.

Registration and pit gates open at 3pm (Central). Grandstands and ticket office open at 5pm. Cars on track at 6:30pm.

Adult general admission tickets are $25 while children 12 and under are FREE. Pit passes are $30 apiece for members and $35 for non-members.