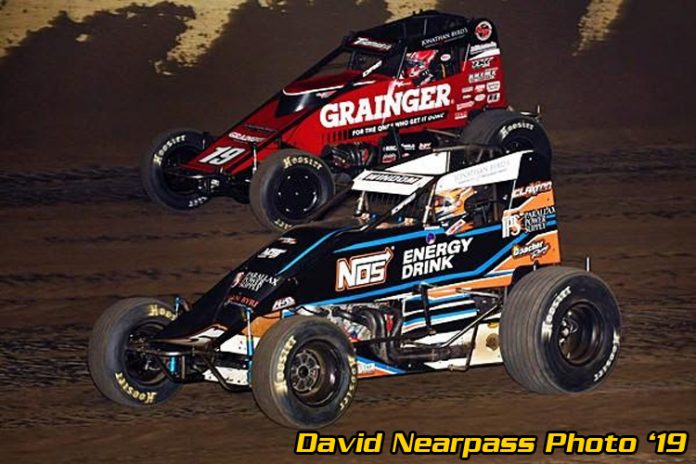 GRANITE CITY, IL – In a season with so much parity, the first winner of 2019 became the first repeat winner of the season as Chris Windom outdueled Carson Short in a wild Brandt “River Town Showdown” USAC AMSOIL National Sprint Car feature Friday night at Tri-City Speedway.

In a race of attrition and heart-stopping sliders, Windom and Short were the class of the field in the end with each going after the other’s jugular in a see-saw stretch for much of the race that witnessed the pair swap the lead numerous times until Windom, the 2017 series champ, emerged with his 23rd career USAC National Sprint Car victory, tying him for 22nd all-time with the great A.J. Foyt and Roger McCluskey.

The Canton, Ill. native started fifth for the start of 30-lap main event, while up front, Chase Stockon whipped around the outside of pole sitter Chad Boespflug to take the top spot on the opening lap, instantly breaking out to a five car length advantage.

Shortly thereafter, on the second lap, Justin Grant found himself spinning backwards at the exit of turn two. Mitch Wissmiller couldn’t avoid the carnage, plowing into the stopped Grant, which sent both drivers and cars to the sideline for the remainder of the night.

On the lap two restart, Kevin Thomas, Jr. drover around Boespflug for second, bringing Tyler Courtney, Short and a slew of others along with him. Thomas dove inside Stockon in turn three for first on the sixth lap, but Stockon fought back on the bottom off turn four, beating Stockon by a half car length at the stripe. Meanwhile, Short and Windom were approaching the party, with Windom eventually getting Short for second on the 10th lap with a turn three slider.

Jason McDougal dropped a driveshaft in turn three one lap later to bring out the caution, erasing the half-straightaway lead Thomas had constructed.

hoturn two to recapture the point and keep Windom at bay for the meantime. Thomas fended off Windom’s slider in turn one on lap 12, but that allowed Short stick his nose in and capitalize on the back straightaway, going from third to first in an instant past both Windom and Thomas, who whiffed the outside wall exiting turn four as Short took over the lead and Windom moved past Thomas.

At the midway point, Windom answered by running downhill off turn four to surge past Short heading into turn one, but it would be all for naught as fifth-running Brady Bacon flipped in turn four to necessitate a red flag. Incredibly, the two-time series champ restarted and drove all the way back to a ninth-place finish.

That moved Short back into the lead, with a new engine loaded in the chamber after experiencing engine troubles following a fifth place finish the weekend before. Short cut off any attempt for a Windom slider by taking a lower line into turn one on the restart, allowing Short to gain some space on Windom.

Windom reeled Short in again and slid past again in turn three, forcing Short to counter back to the lead off turn four. Windom kept the pressure applied and two raced across the line on lap 20 side-by-side. Windom kept digging and the relentless assault paid off finally on lap 21 with a divebomb into turn three that saw him emerge with the lead. Short tried once more a lap later, sliding in front of Windom in turn three on the 22nd lap, but a slowing Korey Weyant put a cease-fire on the entertaining battle momentarily with a yellow flag.

Windom cut through the middle on the following restart, keeping his Goacher Racing/NOS Energy Drink – Parallax Power Supply – Jonathan Byrd’s/DRC/Claxton Mopar up top until yet another yellow stopped the event when fourth-running Courtney, who had won the Midget feature earlier in the night, biked and pirouetted against the outside turn four wall, putting out for the remainder of the race and giving him a finish of 14th.

On the final restart, on lap 24, Windom ignited with an excellent restart, at least momentarily, as Short hung with Windom just a couple lengths back. Short continued in the role of pursuant during the final laps, banging hard off the turn four cushion on the 26th lap, but unable to make up any substantial ground on Windom who carried on to a 1.832 second victory over Short, Thomas, point leader C.J. Leary and Isaac Chapple.

“I couldn’t get to the lead there, and when I did, the caution came out and set us back,” Windom recalled. “I knew, for the entire race, we had a car to win this race. We didn’t get a very good start and had to get back through the field. (Crew Chief) Derek Claxton, (Car Owner) Jason Goacher, john and these guys, gave me a great racecar to get back to the front like we needed to. It was a hell of a battle with Carson and KT.”