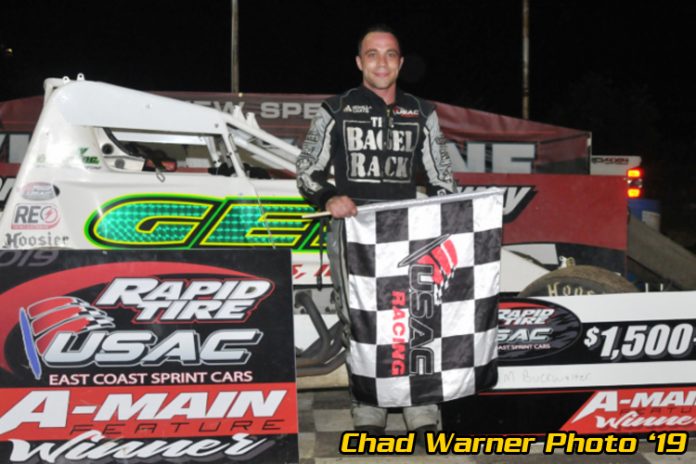 BETCHTELSVILLE, PA – It all started with a phone call on Monday and ended with victory lane photos on Saturday for Timmy Buckwalter of Douglassville, PA as he was able to collect his first Rapid Tire USAC East Coast 360 sprint car win at his weekly home track, Grandview Speedway.

Joey Biasi and Carmen Perigo would lead the field to the green flag, but the caution would quickly wave as Eddie Strada and Chris Allen got together on the initial start and collected Eric Jennings and John Stehman. Strada kept his position as he never stopped. Stehman rejoined, but at the tail of the field. Allen and Jennings, however, were not so lucky and their nights were over

The following restart would again have chaos in turn one as a spinning Eddie Strada would collect the cars of Connor Leoffler and Bill Unglert. All suffering front end damage and sending the three drivers pit side.

When the field went green again on Biasi was able to grab the lead with Carmen Perigo hot in his bumper. Buckwalter had now found himself in third after starting the feature in the fifth position. Buckwalter made quick work of passing the stout Perigo machine, before setting his sights on Biasi. Buckwalter would make the pass on Biasi and look to set sail before a caution flew on lap 7 for a slowing Ryan Quackenbush machine.

From the ensuing restart on Timmy Buckwalter had a comfortable lead over the rest of the field, but the rest of the finishing positions were under fire as an intense battle for positions 2-4 occurred between Biasi, Perigo, and 11th starting Steve Drevicki. Drevicki would make a fantastic “two for one” pass in turns three and four passing both Perigo and Biasi on lap 23. Unfortunately for Drevicki and the rest of the field, it was too late as Timmy Buckwalter would cruise on to collect his first ever USAC East Coast victory, and the first ever series win at the Grandview Speedway. Steven Drevicki, Carmen Perigo, Joey Biasi, and the hard charger of the night, Chandler Leiby rounding out the top five.

Leiby would have a tough night turn better following a heat race flip and a trip to the B Main. Leiby started in the 17th position and was able to work his way through the field and miss the incidents to collect the 5th place finish.

Twenty-Three cars would be in the pit area for competition in the inaugural event at the Grandview Speedway with Carmen Perigo, Joey Biasi, and Timmy Buckwalter collecting the heat race wins. Zack Burd was able to collect the checkers in the semi event.

Up next for the Rapid Tire USAC East Coast Sprint Car Series is a trip to the 3/8ths mile inner oval at the Bridgeport Speedway in Swedesboro, New Jersey.