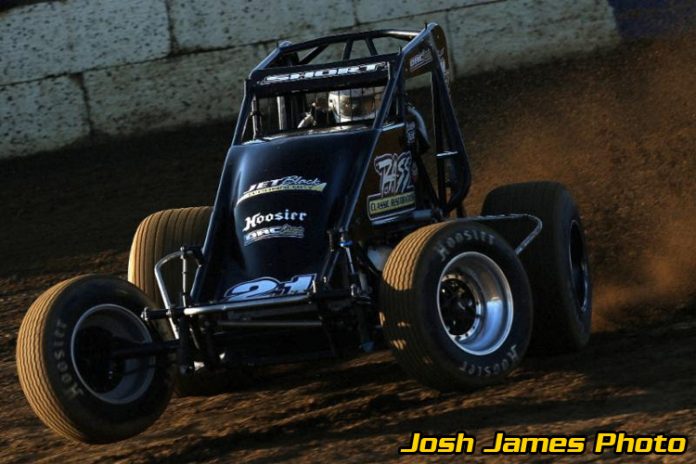 TERRE HAUTE, IN – No single race has a longer tenure on the USAC AMSOIL National Sprint Car schedule than the “Tony Hulman Classic” at western Indiana’s Terre Haute Action Track.

The grand event arrives at its 49th annual edition on Wednesday, May 22, at the legendary half-mile dirt oval at the Wabash Valley Fairgrounds with five former winners gunning to grab the coveted rifle awarded to the race winner.

Tyler Courtney is the defending winner of the “Hulman Classic,” leading the final nine laps after sliding by Chase Stockon in turn one on a late-race restart that came just moments after he almost saw his bid for a first victory at Terre Haute vanish before his eyes.

While running second late in the going, Courtney took evasive action to avoid a flipping lapped car. Courtney, of Indianapolis, Ind., didn’t get away completely unscathed. Courtney bounced his right rear off the flipping car but motored on with just a bent wheel cover.

In the post-race festivities, the traditional rifle was the first time Courtney had ever held a gun in his life. As it turned out, Courtney was on the hunt to bag more victories at Terre Haute, which he did again during last summer’s “Indiana Sprint Week,” before rounding out the Terre Haute season with a seventh place run last September.

Steve Butler (1987-88), Levi Jones (2008-09) and Robert Ballou (2015-16) are the only previous drivers to have gone back-to-back to victory lane at the “Hulman Classic.” Courtney just recently won the round at Eldora for his first win of the season in five attempts and appears prime to make a bid for consecutive wins.

But, several others are also in that same boat. Ballou, of Rocklin, Calif., set fast time during qualifying of last Fall’s Terre Haute visit and is looking for his first win of the year as is 2017 “Hulman Classic” winner Kevin Thomas, Jr. of Cullman, Ala. who has three runner-up finishes in five starts this season. Dave Darland of Lincoln, Ind. earned his first career USAC win during the 1993 “Hulman Classic” before waiting 21 years to do it again by winning in 2014.

Canton, Ill. driver Chris Windom has a “Hulman Classic” win in his back pocket, taking the 2011 race. He was victorious in the season opener in Ocala, Fla. to get the year started off on the right foot with his new Goacher Racing team. In fact, Windom has a total of five USAC wins at the Action Track, four total in National Sprint Cars and one in Silver Crown.

Bacon’s win at Terre Haute late last year isn’t the only one on his resume. The Broken Arrow, Oklahoma native’s first one came in 2014, one of four occasions the Dynamics, Inc. No. 69 has gone to victory lane at Terre Haute, along with Robbie Stanley in 1993, Tracy Hines in 2003 and Jerry Coons, Jr. in 2010, the latter of which is team’s lone “Hulman Classic” score.

Fort Branch, Indiana’s Chase Stockon has tallied a pair of USAC Sprint wins at Terre Haute, in 2012 and 2016. He’s itching to get his first series victory of the year and is fourth in the standings, 51 points behind point leader C.J. Leary, Kevin Thomas, Jr. and Tyler Courtney.

Leary, of Greenfield, Indiana, hasn’t yet won a USAC Sprint race at Terre Haute, but did reach the promised land in a Silver Crown car there, taking the 2016 “Sumar Classic” for his first win in that division. Justin Grant, who Leary passed late in the going that particular day, is also seeking USAC Sprint win number one at Terre Haute after winning the “Sumar” in 2018.

Broken Arrow, Oklahoma’s Jason McDougal finished in the top-two in each of his first two Terre Haute appearances last season, a seventh in July and a 10th in September. Carson Short, of Marion, Ill., has set fast time twice already this year and finished fifth last weekend in his most recent outing at Eldora.

Chad Boespflug, of Hanford, Calif., came oh-so-close to his Terre Haute breakthrough in late-2016, coming up three laps short of victory and finishing second behind Windom. Willow Branch, Indiana’s Isaac Chapple, meanwhile, is coming off his best run of the season, an 18thto 10th run last weekend at Eldora that netted him hard charger honors.

“Tony Hulman Classic” activities get underway with pits opening at 3pm eastern, drivers meeting at 6pm and cars on track at 6:30pm, with qualifications and racing to immediately follow. Tickets are $25 for adult general admission and $15 adult infield tickets. Children 11 and under are FREE! Pit passes are $30 for members and $35 for non-members.

A great deal is available for those who don’t want to miss a single lap of “The Week of Indy.” A Superticket is being sold for a savings of 25% off of the regular three-day prices for the Wednesday, May 22 “Tony Hulman Classic” for USAC AMSOIL National Sprint Cars at the Terre Haute Action Track, the Thursday, May 23 “Hoosier Hundred” for USAC Silver Crown at the Indiana State Fairgrounds and on Friday, May 24 for the Dave Steele “Carb Night Classic” Silver Crown race at Lucas Oil Raceway at Indianapolis.

For just $60, a savings of $20, a fan will receive general admission at Terre Haute and Lucas Oil Raceway as well as a reserved seat for the Hoosier Hundred. To purchase a Superticket, visit https://usacracing.ticketspice.com/2019-week-of-indy-ticket-sales.

For more information on any of the events, visit http://www.trackenterprises.com/ http://www.usacracing.com/, or call the Track Enterprises office at 217-764-3200.