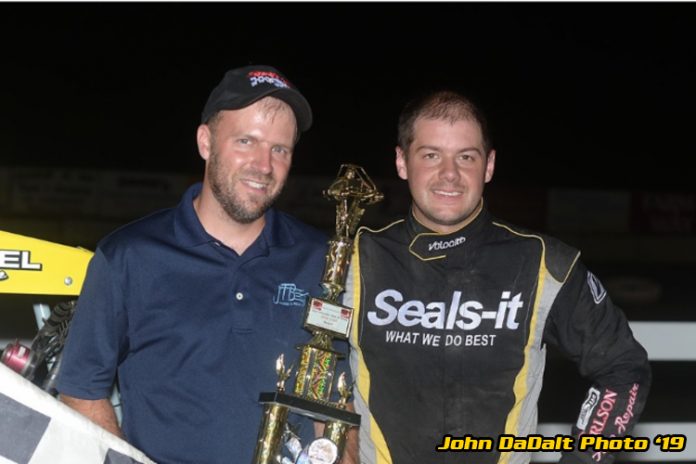 Joining the series this night was Jack Arute driving the Haskell Motorsports number 10. Arute is best known for his time reporting the racing action from pit road for ESPN and ABC Sports during Indy Car races.

Heat race one (8 laps) began with the 17 of Justin Sheridan from Suffield, CT on the pole and the 42 with Manny Dias of Danielson, CT starting outside row one. Under green it would be the 42 of Dias to the lead but his time in control of the pack would end by lap two when Justin Phillips in the 16 of West Suffield, CT would take the lead of heat race one and never looked back. The top three of Phillips (16), Dias (42) and Sheridan (17) would run nose to tail for the remaining laps until the checker flag would waive at the end of lap eight. Phillips would win the heat race is the 16 Miller Racing USAC DMA Midget followed by Dias in the 42 and Sheridan’s 17.

Heat race two (8 laps) had the 1B with Joe Krawiec of Granby CT starting pole position and Jeff Champagne of Westfield MA in the 77 starting next to Krawiec. From the start of this race Krawiec in the 1B would be the one to beat and maintained control of the field lap after lap. On lap two Will Hull in the 3 from Plainfield VT would move into second as Champagne in the 77 began to drop back with mechanical issues. The battle for second would then begin between Hull in the 3 and Seth Carlson from Brimfield MA piloting the 2. It was not long before the teammates of Hull (3) and Carlson (2) would swap positions now putting Carlson to second and working to catch the leader of Krawiec in the 1B. In the end, Krawiec’s 1B Miller Racing USAC DMA Midget would not be denied the win followed by Carlson in the 2 and Hull’s 3 rounding out the top three.


Onto the feature event of the evening in front of full grandstands with the fans enjoying great racing action at Bear Ridge Speedway in Bradford VT. On pole was the 17 with Justin Sheridan of Suffield CT and heat race two winner Joe Krawiec of Bristol CT in the 1B outside pole starting second. Under green and off into turn one the field would be in control of the 17 with Sheridan behind the wheel followed by the 42 of Manny Dias in second from Danielson CT who would get around the 1B of Krawiec moving the 1B to third.

Caution flag would waive on lap two for the spinning A1 of Jeff Horn. Quick yellow then back to green with Sheridan’s 17 still in control and the 42 of Dias for second. On the charge forward would be the 2 of Seth Carlson from Brimfield MA and Will Hull in the 3 of Plainfield VT. Lap four would being the field back together again for the yellow flag brought out by the 77 of Jeff Champagne from Westfield MA spinning in turn four. With the track ready to go, it was green lap action once again and the 17 of Sheridan kept his lead until lap seven when Carlson’s 2 would move around Sheridan’s 17 and take over the lead.

After starting the feature in seventh, the 12 of Adam Whitney from Warren VT would charge into second place on lap nine with the 3 of Will Hull from Plainfield VT now into third and Krawiec’s 1B to fourth. The top four would put on a show for the fans by racing hard each lap and trying to out duel each other. The race would stay green to the end and on lap twenty five when it was all done, Seth Carlson in his yellow number 2 would get win number two of the season. Following Carlson would be the 12 of Adam Whitney in second and for the third spot was Will Hull piloting the 3.

The series will be back in action on Friday night July 19th at New Hampshire Motor Speedway Dirt Flat Track in Loudon, NH.

To learn more about the USAC Dirt Midget Association, please visit the series website at www.usacdma.com or on Facebook at https://www.facebook.com/DirtMidgetAssociation