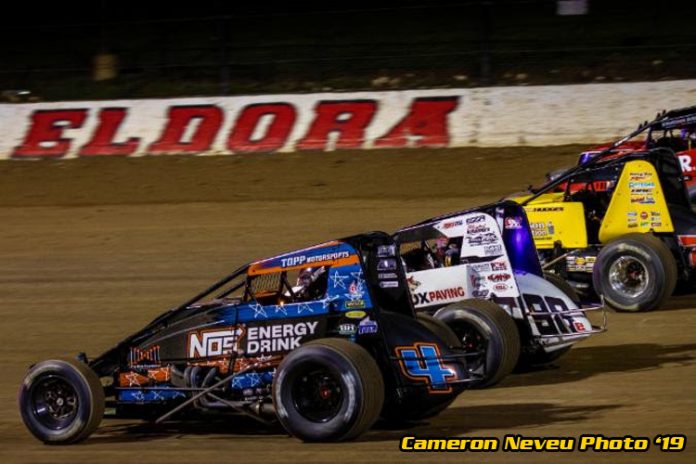 ROSSBURG, OH – The kickoff to one of the busiest stretches in the history of USAC’s AMSOIL National Sprint Car division begins this Wednesday, July 17, on the high banks of “The Big E,” Eldora Speedway for #LetsRaceTwo #TakeTwo in which the winner will take home $10,000!

The event is also the 200th for the series at Eldora dating back to Stan Bowman’s triumph at the Rossburg, Ohio half-mile in 1962. The race begins a stretch of nine races in 11 nights for the series with NOS Energy Drink Indiana Sprint Week set to follow on July 18-27.

Defending series champion Tyler Courtney (Indianapolis, Ind.) won the first the first go-around at Eldora back in May, leading the final 25 laps after taking over the lead from Kevin Thomas, Jr.. In fact, he’s won the last two there dating back to last Fall’s “4-Crown Nationals.” He’s been victorious in all three USAC National divisions over the last couple of seasons at Eldora, winning in a Silver Crown car there in 2017 and again in a Midget in 2018. The current USAC NOS Energy Drink National Midget point leader stands second in the standings with two wins, the other of which also came on a half-mile, at Pennsylvania’s Port Royal Speedway in June.

Brady Bacon (Broken Arrow, Okla.) has been the money man on the USAC AMSOIL National Sprint Car trail this year with a $10,000 win at Pennsylvania’s Grandview Speedway to open up Eastern Storm plus a $20,000 score at Knoxville Raceway in Iowa to ring in the month of July. He’s also doubled up on the field as the winningest driver in the series this year, tallying four wins, two more than his closest competitor. The two-time series champ in 2014 and 2016 won Eldora USAC Sprint Car events in both 2014 and 2018 and ran 3rd there in the Spring.

Chris Windom (Canton, Ill.) won the #LetsRaceTwo finale at Eldora in the Spring of 2018. It was his second career Sprint victory at Eldora following a win there in 2013. His Eldora record includes a pair of Silver Crown wins as well in 2013 and 2016. He ran 4th in the series visit to Eldora back in May. Windom’s already won twice with the series this season, at the opener in Ocala, Fla. as well as a May trip to Granite City, Ill. and stands fourth in the standings.

With two #LetsRaceTwo scores to his name, Californian Justin Grant (Ione) is the winningest driver in the history of the event among those expected to compete on Wednesday. The injured Robert Ballou has two apiece as well. The odd numbered years of 2015 and 2017 have been kind to Grant at Eldora in recent times at #LetsRaceTwo. Grant has won on three occasions total at Eldora, in 2015-16-17. He took an 8th this Spring at Eldora there. Grant’s latest capture of victory came in the second race of the season in Ocala in February.

Of all the entries for Wednesday’s event, no driver has more Eldora USAC victories than Lincoln, Indiana’s Dave Darland. The 1999 series champ has won in USAC Sprint Car competition at the “Big E” in 1998, 1999, 2000, 2012 and 2014, not to mention his five USAC Midget wins and four USAC Silver Crown victories. Darland flipped on the 3rd lap of the feature this Spring, finishing 23rd. He will compete for California-based car owner Dwight Cheney for the pairing’s first venture to Eldora.

USAC AMSOIL National Sprint Car point leader C.J. Leary came oh-so-close to winning the first ever #LetsRaceTwo event in 2015, leading until the final lap when Grant got by to snare the win. The Greenfield, Ind. driver has more than redeemed himself over the years at Eldora, winning his first there in a USAC Sprint Car in the Fall of 2017, then drove to a spectacular victory in the Silver Crown division last September. He’s won just once this season, picking up the finale in Ocala back in February, but his consistency has been off the charts with 12 top-ten finishes in as many starts. He was the Fatheadz Eyewear fastest qualifier in both appearances at Eldora this year, finishing 2ndon the first night before being washed out by rain the following night.

Among those looking for their initial Eldora win are Kevin Thomas, Jr. (Cullman, Ala.). He led the first five circuits before being passed by eventual winner Courtney in May at Eldora. Despite a successive run of consistency that’s positioned him in the 5th spot in the standings, Thomas remains on the hunt for his first win of the season.

Another driver looking for his first taste of Eldora victory lane is Chase Stockon (Fort Branch, Ind.) who ran 7th in May, one his 12 top-ten finishes in 12 starts, joining Leary in that exclusive club which hadn’t been achieved by any driver in the series in the previous 15 seasons. The one-time winner this season is third in the standings.

Jason McDougal (Broken Arrow, Okla.) has two career USAC Sprint starts at Eldora, last Fall and this May where he finished 9th. Over the past month, he’s become a winner in the Sprints (Swedesboro, N.J.) and Midgets (Fairbury, Neb.). He’s shown his prowess for taking on the high banks in his Silver Crown debut in late 2018 where the driver who stands 9th in points collected a 4th place finish.

Pleasant Hill, Ohio’s Matt Westfall was the Eldora hero in 2006 when he won his first and, so far, only career USAC National Sprint Car feature. The versatile driver finished 13th in the Spring at Eldora and recently had a solid top-ten effort on the half-mile at Knoxville, Iowa.

Fifth-place in May at Eldora, Carson Short (Marion, Ill.) looks for his first win with the series in three years while past Rookies of the Year Timmy Buckwalter (Douglassville, Pa.), 20th in May, as well as Isaac Chapple (Willow Branch, Ind.) are out to get their first series wins. Chapple grabbed a career-best 3rd place finish last Fall at Eldora and was 10th in the Spring. Dallas Hewitt (Troy, Ohio) nearly pulled off his first career USAC Sprint win during #LetsRaceTwo in 2017, finishing 2nd behind Grant.

Tickets sales begin at the main gate and turn four for this Wednesday’s #LetsRaceTwo at 1:30pm Eastern both days. The turn 3 pit gate opens at 2pm, spectator gates open at 2pm, drivers meeting begins at 5pm with cars set to hit the track at 6pm.

You can watch the USAC portion of the event LIVE on FloRacing or listen LIVE on the USAC app. Follow along with live updates on https://www.facebook.com/usacracing/ and https://twitter.com/USACNation with live timing and scoring available on the USAC and Race Monitor apps.