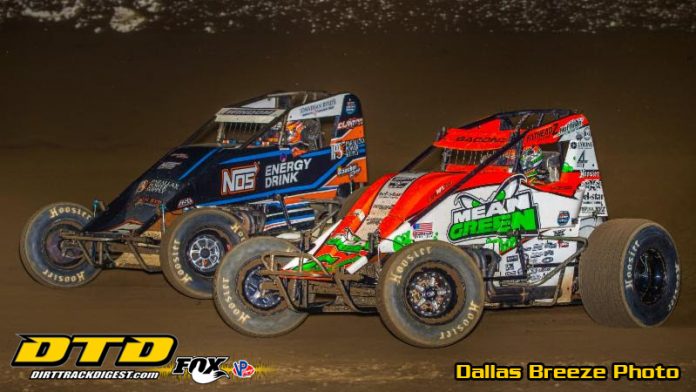 KOKOMO, IN – When compiling statistics prior to the start of this year’s NOS Energy Drink Indiana Sprint Week, one of the tidbits that stood out, and was hard to fathom, was the fact that it had been eight years since Chris Windom had won a feature event during ISW.

In that time span, Windom had become a two-time USAC National champion, added another Indiana Sprint Week title to his resume as well as multiple Eastern Storm championships all while developing into one of the top stars of his era. But, year-after-year, Windom’s ISW win record had remained stagnant despite being in contention for the victory in a multitude of races throughout that span.

Saturday night at Kokomo Speedway, the Canton, Ill. native stuffed that stat in the garbage bin after leading the final 12 laps, which included a tight green-white-checkered tussle with Brady Bacon from which Windom prevailed, for his second career ISW victory and the 24th of his USAC AMSOIL National Sprint Car career, surpassing A.J. Foyt and Roger McCluskey on the all-time list.

“After winning Sprint Week last year, I honestly kind of forgot that I hadn’t had won one since 2011,” Windom admitted. “I heard that stat this week and it kind of pissed me off. So, I really wanted to get one this week. Like I told my guys, I wasn’t going to lose that for them after busting balls above the cushion for 28 laps like that.”

That he did, after starting third in the main event which, at first, began much as it started. Windom and pole sitter Bacon battled for the position on the opening lap while Scotty Weir crashed the party, splitting between the two with an impressive move entering turn three to take the lead.

After nipping both at the line as they remained nearly three-wide coming off turn four, Weir secured the position around Bacon off turn two and began to build a gap of nearly two seconds while the battle raged behind him. C.J. Leary entered the fray, slipping by Windom on the bottom momentarily off turn four on the second lap. A lap later, the two swapped positions on both ends of the racetrack, one diving in and the other countering underneath.

Windom used the diamond move off the top of turn three to run down Leary and drive past the ISW point leader into turn one the following lap. Bacon utilized the same diamond maneuver in turn three on lap five. Meanwhile, Windom threw a massive slider into three in front of Bacon. As Bacon was rolling downhill off the top of turn three, his momentum was stifled as Windom drove past to beat Bacon to the line by a car length.

Less than a lap later, Dakota Jackson flipped at the exit of turn four while running 19th. He walked away under his own power.

With 12 to go, Windom began to pressure Weir into turns one and two. Weir hopped on the curb in turn two, opening the door for Windom to drive underneath for the lead entering the back straightaway. Weir went back into attack mode, sliding across the nose of Windom for the lead entering turn three. Windom was quick on his feet as he put four wheels above the turn three cushion, drove under Weir once again off four to take the point by a mere car length as the two frontrunners passed under Tom Hansing’s flags.

“I watched the B-Main and I actually watched Dave Darland come from the tail,” Windom explained. “He was running that same line, so I knew it would probably end up working in the race. This place, after a few laps, it just seems like momentum always wins here. You’ve got to find out how you can generate the most speed around the track and that’s what I figured out. Once I could get my momentum and run that diamond line the way I needed to, we ran Scotty down. Once he bobbled a little bit, we got by him.

With seven to go, 2016 ISW champ Bacon maneuvered around the outside of Weir in the second turn for the second spot. At that moment in time, Windom’s advantage was roughly 10 car lengths, but Bacon chopped it up to narrow the distance little-by-little by the time Anthony D’Alessio, making his first career USAC start, spun in turn four to necessitate a yellow with just two laps to go.