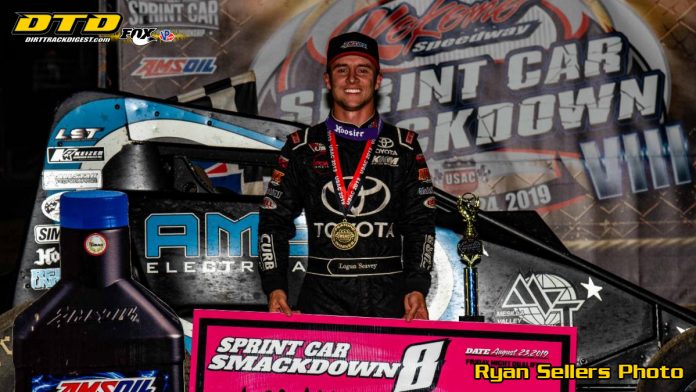 By: Richie Murray – USAC Media
KOKOMO, IN – One night after claiming a victory in Sprint Car Smackdown’s annual karaoke contest, Logan Seavey was singing a different tune Friday night on the track at Kokomo Speedway, ending it on a high note in victory lane following his first career USAC AMSOIL National Sprint Car triumph.
The reigning USAC NOS Energy Drink National Midget champion used his voice to win karaoke hardware with Garth Brooks’ “That Summer” after a broken wheel cover ended a solid run on track on Thursday.  For the Sutter, Calif. native, however, tomorrow would come, and he’d use his right foot to capture an even bigger trophy, a bigger payday and the prestige of becoming the series’ first “first-time” winner of the 2019 season.
Along the way, Seavey cut a new record, ripping 30 laps around Kokomo Speedway 33 seconds quicker than the previous USAC AMSOIL National Sprint Car track record for that distance at the quarter-mile, a record formerly held by Bryan Clauson set during Smackdown in 2013, at six minutes and 48.92 seconds.
Seavey is emerging as a jack of all trades following three wins thus far on the USAC NOS Energy Drink National Midget tour, then recently winning the pole and finishing fourth in last Sunday’s ARCA Stock Car race at the Illinois State Fairgrounds, and now jumping into a sprint car and taking it right to the front with limited seat time.  Despite all the accolades, Seavey remains humble and appreciative of the opportunity, and the fun that comes along with it. 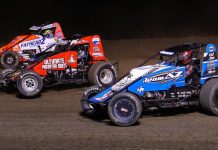