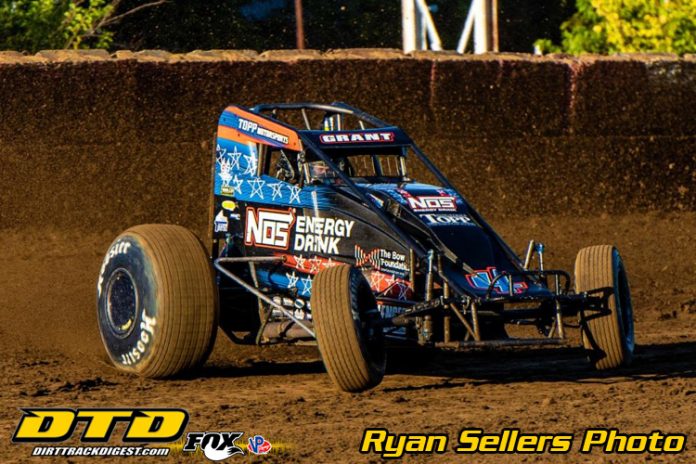 By: Richie Murray – USAC Media
TERRE HAUTE, IN – Justin Grant remembers going a long way in his first visit to the Terre Haute Action Track in 2010.
Friday night, the Ione, Calif. native showed he’s come a long way in another aspect since his humbling introduction to the famed western Indiana half-mile nearly a decade earlier, winning the 20th running of the Jim Hurtubise Classic for USAC AMSOIL National Sprint Cars, his first Sprint Car win of any kind at the track.
“In my first race here in 2010,  I sailed it out of the park in turn one and I smashed a guy’s Buick or Plymouth, or something, whatever it was,” Grant recalled.  “I made it a long way out there too.  Terre Haute had my number for quite a while and it’s taken me nine years to finally get a win here, but we did it, and it feels really good.  At one point, it was probably my worst track on the tour.  To come here and win, it means a lot to me personally.”
Grant, a 2018 Sumar Classic Silver Crown winner at Terre Haute, had a topsy-turvy turn of events to begin his night.  Shortly after racing from 5th to 1st to win the first heat race, on his cooldown lap, Grant encountered trouble, without warning, that nearly spelled complete disaster.
“We had a left front radius rod come apart, and you can’t steer,” Grant explained.  “The axle rolls back and falls off the arm.  I lifted off of (turn) two, and halfway down the back stretch, it started squirrelling all around and I thought ‘Whoa, we got a problem here.’  I knew the front end was falling out, and when you get on the brakes, it just folds them up.  I was just trying to coast it to a stop; I got it whoa’d down pretty slow, then it dropped, and the frame rail dug in and it just turned me right into the inside wall.  Luckily, it just front-bumpered into it.  No harm, no foul.  We brought it back, put a bolt in it and we were ready for the feature.”