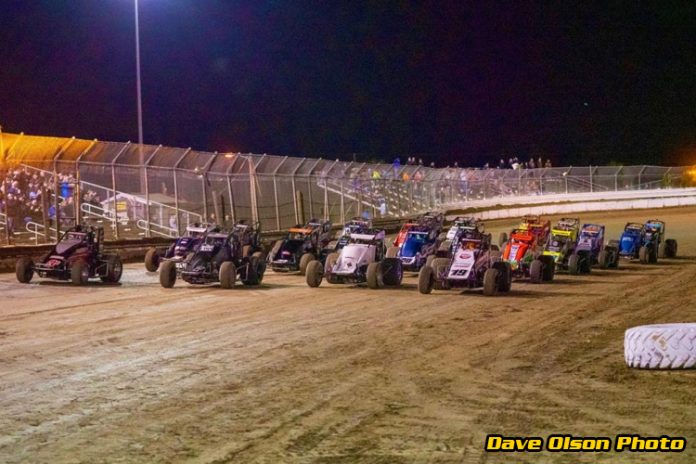 OCALA, FL – The decade of the 2020s for USAC racing gets underway in grand fashion over two consecutive weekends in February of 2020 with National Sprint Car and Midget racing in the state of Florida at Ocala, Florida’s Bubba Raceway Park.

The festivities begin on Thursday, February 6, with a practice night for the USAC NOS Energy Drink Midget National Championship, followed by two-straight nights of complete shows for the series at the 3/8-mile D-shaped dirt track on Friday, February 7, and Saturday, February 8.

The action picks up again at Bubba’s a few days later with USAC AMSOIL Sprint Car National Championship practice night on Wednesday, February 12, followed by three nights in a row of racing on Thursday, February 13, on Friday, February 14, and the finale on Saturday, February 15.

“Winter Dirt Games in February is one of USAC’s best traditions and is always one of our most looked-forward-to events,” said Levi Jones, USAC Series Coordinator. “Last year was a thrilling two weekends with the addition of Midgets to the lineup and it’s made this great event even greater. What a way to open up the season under the sunshine with both Midget and Sprint Car racing!”

While “Winter Dirt Games” has certainly proven to be a top-notch event among drivers seeking to get their season started off on the right foot, it’s also been the same for fans who exit the winter weather for a much-needed foray into the “Sunshine State” to witness the series’ lone appearance in the state during the year.

“This has become a must-see event that everybody circles on their calendars,” track owner Tom Bean said. “We thoroughly enjoy the USAC fans and race teams that make the trip to Bubba Raceway Park each year for the Winter Dirt Games, and in 2020, the tradition continues while getting even bigger and better with two premier USAC divisions on board again. We can’t wait to get the 2020 season started in a big way!”

The first three USAC Sprint Car races ever held took place in Florida in February of 1956. Bob Sweikert won the first such race at Southland Speedway in West Palm Beach, followed by Chuck Weyant at Jacksonville Speedway and Pat O’Connor at Medley Speedway in Miami.

Likewise, Florida and USAC Midget racing have a history dating back to the initial years of the club. Only 20 times have USAC Midgets ventured to Florida over the years. Prior to the 2018 visit to Bubba’s, the series took part in a 11-race series entitled the Tangerine Tournament in early 1957. Jimmy Knight, Sonny McDaniel, Andy Linden, Al Keller, Al Alpern, Leroy Warriner and Len Duncan were among the winners held at several different Florida venues. Linden took home the overall Tangerine Tournament crown.

USAC Midgets took on the pavement of New Smyrna Speedway in 2013, won by Bobby Santos and Kyle Larson. The first USAC National Midget points races in Florida came in a week span during 1963. Johnny Riva and Bob Wente were victorious at Palmetto Speedway while Chuck Rodee and Wente also picked up victories at Golden Gate Speedway. It was another 42 years before the series returned in 2005 for a non-points special event at Orlando Speed World Speedway, won by Josh Wise.

Additional info on the events will be made public in the coming months.