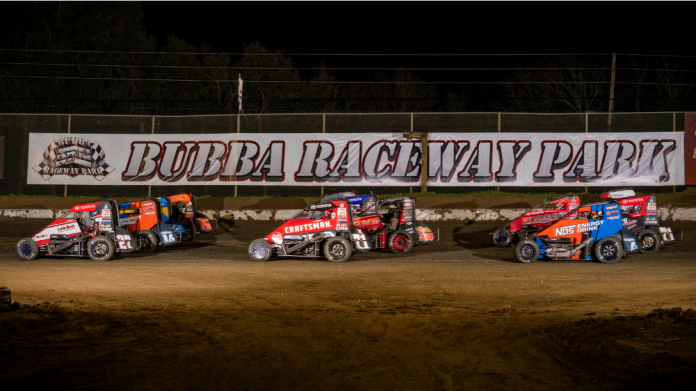 OCALA, FL – A new year beckons, and all the questions for the 2020 USAC NOS Energy Drink National Midget season will be answered in due time with the opening of the season nearing, February 7-8 at Bubba Raceway Park in Ocala, Fla., for the second straight year at Winter Dirt Games XI.

Of course, what’s top of mind to many observers are the plethora of new driver/team combos that have amassed throughout the winter months. Much of last year’s field remains intact for this year’s edition. However, many find themselves in new cars, new colors and new surroundings.

One that remains is the driver and team that captured both nights of last year’s Midget events in Ocala, Tyler Courtney and Clauson-Marshall Racing. The defending driver and owner series champs return after a stellar campaign which saw them win on eight occasions during 2019, the most with the series in nearly three decades. Courtney (Indianapolis, Ind.) also won his heat on night one last year and was fast qualifier on night two. Courtney and CMR also captured two consecutive sprint wins at the track in 2018.

Courtney’s CMR teammate is Cole Bodine of Rossville, Ind. who competed on a partial schedule with the series in 2019. His 11th place run on night one at Ocala 12 months ago was his best of the 2020 season. He returns to CMR after last competing with the team in 2018 where he very nearly picked up a victory, finishing 2nd at Sweet Springs (Mo.) Motorsports Complex.

Kevin Thomas, Jr. finished as the runner-up to Courtney both nights at Ocala a year ago. On night one, the Cullman, Ala. driver established the one-lap track record for the series at the 3/8-mile D-shaped track of 13.773 sec. In 2018, Thomas swept both nights of a POWRi Midget event at Ocala, meaning in four midget starts there, he has yet to finish outside of the top-two.

Thomas is back on a Petry Motorsports squad that also includes USAC Triple Crown champ Jerry Coons Jr. of Tucson, Ariz., who took 10th and 16th at Ocala in 2019. Lincoln, California’s Tanner Carrick, the 2019 USAC Most Improved Driver and a newcomer to Petry Motorsports, finished 6th and 11th at Ocala last season in addition to scoring a heat race win on night two.

Logan Seavey (Sutter, Calif.), the 2018 USAC NOS Energy Drink National Midget champion will team alongside former KKM teammate Jesse Colwell (Red Bluff, Calif.) with Team Ripper for Ocala. Seavey came out of Ocala a year ago with finishes of 12th and 8th while Colwell was 14th and 6th on each of his two nights.

Chris Windom has joined Tucker/Boat Motorsports for 2020. Windom, the 2016 USAC Silver Crown and 2017 USAC National Sprint Car champion from Canton, Ill., finished 3rd on the opening night and 9th on the final night last year at Ocala. His 3rd place run came after starting 11th, earning him hard charger honors for the evening. Windom’s teammate at TBM for 2020 is last year’s USAC National Midget Rookie of the Year, Andrew Layser of Collegeville, Pa., a top-10 runner on night two of Ocala in 2019.

Tanner Thorson (Minden, Nev.) scored a pair of top-ten runs at Ocala in 2019, a 9th and a 7th. The 2016 USAC National Midget champion’s run to 7th came after starting from the tail in 24th. He’ll race for Hayward Motorsports at Winter Dirt Games, for whom he captured a Chili Bowl prelim night win earlier this month.

Expected returnees from last year’s field include Ethan Mitchell (Mooresville, N.C.) who took 19th at one night of Ocala in 2019, along with Noah Gass (Mounds, Okla.) who made his series debuts a year ago there, finishing 20th and 21st in a pair of starts. Chase Jones (Greenwood, Ind.) took 23rd in one Ocala appearance in 2019 while Oliver Akard (Ft. Myers, Fla.) aims to make his first feature start with the series in his home state.

Eight previous USAC National Midget points-paying events have been held in the state of Florida. Bob Wente and Tyler Courtney are only drivers to win multiple times with two apiece. Johnny Riva won the first event at Palmetto Speedway in Miami on March 3, 1963, followed by Chuck Rodee at Golden Gate Speedway in Tampa on March 6, 1963. Wente won the final two in 1963 in the Sunshine state at Palmetto on March 8 and Golden Gate on March 10.

General admission tickets for adults are $25 and $20 for kids age 11-15. Pit passes are $35 apiece. You can watch all the action live on www.FloRacing.com or listen to free audio of the broadcast on the USAC app or on your laptop/desktop at http://mixlr.com/usac-official/. You may also follow along with live timing from the event on the USAC app.

A practice night for the midgets opens the Winter Dirt Games XI festivities on Wednesday, February 6, at Bubba Raceway Park. Grandstand tickets are free while pit passes are $20 apiece. The Sunoco Southern Fuels Gladiators will also be on the event card with the midgets all three nights.