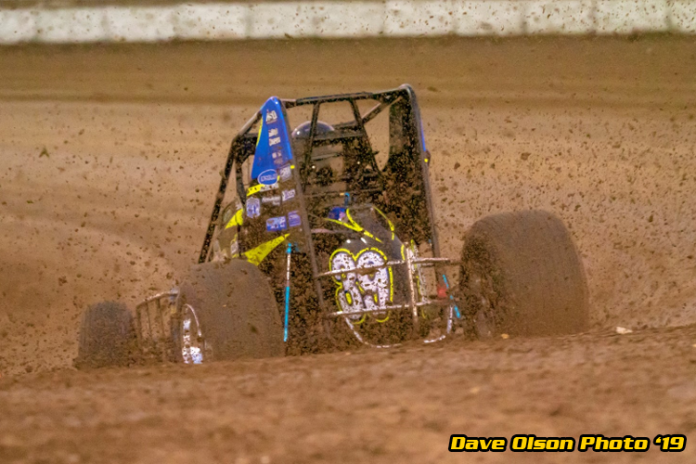 OCALA, FL – On several occasions over the past decade, winning at Bubba Raceway Park in Ocala, Fla. has served as a boon to a driver’s championship hopes and dreams.

While it’s always pertinent to launch off with a solid start to the season, the rhythm stayed true to the beat one year ago with C.J. Leary. Although he bagged just two wins over the course of the season, one of the eventual 2019 USAC AMSOIL National Sprint Car champ’s victories came in Ocala, which for the 11th time will host Winter Dirt Games Feb. 13-14-15.

At this time last year, Leary was in a similar position as he is this year – with a new team. This year, he’s linked up with Gene Gile Racing for the full tour and is the first driver in five years to sport the No. 1 following a championship season. The Greenfield, Ind. driver won the finale in Ocala one year ago.

Chris Windom (Canton, Ill.) finds himself in a similar boat, joining Hayward Motorsports for a run at the title after previously capturing the 2017 series crown. Like Leary, Windom debuted with a new team a year ago and found success right off the bat at Ocala, winning the season opener in dramatic fashion.

Ione, California’s Justin Grant returns for a third season in the TOPP Motorsports No. 4, a combo which was victorious on the second night of Winter Dirt Games last year where he took control for the final two circuits following Windom’s flat right rear tire. Grant’s picked up two victories in Ocala over the last three years after taking the finale in 2017.

Three-time Winter Dirt Games winner Robert Ballou (Rocklin, Calif.) continues to recover following a major arm injury during the 2019 season and aims to return to Ocala in time for the start of the 2020 campaign. Two of the 2015 USAC AMSOIL National Sprint Car champion’s three Winter Dirt Games victories came at Ocala in 2015 and 2016. He holds the 8-lap and 12-lap USAC Sprint Car track records at Bubba Raceway Park.

Brady Bacon, a two-time Winter Dirt Games winner in 2014 and 2015, has displayed the ability to get the ball rolling on multi-race weekends, which he did on two occasions in the past season. On a two-race weekend at Knoxville (Iowa) Raceway last July, the Broken Arrow, Okla. native swept both ends. In November at Perris (Calif.) Auto Speedway, he took two of the first three for Hoffman Auto Racing.

USAC’s winningest National Sprint Car driver (62 wins) and starter (756 starts) Dave Darland is back in the saddle of the Darland/EZR No. 36D at Ocala where he previously won in the 2015 finale at the 3/8-mile D-shaped dirt track. The USAC Triple Crown champ is one of five drivers expected to compete in this year’s event who raced in the first ever Winter Dirt Games feature in 2010 along with Grant, Windom, Ballou and Kyle Cummins.

USAC’s ironman Chase Stockon has won a USAC National Sprint Car feature in eight consecutive seasons. The Fort Branch, Ind. driver snared the WDG opener in 2018 and collected a pair of 4th place finishes on the first and third nights at Bubba Raceway Park in 2019.

Kevin Thomas, Jr. seems more than primed for victory at Ocala after four 2nd place finishes in five Winter Dirt Games starts in 2019 (2 Midget, 3 Sprint). The Cullman, Ala. native is back the seat of the KT Motorsports No. 9K. He owns the track record in the midgets and won twice in POWRi Midget competition at the track in 2018. His lone Winter Dirt Games victory came at East Bay Raceway Park in 2015.

Carson Short was superb in his qualifying efforts at Ocala one year ago, breaking his own track record on night one, then lowering it once again on the second night to 13.398 sec. The Marion, Ill. driver is set to roll in a new ride in 2020, the Daigh/Phillips Motorsports No. 71p with whom Darland won at Ocala in 2015.

Taking over for Leary in the seat of the Reinbold/Underwood Motorsports No. 19AZ is 2018 USAC NOS Energy Drink National Midget champion Logan Seavey (Sutter, Calif.). The six-time USAC Midget winner and 2019 night two Sprint Car Smackdown winner at Kokomo (Ind.) Speedway makes his first sprint car appearance at Ocala since 2018 where he finished a best of 9th in the opener. He took 8th and 12th in last year’s midget events at Winter Dirt Games.

Princeton, Indiana’s Kyle Cummins, who won on three occasions in USAC Sprint Car competition in 2019, finished on the podium in all three Winter Dirt Games sprint races at Ocala in 2016 with a 2nd and two 3rd place runs. Stephen Schnapf (Evansville, Ind.) had a career-best 2nd place finish behind Cummins during Indiana Sprint Week at Tri-State Speedway in Haubstadt, Ind. last summer. Schnapf will return to Ocala after making his WDG debut in 2019, finishing a best of 16th on the final night.

Each night, general admission tickets for adults are $30 and $20 for kids age 11-15. Pit passes are $40 apiece. You can watch all the action live on www.FloRacing.com or listen to free audio of the broadcast on the USAC app or on your desktop/laptop at http://mixlr.com/usac-official/. You may also follow along with live timing from the event on the USAC app.

A practice night for the sprints opens the second week of Winter Dirt Games XI festivities on Wednesday, February 12, at Bubba Raceway Park. Grandstand tickets are free while pit passes are $20 apiece. The Bilstein Modified Lite Stars will also be on the event card with the sprints all three nights.