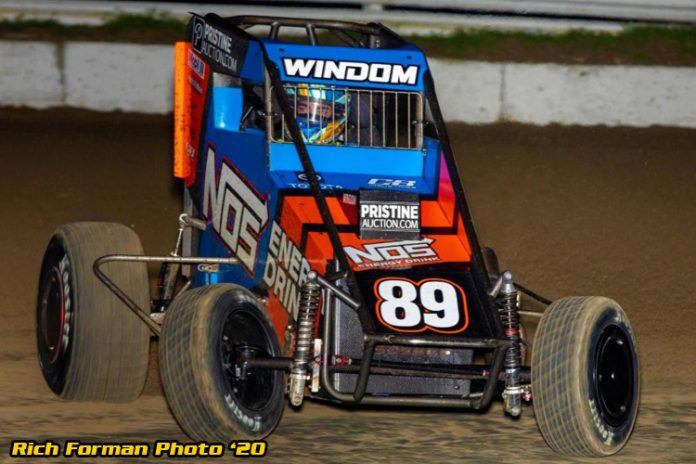 OCALA, FL – Chris Windom’s second race as a member of Tucker-Boat Motorsports began much the same as his first the night before by having to quickly make up ground and dig his way into contention after starting behind the eight ball, and the first three rows.

Saturday night in the Winter Dirt Games XI finale for the USAC NOS Energy Drink Midget National Championship, Windom immediately shed his starting spot of 10th with the snap of finger, climbing into the top-five by lap two and, ultimately, into the lead with six laps remaining, capitalizing on a golden opportunity that arose following engine trouble for race leader Tanner Thorson.

The victory provided a third career series feature win for the Canton, Ill. driver who joined TBM for the 2020 campaign and admitted to gaining an extra sense of personal motivation for he and his NOS Energy Drink – Pristine Auction – K & C Drywall/Spike/Speedway Toyota.

“I think I was just kind of pissed that I had to start 10th, so I was driving as hard as I could from the start of the race,” Windom said. “I knew our cars were good enough to be up there. With the format change this year, it moved us back a row and we had to come from 10th there. We’ve been good here all week, especially in the features, and (car owner) Chad (Boat) has brought some badass racecars for us this year.”


“To get a win the first weekend out, that’s what you strive for at the start of the year,” Windom added. “Hopefully we can keep it rolling because we’re here to win a bunch of races and win the championship.”

From the get-go, however, it once again looked like it was going to be Thorson’s stage after capturing the prior night’s season opener at the 3/8-mile D-shaped dirt track.

The 2016 series champ set a brand new one-lap track record in qualifying, then proceeded to carve his way from sixth to second on the opening lap, splitting between Petry teammates Kevin Thomas Jr. and Tanner Carrick in turn two, then sliced beneath pole sitter Tyler Courtney for second between turns three and four.

Cannon McIntosh controlled the field from the start but was rapidly encroached by Thorson’s blitz that carried him into the race lead under McIntosh entering turn one on the fourth circuit.

The first yellow of the night arrived on lap 11 when seventh-running Tanner Carrick clipped an infield tire in turn three while negotiating lapped traffic, causing the car to stall to a stop in turn four. The 2019 USAC National Most Improved Driver restarted from the tail but came back to finish 10th.

The ensuing restart was where Windom turned up the wick, driving by McIntosh for third on the 14th lap, then underneath Courtney for second on the back straightway on lap 15.

Windom’s motive was now right in front of his visor and within a reasonable striking distance. However, the gap between the two wasn’t about to close at this rate with Thorson ripping several of his fastest laps of the race through the mid-section to construct a 1.5 second advantage with just 10 laps remaining.

However, with six laps remaining, just when you thought Thorson had all but sewn up a weekend sweep of Winter Dirt Games XI, his evening and his ride went up in a cloud of smoke, prematurely ending a superb weekend and handing the lead over to Windom, who felt like his car was just as good as Thorson’s but may not have had enough to run him down if the race went clean and green the remainder of the way.

“I knew he was going to be good again,” Windom admitted of Thorson. “I felt like we were just as good as him once we got to second. We probably didn’t have the speed to run him down and pass him because it’s just such a wide-open track. When there’s that caliber of cars out there, you’re not going to be a lot better than the next guy. You’ve got to put yourself in position to get there and that’s what we did.”

From that point forward, Windom was undeterred like a vapor trail in the empty air, distancing himself from Courtney by a 1.134 second margin at the checkered to earn the first USAC National Midget victory for a car numbered 89 since Parnelli Jones’ 100-mile triumph at the Milwaukee Mile on August 12, 1961, for car owner Chuck Benda.

“To get a win the first weekend out, that’s what you strive for at the start of the year,” Windom said. “Hopefully we can keep it rolling because we’re here to win a bunch of races and win the championship.”

In the process, Windom earned KSE Products/ProSource Hard Charger Award for the night, advancing nine positions from 10th to 1st and also collected the most cumulative passes over the course of the two nights of feature racing with 14, earning a $200 Passing Master bonus from ProSource in the process.

Tyler Courtney came out of Ocala last year with two victories in two nights. Although 2020 didn’t find the exact same winning results, the Indianapolis, Ind. driver and his Clauson-Marshall Racing/NOS Energy Drink – ZMax/Spike/Stanton SR-11x exited Winter Dirt Games XI with a fourth on Friday and a runner-up finish on Saturday.

“Unfortunately, when you start on the pole, you want to win because that’s the best place to start,” Courtney said. “It just wasn’t in the plans this weekend. We came down here and won both races last year but weren’t able to get it done this year. We’re still learning a bit on the cars and stuff like that. We’ve got a really good racecar, but there’s just a few things to do here and there. I’m really happy with (our car) and our whole Clauson-Marshall team. We’re looking forward to the rest of the season.”

“I can’t thank (my crew) enough for all their hard work,” Layser praised. “They’re so precise on everything to make sure (teammate) Chris (Windom) and I have great cars every time. It’s really exciting to put together my first podium finish and hopefully many more. Last year, I struggled with confidence a lot. To start off the season as well as we have is really huge. It started at the Chili Bowl where we had a lot of speed. I knew we were good last night, and it showed tonight.”