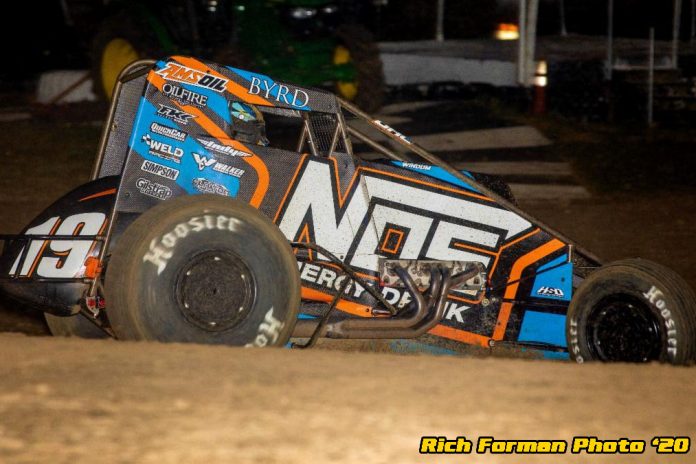 Hayward Motorsports has gotten off to a hot start in USAC competition thus far in 2020. With the midget last weekend at Bubba’s, the Hayward team won Friday night’s feature with driver Tanner Thorson, then established a new one-lap track record on Saturday, again with Thorson.

Windom was followed in Wednesday’s practice by two-time series champ and two-time Bubba’s USAC Sprint winner Brady Bacon (Broken Arrow, Okla.) at 13.683. Kevin Thomas Jr. (Cullman, Ala.), who is seeking his first Bubba’s win after being the only driver to finish in the top-five in all three series starts last year at the track, was third at 13.731. Chase Stockon (Fort Branch, Ind.), a 2018 Bubba’s winner, was fourth at 13.737, while Kyle Cummins (Princeton, Ind.), who finished on the podium at Bubba’s all three nights in 2016, rounded out the top-five at 13.804.

Bacon tested two different cars in Wednesday’s practice, the No. 69 and the backup No. 69OT, which he took to eighth fastest overall. USAC Triple Crown champ Dave Darland also competed in two different cars for the EZR/Curb-Agajanian team, timing in 21st out of the 29 drivers that hit the track.

No major incidents occurred during the night. Connor Leoffler (Myrtle Beach, S.C.) spun in turn two but continued on without contact. Evan Mosley (Lapel, Ind.) had flame erupt from the engine compartment of his car, forcing him to stop on the track. Reigning series champion C.J. Leary’s new team, Gene Gile Racing, changed engines on their ride, but the Greenfield, Ind. driver returned to compete in the final session of the night, taking the 18th overall best time.

Each night, general admission tickets for adults are $30 and $20 for kids age 11-15. Pit passes are $40 apiece. You can watch all the action live on www.FloRacing.com. You may also follow along with live timing from the event on the USAC app as well as on the Race Monitor app.