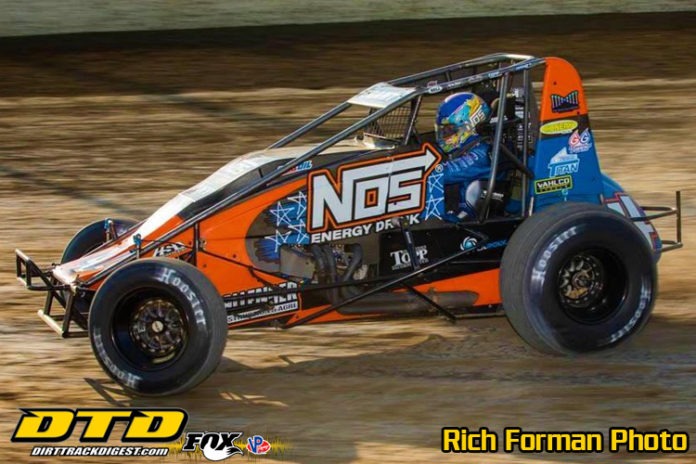 PEVELY, MO – Less than 24 hours after driving to his first USAC AMSOIL National Sprint Car victory of the season, Justin Grant did the deed again, sweeping the weekend capper Sunday night at Federated Auto Parts Raceway at I-55 in Pevely, Missouri.

Grant led wire-to-wire on Saturday night at 34 Raceway in West Burlington, Iowa after starting from the outside of the front row and leading all 30 laps in his TOPP Motorsports/NOS Energy Drink – TOPP Industries – The Bow Foundation/Maxim/Claxton Chevy. On Sunday, he was once again in the same position, outside the front row in the feature starting lineup.

Grant drew the last pill in the qualifying draw, but the Ione, Calif. native went against the grain, shunning conventional wisdom and instilling the idea within that the track would slow him up just enough to eventually put him on the front row for the feature. He believed it, and that’s just how it played out after qualifying third fastest in flight two.

After snaring the lead from polesitter Chase Stockon at the line on the second go-around, Grant led the remainder of the 29 laps to score his 18th career USAC AMSOIL National Sprint Car victory, moving him past Jerry Coons Jr., Parnelli Jones and Bud Kaeding for sole possession of 30th all-time.

Grant’s fountain of confidence in current times is quite apparent, and he readily admits a successful run such as this after mighty struggles on occasions, is pretty sweet.

“When you’re hot, you’re hot. It’s like you can’t miss,” Grant exclaimed. “Car’s always perfect. Everything always works out. It’s pretty magical when it’s like this. It’s not always like this, and I’ve done this enough to know that it can swing back the other way, but we’ll work our butts off to make sure it doesn’t for as long as we can.”

Once Grant took the lead Sunday at I-55, from basically the get-go, the race was just as much a race against the ever-changing preferred line as it was against anybody else in the 22-car field. Grant swapped from top to bottom on both ends of the 1/3-mile dirt oval while Brady Bacon, winner of the first two series races in Ocala, Fla. in February, slotted into second and posted a challenge to Grant.

“Early on, the top was dirty,” Grant recalled. “The curb hadn’t really formed up yet and there was enough moisture on the bottom in three and four that I was running the top, and thought it’s pretty dirty up there and looks pretty wide down there, so I dropped to the bottom. A couple of times, I saw Brady’s nose down the back stretch. I ran the bottom in three and four until I felt like it was getting slow. I had to slow a fair bit to get off four. I thought I’d be better off blazing around the fence. I was pretty happy about that because I like blazing around the fence.”

While Grant was busy searching for happiness against the fence, Matt Westfall became the unhappy one who found misfortune against the turn two wall on the sixth lap, flipping upside down, an incident from which the Pleasant Hill, Ohio driver walked away unscathed.

Grant and Bacon remained right against the wall, albeit of the inside variety, while Chris Windom and Tyler Courtney clung to the high line to make their surge to the front. And when a caution for a Mitchell Davis spin on lap 16 cleared the traffic and the path for the leaders, Grant took off, while Windom and Courtney, in quick succession on laps 17 and 18, powered around Bacon on the topside for the second and third spot, respectively.

Grant then went back to the top while sliding himself on entry into turns one and two. At one point, with it being slick on entry at the top of turn one, he admitted he about backed it into the fence, so he recalculated and changed up his approach. When his tires held their grip across the center, he thought he’d be hard to beat if that component of the track’s surface remained.

“It was kind of sketchy because there was a hole on the bottom of one and two where the moisture was,” Grant recalled. “I’d come blazing through there wide open and it’d get to bucking and it would bounce all the way across the slick in the middle of one and two, then bash into the cushion off two. Sometimes it’d blow through and bash into the wall.”

“Three and four got pretty ledgy,” Grant continued. “But you’d make really good time getting into the ledge hard exiting four, but it would get you tight if you weren’t careful. I got tight a couple times at the fence off four. That was a lot of fun. That’s how sprint cars are supposed to race, cowboy up, banging the fence and trying to keep yourself from crashing.”

After a yellow involving Carson Short on the 19th lap, the top-two of Grant and Windom broke away with Grant jetting out to a 1.824 second advantage that was erased when Logan Seavey slowed with seven laps remaining, a victim of a flat left rear tire.

An outstanding restart from Grant on the lap 24 resumption was the final nail for the rest of the field, though Robert Ballou used the moment to split through the gap in turn three to jump from fifth to third.

All the while, Grant put the race on ice, taking the checkered with a 1.639 second advantage over Windom, Ballou, Tyler Courtney and Dave Darland.

Grant elevated himself to the series point lead with the victory. For Windom, it was his second runner-up finish of the season. He and Grant are the only two with top-five finishes in all four series starts. A third for Ballou equaled his third place run at I-55 from two years prior. Courtney’s fourth place run in his season debut with the series came one night after finishing third in Knoxville (Iowa) Raceway’s weekly wing sprint car racing program. Dave Darland’s fifth-place finish was his best with the series since November 2018 at Arizona Speedway where finished second on the final night of the Western World Championships.

**Matt Westfall flipped on lap 6 of the feature.