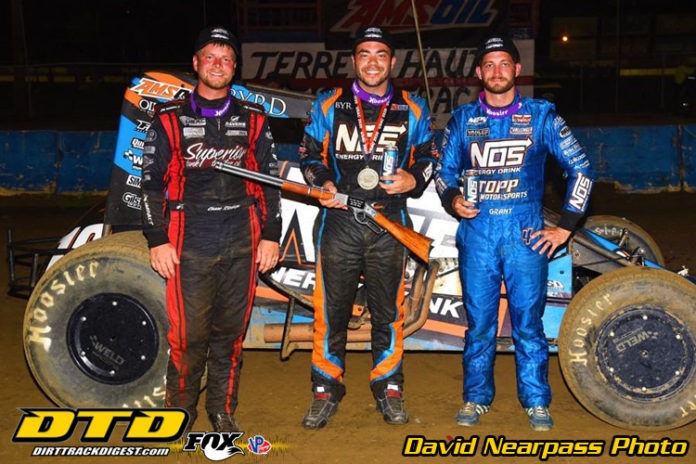 TERRE HAUTE, IN – Nine years after first holding the coveted rifle as a first-time Tony Hulman Classic winner, Chris Windom joined the ranks of multi-time winners of the event following his wire-to-wire performance Wednesday night at the Terre Haute (Ind.) Action Track in the 50th running of the race.

“This is the coolest race to win at Terre Haute. It’s one I’ve been gunning for every year,” Windom said following his 26th career USAC AMSOIL National Sprint Car victory, tying him for 18th all-time alongside Tyler Courtney, Tony Elliott and Dave Steele. “It’s been a few years since we’ve won it. This car’s been so good all year, I feel like we should’ve had a few wins already but that’s racing. It’s so tough right now in this series, it’s so tough to get these.”

Windom rolled off from the pole position for the 30-lap main event in his Hayward Motorsports/NOS Energy Drink – OilFire – B & H Contractors/DRC/Claxton Mopar, breaking away solo on the bottom at the drop of the green as the rest of the field jostled for position two-wide, high and low, behind him.

In the early stages, it was and would remain a two-horse race throughout the majority of the feature as Windom led a two-car breakaway from the rest of the pack with Brady Bacon, who started 6th. Earlier in the night, Bacon recorded his 35th career Fatheadz Fast Qualifying time, equaling him with Rich Vogler for 7th all-time. It was also Bacon’s 3rd career Tony Hulman Classic fast qualifying effort, joining Vogler atop the all-time list in that category for the event.

The pair, who got together in an early-race collision in the most recent series race last weekend at Plymouth (Ind.) Speedway that sent Bacon flipping, remained glued together as the two raced through lapped traffic just past the halfway mark of the race. Windom led the charge with Bacon lying in the weeds waiting for a chance to pounce on any hiccup suffered by Windom, who knew full well he couldn’t hold back and had to be the aggressor, or thus be the proverbial gazelle being chased down by the lion.

“At this place, you can lose so much time if you come off your line and have to mess with lapped cars for very long,” Windom explained. “I knew that if I had a shot, I had to take it. I probably crowded a few of them, but you’ve got to be aggressive here and you’ve got to do what you’ve got to do to get through them. If you don’t, the guy in second’s got a better vantage point than you do because he can go the opposite way you go.”

First, in turn one on the 18th lap, Windom followed Dustin Smith high into turn one, forcing Windom to breathe the throttle and cut back underneath as Bacon ate up some time on the interval. Then, with 10 to go after regathering himself, Windom exited turn four with both Mitchell Davis and Brandon Morin running side-by-side at the tail end of the lead lap. Windom didn’t wait, instead splitting right between the 7/10 of Davis and Morin at the start/finish line to gain some much needed air away from Bacon for the time being.

“I felt like we got through lapped traffic pretty good,” Windom recalled. “I felt like the pace I was running up top was good enough that no one was at least going to drive by us on the bottom, especially the second half of the race. I was just trying to get good restarts with all those cautions at the end and avoid getting a slider into one.

Restarts came into play on multiple occasions down the stretch, first after Davis slowed to a stop on the 26th lap, bringing an end to Windom’s 1.379 second lead over Bacon. On the ensuing restart, the action didn’t resume for much longer when 4th running Tanner Thorson slowed dramatically with a flat right rear tire between turns three and four. As the field scattered to avoid contact, 11th running Nick Bilbee ramped over Thorson’s left side wheels and flipped once over in turn four. Bilbee was okay. Thorson restarted with new rubber and drove back to a 6th place finish in the final rundown.

Once racing resumed with one more lap of green under the belt, turmoil found C.J. Leary once again on this evening as he stopped at the top of turn four after charging from 22nd to 9th. Earlier in the night, the defending USAC AMSOIL National Sprint Car champion and his team were forced to swap engines after suffering from mechanical problems in hot laps.

Moments later, under yellow, second running Bacon stopped in turn one when the engine inexplicably stopped running. There was still fuel in the tank with four laps remaining but no luck left for Bacon, the two-time series champ who was aiming for a first career Hulman Classic triumph.

That slotted Justin Grant, winner of three of the last four series races in 2020 and the winner of the most recent series race at the Terre Haute half-mile in September of 2019, into second behind Windom. The patented late-race turn one slider is a fixture at Terre Haute and Windom was prepared to expect that coming, but he also had a plan.