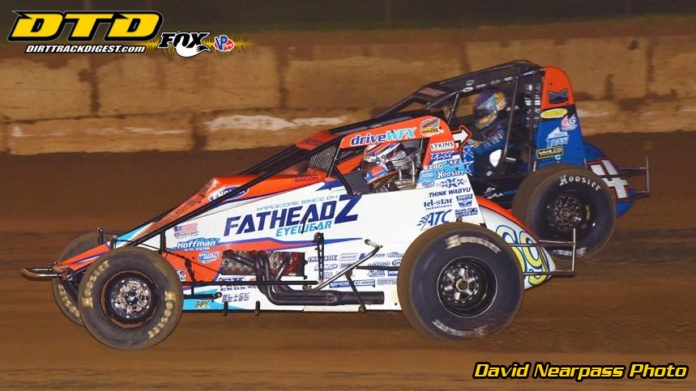 The Broken Arrow, Okla. native’s tide was seemingly turning midway through Saturday’s second and final night of the 6th annual Bill Gardner Sprintacular at Lincoln Park Speedway, co-sanctioned by MSCS, as he stormed to the lead midway through the 30-lap feature after starting 8th. Soon after, that old notion of “if it wasn’t for bad luck, I’d have no luck at all” seem to rear its ugly presence.

“When I got the lead, I think that’s when our tire started going down,” Bacon recalled of the deflation on the right rear. “I wasn’t able to make the speed I was able to make to get to the lead. I was kind of having to play defense and use the lapped cars as blockers.”

However, that tide did finally turn for Bacon on this night as everything stayed intact until the checkered flag with the tire completely going down as he rolled into victory lane for the third time this season in his Dynamics, Inc./Fatheadz Eyewear – DriveWFX.com/Triple X/Rider Chevy, just in the nick of time.


“I think if we would’ve had a yellow there at the end and that tire would’ve gone flat, I would’ve just driven it off the end of the track and came and got it later,” Bacon semi-joked.

Bacon’s recent misfortunes began with a crash at Plymouth one week ago while running third, then snowballed with a slew of magneto issues under the hood, first with the Hoffman’s own car during a local show at Lawrenceburg (Ind.) Speedway. Then, last Wednesday at Terre Haute, Bacon was running second late when another mag failure befell him despite driving a completely different car with a different engine that night.

Following those two instances, Bacon and team changed the mag and made a trip to the dyno prior to suiting up for Friday’s first night of action at Lincoln Park. He ran hot laps, qualified and transferred through his heat race, when suddenly, another mag went out, and he was unable to fire off for the feature before being pushed back to the pit area prior to even seeing the green flag.

“That’s more mag failures than I’ve had in my entire career in the last three nights,” Bacon related. “It was frustrating to have cars we knew we’re good enough to be on the podium, at least, every night and be in contention to win and not be able to.”

“I feel like these are the nicest cars I’ve ever had and the most prepared we’ve ever been,” Bacon continued. “It’s stuff that never happens that’s not really in our control; it gets pretty frustrating. I’m thinking ‘I feel like I’m living right. I feel like I’m living pretty good. I’m not even living on the edge or anything.'”

Yet, Bacon has resolve and thrives when put behind the eight-ball. In fact, in both of his USAC victories this year coming into Saturday night, Bacon was the KSE Racing Products/B & W Auto Mart hard charger, having to come from 9th to win during each night of the Winter Dirt Games in Ocala, Fla. to start the season in February.

“We felt like we were missing a little step earlier in the night,” Bacon remembered from the beginning of Saturday night’s event. “I just made a bad decision in qualifying and kind of put us back. In the heat race, we did win, but we didn’t feel like we were good enough to win the feature. We made some changes, and obviously they were the right ones.”

Starting 8th in the 24-car field, Bacon made quite a bit of headway early on, moving to 7th on the opening lap, to 6th on the second lap, to 5th on lap four, into 4th on lap five and finally to 3rd by lap seven, interrupted only by a Max Adams lap two spin while running 5th and a lap four Stephen Schnapf flip in turn one from which he emerged without injury.

Justin Grant commanded the opening 14 laps, but nearing the halfway point, it was a tale of differing lines among the top-three of Grant, C.J. Leary and Bacon, with Grant utilizing the top of turns three and four and the bottom of one and two while Leary was glued to the bottom and Bacon was ripping the top.

On the 15th lap, Bacon was able to clear Leary off the second turn, then continued the roll to press by Grant off four to possess the lead by a nose at the stripe.

Grant attempted a succession of sliders on laps 16 and 17 into turn three past Bacon, but each time, Bacon had an answer and promptly cut back underneath Grant to reclaim the lead with Leary lurking on the bottom just about even with the two at the head of the pack.

“Justin was sliding up to the middle of four and I was leaving the gap into three really big,” Bacon explained. “It’s kind of a dangerous spot to be in even though it may be faster, but it’s not if he gets in front of me. I’m just racing as hard I could and trying to make good decisions and, fortunately, we didn’t make any bad enough to lose the lead.”

On the 19th lap, Leary was able to nip his way into second by Grant and relentlessly hounded Bacon in his pursuit to the front where he ultimately put himself in a position to pounce on Bacon when the leaders reached a throng of traffic with five laps remaining.

Leary surged ahead of Bacon while scurrying around the bottom with four laps remaining but had to readjust his line as he followed Adams on the bottom of turn one. That allowed Bacon, carrying the momentum up top, to surge back ahead of Leary off turn two, and beating the defending series champ to the line by a half-car length with now three laps to go.

Leary was able to eat up ground and briefly take the lead entering turns one and three, but Bacon shot off the exit of turns two and four each time to hold serve, barely. With two go, Bacon saw an opportunity with a slight break in the traffic to beat Leary in a race to the bottom of turn one, taking away Leary’s line.

Entering the final set of corners on the 30th and final lap, Leary was forced to follow Bacon around the infield tires while Grant made one final push off the rim as Bacon captured the victory with Leary just behind in second and Grant third in a top-three that was separated by a mere 0.172 of a second.

The car count of 57 Saturday night was the largest for a USAC AMSOIL National Sprint Car race since the Western World Championships at Arizona’s Manzanita Speedway in November of 2008.