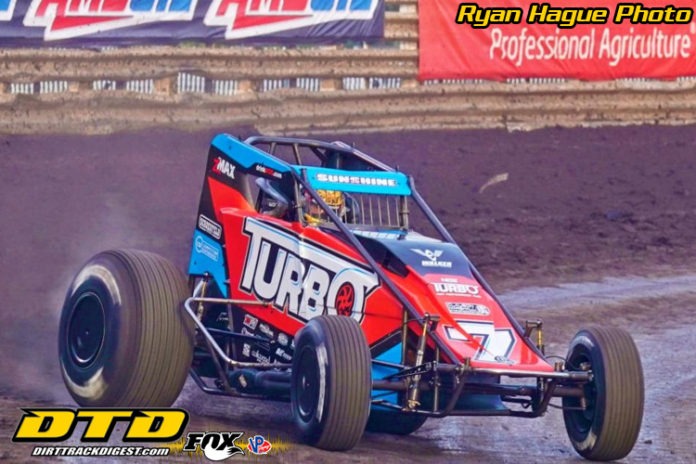 KNOXVILLE, IA – In essence, it didn’t take long for Tyler Courtney to get to the front of the field in Friday night’s Brandt Corn Belt Nationals opener at Iowa’s Knoxville Raceway.

In another sense, however, the wait was more than long enough.

The 2018 USAC AMSOIL National Sprint Car champion started 3rd on the grid for the 25-lapper, but instantly split between both front row occupants Wyatt Burks and Riley Kreisel through the middle of turn one, then powered off turn two and never looked back the remainder of the distance.

The Indianapolis, Ind. native admitted it’s been a rough and tumble couple of months for him in both the midget and his recent dabbles in a winged sprint car. Yet, Friday night, he went to the well for a sterling performance in earning his 27th career USAC AMSOIL National Sprint Car feature win, tying Kevin Thomas Jr. for 17th all-time, and notching his first with the series in 2020.

It’s something the 2018 Knoxville USAC Sprint winner considers a boon for both the morale and confidence for the Clauson-Marshall-Newman Racing team and his NOS Energy Drink Turbo – CSI – ZMax – Schoenfeld/Spike/Rider Chevy.

“(Car owner) Tim (Clauson) and the guys gave me a really good car tonight,” Courtney exclaimed. “I love Knoxville Raceway. This place is awesome in a wing car, a non-wing car; I’d like to come here in a midget, a Silver Crown car, whatever we can get here, that’d be sweet. When you sit back and think of all the guys that’ve won here, we won here once, but to put your name on the list again is just really cool.”

As Courtney stretched his lead out in the beginning stages, on the fifth lap, he encountered his lone hiccup of the night as he stumbled atop the turn four cushion, allowing second-place Riley Kreisel to close the gap. But he too would find a similar fate in the turn four fluff one lap later, causing him to hedge the pace a tad while Courtney opened the spigot once again.

On a lap eight restart, Brady Bacon began to position himself in a familiar spot at Knoxville as the Corn Belt “sweeper” from 2019 with a slide by Burks for third on the bottom of turn one, then initiated a reprise of the move again a lap later, similarly sliding by Kreisel for second.

Just after midway, series point leader Justin Grant elevated himself to third with a reminiscent turn one slider past Kreisel on the 13th circuit. Still, the 2017 Knoxville winner was more than a half-straightaway behind the two most recent Knoxville winners in Courtney and Bacon running first and second.

In traffic with nine laps to go, Courtney was scoping his way through traffic, attempting to slide Jack Wagner in turn one, but couldn’t make the move stick, causing him to lose momentum and fall in line behind Wagner which allowed Bacon to chomp the interval behind Courtney to as close as it had been all race long.

Once Courtney freed himself from the shackles, Bacon became stifled behind a wall of traffic himself and lost valuable ground to Courtney just as he was prepping to pounce. Courtney jostled out of the pack and constructed another half-straight lead over Bacon with six laps to go.

With five laps remaining, the final yellow of the night fell for the stopped car of 2020 USAC Midwest Wingless Racing Association Sprint Car winner Don Droud Jr., who came to a halt above the turn four cushion. As a result, traffic was now crystal clear ahead Courtney as was the road for Bacon to reach Courtney with nary a lapped car nestled in between.

Courtney led the field low off turn four on the restart and remained about midway up on the front straightaway before darting back to the bottom of turn one to slide himself before Bacon ever had a chance to do so himself. With the slider attempt thwarted, Courtney expanded his lead to 10 car lengths over Bacon to put a “Fin” on this story for the evening while Bacon fought tooth-and-nail with Grant for second.

Lamenting last year’s results in the inaugural Corn Belt Nationals with 4th and 3rd place finishes on each of the two nights, Courtney has primed himself to rectify those past shortcomings when he straps on the helmet for Saturday night’s $20,000-to-win finale.

“We came up a little bit short last year both nights, but we’ve put ourselves in a good spot for tomorrow,” Courtney said. “We’ll get through qualifying, our qualifier tomorrow, and hopefully be in the first couple of rows for the feature and try to take home some money.”

For second-place Bacon of Broken Arrow, Okla., the bottom nor the middle of the racing surface seemed to be there for the two-time USAC National Sprint Car champion as he made his run at Courtney in his Dynamics, Inc./Fatheadz Eyewear – DriveWFX.com/Triple X/Rider Chevy for the lead in the later phases of the feature. For him to be able to get by Courtney, Bacon explained that his competition would’ve had to make a catastrophic mistake for him to pass, so he settled into second with the intention of not making any mistakes himself, though he admitted that he did became a bit complacent late and allowed Grant to pose a threat for the runner-up spot.

For Ione, California’s Grant, his 3rd place result at Knoxville marked his 10th consecutive top-five finish in 10 starts during his 2020 campaign. Grant explained he became very tight near the end in his TOPP Motorsports/NOS Energy Drink – TOPP Industries – The Bow Foundation/Maxim/Claxton Chevy, getting noticeably tight on the curb, and didn’t have nearly enough to make a move on Bacon stick for good.

Chase Stockon set a new 12-lap USAC National Sprint Car track record during the semi-feature at a time of 4:26.089, breaking the previous record at Knoxville set by Merle Bettenhausen in 1971. 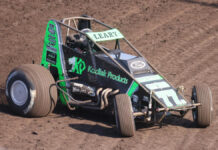