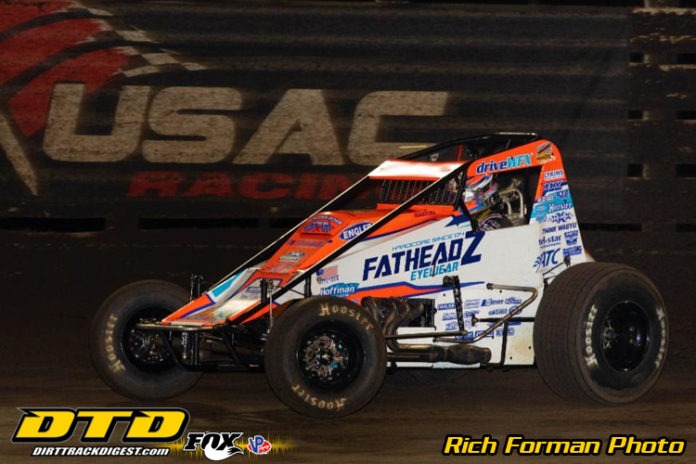 KNOXVILLE, IA – A three-and-a-half hour rain delay and an engine swap just prior to the feature couldn’t deny Brady Bacon from Brandt Corn Belt Nationals domination for the second consecutive year in the second annual event that concluded in the wee hours of early Sunday at Iowa’s Knoxville Raceway.

A heavy half-hour-long storm doused the half-mile dirt oval with moisture just prior to hot laps, forcing a lengthy delay that set back the start of hot laps until about a quarter to 11pm Central time.

When things wrapped up just after 3am with a non-stop, green-to-checkered feature, the Corn Belt king had reclaimed his throne and a $20,000 winner’s share as he captured his 33rd career USAC AMSOIL National Sprint Car feature victory, moving him past 1973 champ Rollie Beale for sole possession of 12th all-time.

Bacon and the crew on his Dynamics, Inc./Fatheadz Eyewear – DriveWFX.com/Triple X/Rider Chevy made the engine change before the feature as more of a preventative measure due to a persistent oil leak. With some down time between races, the decision was made, and they decided they weren’t going to take any chances risking it. After all, the “backup” engine has some clout all its own; it was the same engine Bacon used in his recent July 4 victory at Lincoln Park Speedway in Putnamville, Ind.


“(The crew) said it puffed some smoke,” Bacon recalled after finishing third in the second qualifying race. “We looked under the hood and there was quite a bit of oil under there. We found out where it was leaking – a fitting that goes right into the block – and we tried to take it out and put a bunch of tape on it to try to get it to seal up. We put it back in, fired it up again and it was still leaking. We didn’t want to take any chances. There’s a lot of money on the line here, so we just put our other motor in.”

Bacon started his 30-lap race from the pole position, sliding from bottom to top between turns one and two, then settling in a groove up top as Justin Grant put began his racelong chase of Bacon. Grant took a peek to the inside of Bacon in turn three on the seventh lap, but quickly fell back into line behind Bacon on the high line.

Grant remained within earshot of Bacon throughout, and on the 11th lap, Bacon played the role of offense as he split the narrow gap between Glen Saville and Dustin Clark at the tail end of the field in turn three to gain some breathing room from Grant.

“I took it a little easy the first few laps and I saw (Justin)’s nose on the (video) screen,” Bacon recalled. “I was like, ‘alright, I better pick it up a little bit,’ and I wanted to give myself a little gap getting into lapped traffic because I knew that was going to be tricky. Thankfully, we were able to make some pretty good moves in lapped traffic and hopefully keep the gap safe.”

Yet, through the middle section of the race, Grant remained just three to four car lengths back of Bacon, and if there was any ounce of a misstep by Bacon, Grant was there to pounce. Yet opportunities were scarce with the front of the pack running lockstep on the cushion.

“Keeping the gap safe” was the name of the game, and on lap 18, Bacon once again split the alley between Wyatt Burks and another at the rear of the pack just when Grant got as close as he’d get all race, nose-to-tail off turn two and down the back straightaway.

With 10 laps to go, Grant got a tad sideways above the cushion between turns three and four where he lost a measure of ground to Bacon but would reload and resume his everlong pursuit.

However, there was no slip-up, hiccup or crack-up that was going to deter Bacon on this night as the Broken Arrow, Okla. native separated himself from Grant by a 1.6 second margin with five to go and the lapped cars of Riley Kreisel and Logan Seavey now serving as the buffer between the pair.

“The Knoxville crew worked really hard getting the track ready for us,” Bacon commended. “Obviously, I thought the track was pretty good, but it was a little treacherous up on the cushion. I was like, ‘man, when is that white flag coming out?’ I didn’t even have time to look at the (video) board because the exits were so tricky, you’d pop a wheelie and push into the fence if you weren’t careful.”

The win was the fourth of Bacon’s career at Knoxville, the same place where he made his first career USAC starts 14 years ago in a midget during the 2006 season. Success came naturally to Bacon at Knoxville those particular nights, finishing as the runner-up on back-to-back occasions as a 16-year-old, a run of success that continues to this day.

“I’ve always loved racing here,” Bacon said. “My first ever USAC race was at Knoxville. I think I just have a lot of laps here. I think that adds to me getting around here pretty good and I can kind of read it when a lot of these guys really haven’t gotten to race here much. Last night didn’t really play a big role, but tonight, I think I was able to work through traffic a little bit better knowing what I could and couldn’t get away with.”

Meanwhile, Robert Ballou set two brand new track records for sprint cars without a wing at Knoxville. His 10-lap performance in the third heat race of 3:09.379 lowered the previous record set by Richard Griffin in a 1991 CRA event by more than 10 seconds. Ballou’s 16-lap time during the semi-feature of 5:25.068 broke the former record at Knoxville set by Eddie Leavitt in 1978 by a whopping 18 seconds.