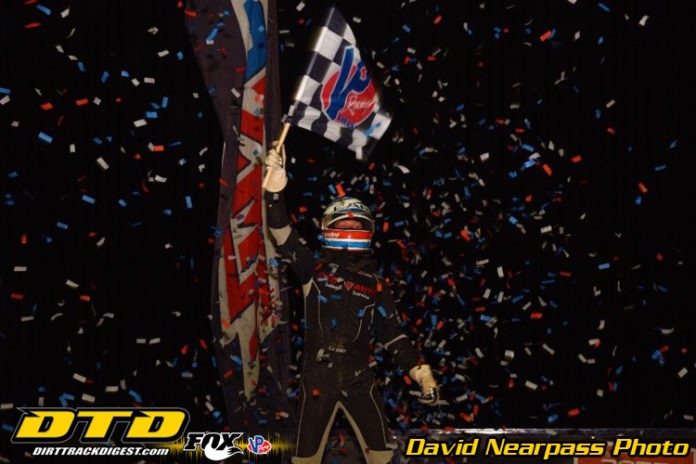 KOKOMO, IN – In most aspects of life, an individual creates their own luck by being in the right place at the right time all while performing to their maximum capabilities.

However, on occasion, sometimes a stroke of luck is what it takes to make that final extra push to propel one to the brink of success.

Following an incident in Friday night’s NOS Energy Drink Indiana Sprint Week opener at Gas City in which he was running 4th and collected multiple other front running cars, C.J. Leary found lady luck back on his side following a spin by race leader Tyler Courtney with just three laps remaining Saturday night in the second round of NOS Energy Drink Indiana Sprint Week at Kokomo Speedway.

From thereon, Leary was fully en route to winning time aboard his Leary Racing/Valvoline – Gray Auto – Leary Construction/DRC/1-Way Chevy, the fourth career ISW win for the Greenfield, Ind. native who captured both the ISW championship and USAC AMSOIL National Sprint Car crown the year prior in 2019.

“Last night we just stepped on it. The driver made a mistake,” Leary point blanked. “Just like what Courtney did tonight, when you’re racing as hard as we are now, mistakes happen. Sometimes, it costs more than others. To come back tonight and get a win is great, I feel like we’ve been really fast all year and we were really fast last year, and we only won two races.”

Those two victories and the championship that came along with it were part of Leary’s sensational 2019 season as the pilot of the Reinbold-Underwood Motorsports ride. The Reinbold-Underwood team won Friday’s ISW opener at Gas City with Logan Seavey at the wheel while Leary managed just a 13th place result after the incident.

It was an encounter by Leary and his former team owner during the post-race at Gas City that, as it turned out, may have provided a little bit of that good fortune for Leary come Saturday night at Kokomo.

“Last night, I went over and talked to (team owner) Andy (Reinbold) after the race. I was like, ‘man we should’ve won this one last year and now you guys won it this year for some redemption. You guys got all the luck. I’m going to pit next to you tomorrow and steal some of that luck.’ (Reinbold-Underwood Motorsports crew chief Tyler Ransbottom) came over after tonight’s race and said, ‘don’t ever pit next to me again,'” Leary said with a laugh.

Leary rolled off for the start of the 30-lap main from outside of the front row. Carson Short occupied the pole but found himself in a world of trouble as he became a little too far sideways between turns one and two on the opening lap. Leary took evasive action, tapping the breaks, then moving to the outside around Short as second row starters Justin Grant and Tyler Courtney raced by underneath, running one-two in that order at the line with Leary now third.

After leading the opening lap, Grant slid up off the bottom in turn two as Courtney motored by underneath and into the race lead. Courtney planted his car firmly on the bottom around the tires with Grant and 2016 Kokomo ISW feature winner Kyle Cummins running second and third.

On the seventh lap, Leary went for the 7/10 split between Grant and Cummins at the flag stand, first zipping by Cummins, then sliding up in front of Grant at the exit of turn two to execute a two-fer to reach the runner-up spot, then began his pursuit of Courtney and the race lead.

Ten laps in, Courtney, perhaps with a glimpse of Leary lurking beside him, altered his approach by moving topside. Leary, thus, altered his gameplan in response and dove to the bottom of turn one on the 13th lap, slide jobbing his way into the lead. However, lapped traffic was now within arm’s reach of the frontrunner, beginning a see-saw battle between the past two USAC AMSOIL National Sprint Car champions for much of the remaining duration.

Courtney gathered himself up on the bottom and raced to a near-dead-heat at the line alongside Leary with 12 laps remaining. On the following lap, Jerry Coons Jr. and Colten Cottle ran two-wide at the tail end of the lead lap, boxing Courtney in on the low groove while Leary split the gap entering turn three and led the lap by two car lengths. A lap later, on the 21st go-around, the verdict was Courtney at the line by a wheel, and vice-versa with the roles reversed on the 22nd circuit with Leary staking his claim up front for the time being.

Courtney attempted to steal Leary’s line at the top away in turn two with eight laps remaining as he slid up to the cushion. Leary never hesitated, kept his foot on the throttle, and ziplined through the eye of the needle to escape the clutches of Courtney as he raced downhill off turn two to retain the lead, which Leary then constructed to five car lengths by the entrance of turn three while Courtney aimed to regain traction and take another shot at Leary.

Leary appeared to be in as comfortable of a spot as he had been all race, hand-in-hand with the lead of the race until he slid up in front of Thomas Meseraull in traffic in turn two with six laps left on the board. Leary drifted to the top, then slipped a tad over the cushion, which was just enough to cause him to stumble and allow Courtney’s momentum to wheelstand into the top spot. Courtney slid past Leary entering turn three to complete the process of the pass, stumbled a bit himself on the turn four exit, yet still had enough get back to the stripe a half-car length ahead of Leary.

Courtney immediately clamped down, snaring the low line away from Leary and slid himself into the first turn before rapidly ascending his advantage to nine lengths ahead of Leary. Appearing to now have the race as well within hand as it’s been all night with three laps to go and with traffic now relatively cleared away, suddenly, Courtney found himself spun around backwards to a stop at the bottom of turn two, bringing an end to his bid for a first Kokomo Indiana Sprint Week victory after four other previous USAC Sprint scores.

With a three-lap shootout the only thing now standing between Leary and victory, plus the two winningest drivers with the series in Grant and Brady Bacon behind him, Leary took off at the drop of the green with might. Meanwhile, Bacon slid his way into the second spot by Grant in turn one for second.

Bacon, or anyone else for that matter, was no match for Leary in the final stanza with which he, the 2015 Kokomo track champion and now three-time USAC Sprint winner at Kokomo, cruised to a 1.254 second victory over Bacon, Grant, Robert Ballou and Chase Stockon.

Meanwhile, in Fatheadz Qualifying, Bacon embarked on another milestone in his USAC AMSOIL National Sprint Car career by recording his 36th fast qualifying time. That moved the two-time series champion past Rich Vogler on the list and into 6th all-time alongside Bryan Clauson.