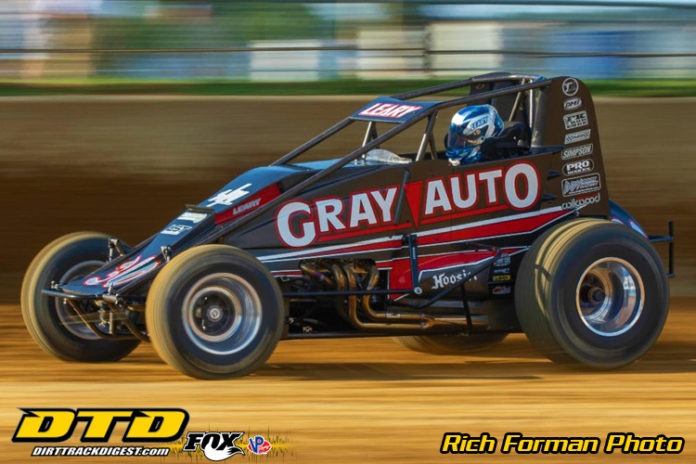 LAWRENCEBURG, IN – Entering 2020 NOS Energy Drink Indiana Sprint Week, it had been three years since a driver had gone “back-to-back” with consecutive victories in the annual tour of the Hoosier state.

The very same driver who achieved the aforementioned feat in 2017, C.J. Leary, has now become the most recent individual to accomplish the feat by leading all 30 laps of Sunday night’s third round of ISW at Lawrenceburg Speedway.

“Man, that was a workout,” Leary exclaimed after surpassing Thomas Meseraull and Tony Stewart in terms of USAC National Sprint Car wins with his 11th career triumph. “Lawrenceburg Speedway was elbows up tonight; definitely had the spurs on and took all I had. Typically, it’s a breeze in the park for me since I have so many laps here, but tonight, it was everything I had, and using all the experience I’ve put together the past 10 years here.”


That experience includes a sprint car track championship at the track during the 2013 season, plus the 2017 ISW score that launched him into a succession of ISW feature victories on two-straight nights that summer. Coming into Sunday, he’d been the only driver to have finished inside the top-five of the Lawrenceburg ISW event in each of the last four years, a streak he’s now run to five.

For Leary, track position was key on this night, as is the case for most anybody in as tight and competitive of a field that is in on display each night throughout the ISW tour. A solid qualifying performance Sunday night and a transfer spot through the heat netted Leary a starting spot on the outside of the front row.

“We somehow sandbagged just enough two nights in a row to get on the front row,” Leary said facetiously. “It’s what I felt like we needed to do to win these races. Winning these races is tough, but the 30 car was on a rail tonight.”

Leary proved that fact from the word go as he snagged the advantage topside to defeat pole sitter Seavey at the exit of turn two to lead the opening lap in a duel of the winners of the first two rounds of ISW this weekend.

At the completion of lap one, trouble ensued near the start/finish line when contact between 10th starting Kevin Thomas Jr. and 12th starting Tyler Courtney resulted in terminal frontend damage for Courtney, the 2018 Lawrenceburg ISW winner. Thomas, meanwhile, coasted to a stop atop the banking in turn one. He’d return to the fray and finish 12th.

More trouble ensued on the fourth lap when Jadon Rogers took a tumble in turn two to bring out the yellow flag in an incident which also collected USAC Triple Crown champion Jerry Coons Jr. Rogers was okay, while Coons rejoined the lineup for the restart, finishing 17th.

On the lap eight restart following the stoppage of Max Adams in turn one, the man on a mission was fourth-running Justin Grant who expunged Bacon for third with a turn three slider, then tried to execute the slide on Seavey for second on the 10th circuit in turn one.

As Grant was side-by-side with Seavey entering the first turn, Grant performed a quick skip and a hop up the banking, losing ground to Seavey and requiring him to regather and repursue at another juncture. However, with no warning in between turns three and four a half-lap later, Grant’s right rear wheel center broke, jettisoning his wheel, which careened off the outside wall before bouncing nearly the length of the front straightaway.

Grant managed to avoid wall contact, then returned to action at the tail of the field on the ensuing restart. The series point leader’s attempt at equaling J.J. Yeley’s 2003 record USAC National Sprint Car streak of 14 top-five finishes to begin a season came just short. Grant’s run of 13 consecutive concluded on this night, although, after a reinstallation of his right rear wheel, he came from the back of the pack to finish 8th.

Around the halfway mark, Leary continued rolling, expanding his lead to 1.5 sec. as the quest for second began to pick up steam. First, Windom slid by Seavey for the runner-up spot in turn one on the 15th lap. Seavey countered back under to retake the position in turn three. Windom filmed a second take one lap later, mimicking the same turn one maneuver he tried a lap later to secure second while Bacon faked high and ducked low to zip by Seavey for third on the bottom of three.

By that point, Leary had upped his command to over two seconds, yet it soon began dwindling as he picked his way through traffic. Despite setting a substantially quicker pace, Leary had to force the issue a bit on occasion in order to be on the offensive and be on the attack in terms of track position with Windom, Bacon and others clamping down in the latter stages.

“In lapped traffic, we were so much faster,” Leary recalled. “We came up on them quick, so you really just had to bomb them.”

Windom ably shrunk Leary’s interval to three-quarters of a second, and with seven to go, took his shot at Leary with a turn one slider. However, when Windom realized he wasn’t going to clear him, he pitched his car a little too far sideways and nearly spun, freely admitting he may have made the pass attempt just a half-lap too early.

As Windom gathered it back up, Leary recouped his advantage once again while Bacon closed for second in the meantime. As it turned out, that proved to be the final challenge presented to Leary as he raced to a 1.057 margin of victory over Windom, Bacon, Chase Stockon and Carson Short.

With his victory, Leary’s 12th overall win at the track equaled the previous summer’s Lawrenceburg ISW winner, Grant, as the winningest sprint car driver on the 3/8-mile iteration of the track, which began in 2008.

Bacon’s third-place finish allowed him to move to the point lead of Indiana Sprint Week by five markers with four races remaining over Grant with Chase Stockon third (-7), Leary fourth (-17) and Kyle Cummins (-23).

Grant’s Fatheadz Eyewear Fast Qualifying time earlier in the evening was his second during ISW after previously setting the standard in Friday’s opener at Gas City. It was also Grant’s 26th career USAC Sprint quick time, tying him with Jay Drake and C.J. Leary for 14th all-time.

**Chase Jones flipped during the semi. Jadon Rogers flipped on lap 4 of the feature.