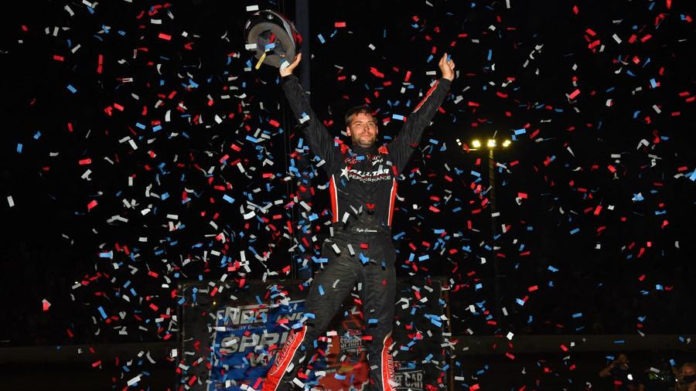 HAUBSTADT, IN – Sunday’s NOS Energy Drink Indiana Sprint Week finale at Tri-State Speedway turned out to be a homecoming of sorts for a pair of drivers who reside within a stone’s throw of the Haubstadt, Ind. track.

Kyle Cummins, about 15 minutes down the road in Princeton, continued his mastery of the quarter-mile dirt oval by winning Sunday’s 30-lap feature all while putting his name atop the leaderboard in terms of USAC AMSOIL National Sprint Car feature victories at Tri-State with five, alongside Daron Clayton and Kevin Thomas, Jr.

Meanwhile, the series’ Ironman in consecutive feature starts at 310, Chase Stockon, hails from Fort Branch, a literal seven-minute drive northbound on US 41 from the track. Of those 310 consecutive USAC AMSOIL National Sprint Car starts, perhaps few have generated the same type of personal satisfaction as did capturing his first Indiana Sprint Week title after a decade-straight of trying.


Cummins, who had been eliminated from ISW title contention following the heat races earlier in the evening, now simply had visions of a feature win dancing on his mind and was slotted to start the feature event from the pole position. Stockon, meanwhile, started 7th and Grant 11th.

The initial two attempts of taking the green flag resulted in a pair of stackups, the first of which saw a four-car turn one pile-up involving between Kent Schmidt, Jadon Rogers, Stevie Sussex and Critter Malone. The ensuing try saw Bacon, Malone and Aric Gentry stop on the front straightaway prior to hitting the start/finish line. Bacon, who trailed the ISW points by nine entering the feature, pulled off to the work area under yellow and briefly returned, only to drop to the infield prior to the race’s resumption to finish 23rd.

The third start was the charm, but this time Chris Windom, 5th in the ISW standings coming into the A, ripped around Cummins from his outside front row starting position to lead the opening lap. Cummins didn’t allow Windom to distance himself too far and roared to the lead past Windom on the second lap with a turn three slider. Fourth starting Shane Cottle mimicked the turn three maneuver past Windom a lap later for 2nd while Garrett Aitken slotted himself into 3rd.

By lap seven, Cummins had established a full-straightaway lead over Cottle, and by lap nine, was amidst a flurry of traffic at the tail end of the lead lap. However, a yellow for 6th running Tony DiMattia, making his first series start of 2020, rode the top of the turn four wall before coming to a rest on all fours back on the racing surface, which halted the action on the 10th lap.

Aitken, making the best run of his USAC Sprint Car career in just his sixth series start, threw his hat into contention with a turn one slide job for 2nd by Cottle on the 11th lap. A lap later, Aitken tagged the wall in turn two causing him to lose a couple spots while, behind him, four drivers on the fringes of the top-ten – Carson Short, Kevin Thomas Jr., C.J. Leary and Brandon Mattox – were stacked deep and stopped in turn one.

The timely yellow for Aitken put the Paris, Ill. driver back in second behind Cummins where he proceeded to slide by Cummins for the race lead in turn one. Quickly, Cummins cut back under Aitken at the exit of turn two to retain the lead, then slid himself through turn three to disavow any countermeasure from Aitken for the time being.

Following a plethora of precipitation that fell in recent days, Cummins hypothesized that the track had a much different feel than on this night than he is accustomed to. In response, Cummins found comfort up top that gained him a straightaway lead just prior to the yellow. Then came Aitken.

“I was being patient, not doing anything crazy, and all of a sudden here he comes, and I was like ‘oh,’ it’s time to step it up a little bit,” Cummins recalled. I just turned down and got him back. I could tell I was really going to have to step it up, and after that, I kind of moved my line around on the track a little bit. I moved a little bit more down to the bottom, then I got super tight, so I was grabbing shocks. Every yellow, I kept loosening it up, loosening it up. Even at the end I was still super tight.”

For virtually the entire second half of the race, Cummins’ progress was unimpeded at the front, and a watchful eye was turned toward the ISW title race. Point leader Grant, who had yet to finish outside the top-10 in his first 15 series starts to the season, was mired back in 13th. Simultaneously, Stockon was surging down the stretch, to 4th by Windom with three laps remaining and to 3rd two laps from the finish by Aitken, who began to run out fuel just prior to losing the second position to Cottle.

Following a one-race winless “streak” in sprint car competition at Tri-State back in June, Cummins has since gotten off the schneid by picking up back where he left off, winning an MSCS race there on Independence Day Weekend, then winning Sunday night’s USAC return despite having to search and find the winning combination throughout the evening aboard his Rock Steady Racing/Mid-America Safety Solutions – Greenwell Auto Body – Lucas Oil Center/Mach-1/Foxco Chevy.

“We didn’t get that last USAC win here because of some motor problems,” Cummins remembered. “We won the time after, although I didn’t feel great, and even the beginning of the night tonight, I didn’t feel like I normally feel here. We changed a couple things. Like in the beginning of the week, we’d kind of been trialing a little bit. Since COVID, we didn’t really get any testing, really.”

For Stockon, his raceday morning began at 6:30am watching his son, Parker, compete on a dirt bike in the 50 JR class of the Southern Indiana Grand Prix Series at Red Fox T-N-T in Tennyson, Ind. Young Parker finished second in the race that had a gate drop of 8:20am. Around 13 hours later that same day, Chase was back in his starring role behind the wheel, capturing his long-coveted Indiana Sprint Week driving championship in the KO Motorsports/Hutson John Deere – Ravens Manufacturing – AMSOIL/Velocity/Fisher Chevy.

“This is pretty sweet,” Stockon admitted. “It probably won’t sink in until tomorrow or Wednesday or something this week, but we’re going to bask in the glory of it right now.”
After nearly capturing victory at the Terre Haute Action Track in the previous Indiana Sprint Week race which ran to completion, Stockon and the KO Motorsports team, which he joined on a full-time basis just one month prior, bounced back with authority.

“It’s been a trying week for us,” Stockon said. “This is a lot of redemption for us. We were really good here tonight, just trying to be careful and trying to win a race at the same time. It’s all big picture for us. I got to thank my guys and everybody on the side of this car that made it all possible. I think it just shows how strong we are as a team. Nobody got down and everybody kept their chin up. We just powered forward.”

**Stan Beadles flipped during the semi.