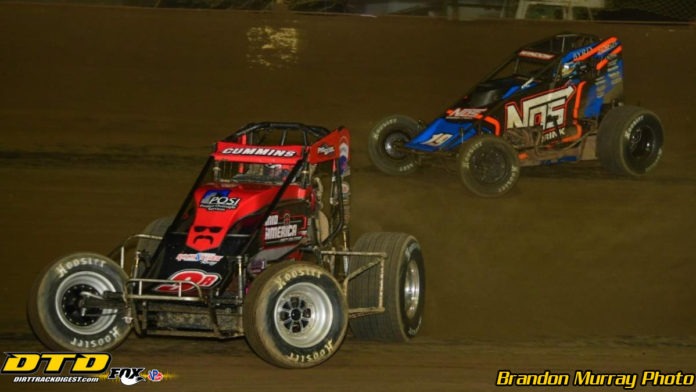 KOKOMO, IN – Entering Friday’s second night of Sprint Car Smackdown at Kokomo Speedway, no driver had ever swept victories on both prelim nights of the event.

And then came Kyle Cummins, who became the first to accomplish the feat after earlier capturing Thursday’s opener. In fact, dating back to early August of this year, Friday marked the Princeton, Indiana driver’s third consecutive USAC AMSOIL National Sprint Car victory, the first to “triple-up” in nearly four years with the series with Chris Windom being the most recent in late 2016.

“Oh definitely,” Cummins exclaimed when asked if this win had him even more excitable than Thursday’s score. “Last night, we started a little bit back and then we got the lead, then it was just running it as hard as you can. Even though that one was exciting, everybody was in this one until the end tonight.”

Always changing, always evolving, Cummins and team refused to rest on their laurels of success from the night before, and instead, tried a different approach to their setup for the 30-lapper which saw them occupy the outside of the front row. However, things weren’t exactly hunky-dory in the early stages with the approach, which ultimately worked.

However, a lack of rhythm marked the first several laps of the feature with a number of cautions stifling the action. On the opening lap, an incident between turns three and four stacked up four past Kokomo Sprint Car track champions running near the front of the field. Third-running Shane Cottle biked entering turn three, and when he landed, collected series point leader Justin Grant (4th), Dave Darland (9th) and C.J. Leary (11th). All eventually rejoined the field.

In the meantime, Cummins, who was the first driver to get dunked in the water tank for charity earlier in the day, made a splash on track as he rocketed around pole sitter Carson Short to occupy the lead on the opening lap. On lap four, Kevin Thomas Jr. was on the move as he slid under Short in turn three for 2nd while Fatheadz Eyewear Fast Qualifier Thomas Meseraull instantaneously went topside around Short for third.

A lap seven incident involved two perennial frontrunners who had already encountered their share of trouble early on. Grant flipped at the exit of turn four, which collected Ballou, who also made contact with the outside front straightaway wall after glancing off Grant’s flipping car. Both drivers were okay, but Grant’s incident did tighten up the series points race with the top-four of Grant, Chris Windom, Brady Bacon and Chase Stockon separated by just 34 points.

Under yellow, second running Kevin Thomas Jr. slowed to a stop on the front straightaway. After a push around the track, his race came to an early end as he was pushed back to the pits without re-firing, ultimately finishing 21st in the 24-car field.

On the lap eight restart, Cummins soon reestablished his half-straightaway lead (1.7 sec.), which he’d retain until just before the middle stages of the event while those behind him jockeyed for position from second on back.

Following a yellow on lap 14 for the slowing Anthony D’Alessio, running 19th at the time, the restart saw Meseraull, now 2nd, go on the attack, pouncing on Cummins for the lead with a turn three slider. As Meseraull slid past and up to the top at the exit of turn four, Cummins ducked back underneath to retake the lead at the stripe. There, Cummins withstood the challenge, then quickly reopened his half-straightaway lead once again.

A see-saw battle for 2nd between Meseraull and Windom developed with Windom gaining the upper hand and the runner-up position on lap 19 with a diamond maneuver off the top of three to the bottom of four to drive past Meseraull for 2nd, then put on the chase for Cummins and the race lead.

A slight stumble in turn two by Cummins on the 21st lap allowed Windom to close up the gap to Cummins to under a second and quickly shrinking. With five to go, Windom was now draped over Cummins, pulling ahead of Cummins on the back straightaway by a car length momentarily as the two sped into the third turn, Cummins occupying the low line and Windom working up top as the pair began to encounter traffic.

“When the lapped cars got there, I kind of moved up a little bit and that made me better in three and four for sure,” Cummins explained. “I was better through three and four in the middle, but I went to the top in one and two and just kind of floated it in to make sure everything was alright. I had just gotten into the cushion and I saw Chris (Windom) there, then I knew I had to hustle a little bit harder.”

Coming to the line with four to go, however, Cummins drifted up off turn four in front of Windom while working around the car of Dustin Smith at the tail end of the lead lap. That stifled Windom’s drive of momentum at the top and vice versa’d each driver’s role with Cummins now high and Windom low. Windom edged ahead off two but was slightly boxed in behind Smith while Cummins established a line right through the middle to lock down the lead as Windom remained just two car lengths back.

The throng of traffic allowed Cummins to discover something on the surface of the quarter-mile dirt oval, much to his liking, while also elevating his game in crunch time.

“The lapped car took me all the way up to the cushion in three and four,” Cummins remembered. “I ran around there, and it was even better than it was in the middle. Even in one, I got a little sideways; I just didn’t want to get in there and hop the front end. I knew as long as I did that, I could keep my nose down and at least beat them through three and four. Once I saw a nose (from Windom) right there at the end, I picked it up those last couple laps. I could’ve really went pretty hard and I could’ve probably picked it up a little bit if I had seen him a little bit earlier.”

Windom fired his shots at Cummins in the final laps, but could never quite get enough of a run to reel in Cummins for the taking, Instead, it was Cummins taking it all for his own, closing out his third career Kokomo USAC AMSOIL National Sprint Car victory over Windom, Tyler Courtney, Buddy Kofoid and Brady Bacon.

Cummins is at the head of the class in terms of points after the first two nights of Smackdown IX, and is one of eight drivers locked into Saturday night’s 40-lap feature event and also the B & W Auto Mart King of the Hill along with Brady Bacon, Buddy Kofoid, Thomas Meseraull, Tyler Courtney, Chase Stockon, Chris Windom and C.J. Leary.

“I’m glad it worked out how it did,” Cummins said. “It’s pretty exciting driving under the checkered flag there to get that one and winning too. But I’m here to win three, and to really put a staple on it.”

**Brian VanMeveren flipped during the semi. Justin Grant flipped on lap 7 of the feature.