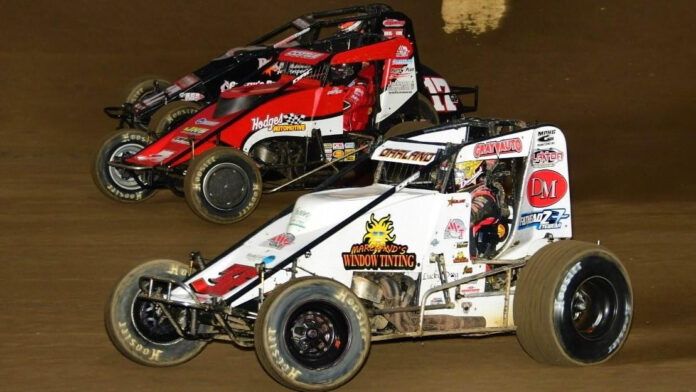 SPEEDWAY, IN – The schedule has been unveiled for USAC’s 2021 AMSOIL National Sprint Car season with 50 events set to be staged from coast-to-coast.

The 12th edition of Winter Dirt Games marks the beginning of the campaign with three consecutive nights in the Sunshine State of Florida at Ocala’s Bubba Raceway Park on Feb. 11-12-13, with an increase in purse paying $10,000 to the final night’s feature winner.

It’s just one of several events on the series’ schedule which will feature increased purses, including the $20,000-to-win Corn Belt Nationals at Iowa’s Knoxville Raceway on July 10 and the $12,000-to-win Haubstadt Hustler at Indiana’s Tri-State Speedway on Sept. 18, with much more to be announced at a later date.

The schedule is also highlighted by not just one, but two trips to the east in both April and June. April’s slate includes a four-race set in Pennsylvania at Grandview Speedway (Bechtelsville) on April 22; Big Diamond Speedway (Pottsville) on April 23; BAPS Motor Speedway (York Haven) on April 24; and Path Valley Speedway Park (Spring Run) on April 25.

The series features a mix of both first-time venues and returns to tracks that have not been frequented by the series in quite some time.

Three tracks on this year’s USAC AMSOIL National Sprint Car schedule will host first-time events: the aforementioned Path Valley and Bloomsburg dates as well as Circle City Raceway on Sept. 17, the first series event held in Indianapolis since 1984 at the Indiana State Fairgrounds.

Meanwhile, three more dirt ovals will welcome back the USAC AMSOIL National Sprint Cars for the first time in a number of years. Selinsgrove last hosted the series a half-century ago in 1971 while Big Diamond’s last appearance came nearly a decade ago in 2012. Furthermore, while the series has made two previous trips to Bridgeport, it was under the former 3/8-mile, semi-banked configuration. Since the last visit in 2019, the track has been completely revamped into a high-banked 4/10-mile.

Indiana’s Paragon Speedway, which was last shown on the USAC National Sprint Car schedule in 1998, will be part of a busy month of April on the 18th, a month which will also include stops at the traditional Indiana dirt tracks of Lawrenceburg Speedway on April 3, Bloomington Speedway on April 16 and Tri-State Speedway for the Spring Showdown on April 17.

Staples that have been traditional events over the last several years make up the bulk of the 2021 landscape. #LetsRaceTwo is on for two nights at Rossburg, Ohio’s Eldora Speedway on May 7-8, with a double stop at Lakeside Speedway in Kansas City, Kan. greeting the series on May 21-22 and the 51st running of the Tony Hulman Classic is on tap May 26 at the Terre Haute (Ind.) Action Track.

The hot summer months heat up right out of the gate to open up July with three races in three nights leading up to Independence Day, starting on July 1 at Indiana’s Plymouth Speedway, followed by two nights of the Bill Gardner Sprintacular on July 2-3 at Lincoln Park Speedway in Putnamville, Ind.

One of the most highly anticipated events on the calendar is the busy stretch of seven races in nine nights they call Indiana Sprint Week, which will feature a familiar look, leading off the first weekend at Gas City I-69 Speedway on July 23, with Kokomo Speedway on July 24 and Lawrenceburg Speedway on July 25 rounding out the first wave of ISW. After two days away from the racetrack, teams and drivers get back on the horse with Terre Haute’s Don Smith Classic on July 28, Lincoln Park on July 29, Bloomington’s Sheldon Kinser Memorial on July 30 and Tri-State on July 31.

Sprint Car Smackdown’s grand 10th annual running comes to Kokomo for three-straight nights on Aug. 26-27-28, the lone August events for the series. On Sept. 23, it’s back to Gas City for the second time of 2021 and the third annual James Dean Classic.

Eldora’s 4-Crown Nationals enters its 39th running in 2021 on Sept. 25, the only occasion during the year in which all three of USAC’s national divisions: Silver Crown, AMSOIL National Sprint Cars and NOS Energy Drink National Midgets, will be in competition on the same night at the same track.

The Midwest portion of the schedule closes out at the beginning of October with a weekend doubler at Terre Haute for the Jim Hurtubise Classic on Oct. 1 and to Lawrenceburg for the Fall Nationals on Oct. 2.

A number of yet-to-be announced events are also in staging. Events with dates but no location as of yet include a stop on July 9 as well as three consecutive nights on Sept. 9-10-11.

Events with an undetermined date at press time 2021 include the 25th Oval Nationals at California’s Perris Auto Speedway and the 54th Western World Championships at Arizona Speedway in San Tan Valley.