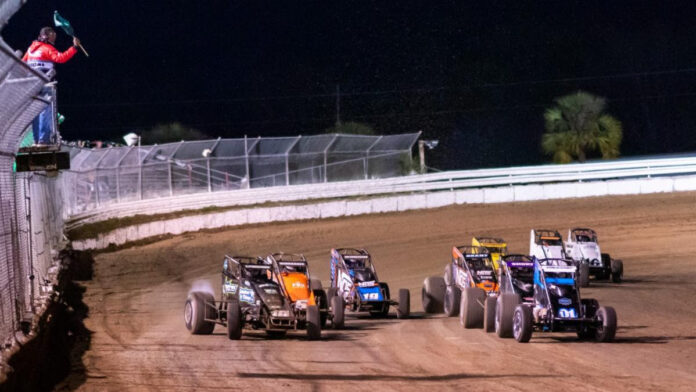 Over the first two nights of USAC Sprint Car events at the 3/8-mile D-shaped track on Feb. 11-12, total points will be calculated, which will “lock-in” the top-five in total combined points into Saturday night’s feature event.

The winning drivers of each qualifying race will transfer into a dash with the top-5 locked in drivers. Starting positions for the dash will be drawn for with the qualifying race winners selecting first when they stop for their winner’s interview, followed by the lock-ins. Positions 1 and 2 on the front row for the feature will only be available in the draw to the five drivers previously locked in. The finish of the 8-car, 4-lap dash will determine the first 4 rows of the feature.


The top-5 finishers from the 12-lap semi-feature will transfer into the night’s feature, filling the final five positions in the feature starting lineup.

If Thursday’s or Friday’s events are canceled, Saturday night’s event will retain the standard format.

The second half of WDG brings on the beginning of the USAC AMSOIL National Sprint Car season Feb. 11-12-13 at Bubba Raceway Park. A practice night on Feb. 10 for the series precedes three consecutive full nights of racing.

Race day tickets will be available at the gate on race day. No pre-order is necessary.
For practice nights, on track action runs from 6-9pm ET. Grandstand admission is free. Pit passes are $20 apiece.