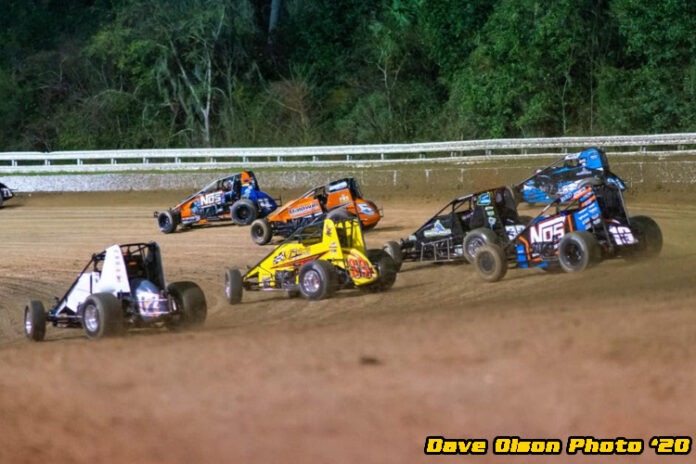 OCALA, FL – Eight past Winter Dirt Games feature winners are set for the battle to commence when the USAC AMSOIL National Sprint Car season launches Feb. 11-12-13 at Bubba Raceway Park in Ocala, Fla. A dedicated practice night for the Sprint Cars is scheduled for Wednesday night, Feb. 10 from 6-9 pm ET at the 3/8-mile D-shaped dirt track.

Forty-four cars are projected to compete in the three-night event, representing 14 different states. The record for the most cars to participate in a single Winter Dirt Games USAC AMSOIL National Sprint event is 34 on Feb. 20, 2014.

Defending series champion Brady Bacon (Broken Arrow, Okla.) leads the charge for this year’s crop after sweeping both nights of Winter Dirt Games at Ocala in 2020 to up his total to four all-time Winter Dirt Games victories after previous triumphs in 2014 and 2015, all for Dynamics, Inc.

Robert Ballou (Rocklin, Calif.) is one of only two drivers in this year’s field to have competed in the very first Winter Dirt Games feature in 2010, along with 1999 series champ, Dave Darland (Lincoln, Ind.). Ballou has nabbed a pair of wins at Ocala, first in his USAC championship season of 2015 and again in 2016, while also notching one at East Bay in 2015. Darland, who has joined the Baldwin/Fox/Curb-Agajanian team for Florida this month, won in 2015 at Ocala.

Prior to Bacon, the most recent driver to score consecutive Winter Dirt Games USAC Sprint features was Tyler Courtney (Indianapolis, Ind.). Courtney won the last two of 2018 at Ocala for the, at the time, new Clauson-Marshall-Newman Racing USAC Sprint team, then proceeded to reel off two-straight with the USAC NOS Energy Drink National Midgets at the same track in 2019.

Along with Courtney, Chris Windom (Canton, Ill.) is the only other individual who has won in both USAC National Sprint Car and National Midget competition during Winter Dirt Games at Ocala. Windom, the 2017 USAC Sprint king, won the Sprint opener there in 2019 and followed suit with the Midgets in the 2020 WDG finale. His Hayward Motorsports Sprint team won with the Midget at Ocala in 2020, driven by Tanner Thorson.

Justin Grant (Ione, Calif.), the 2020 USAC Silver Crown champion, captured the 2017 USAC Sprint opener at Ocala, then celebrated victory once again there on the second night in 2019, this time for TOPP Motorsports.

C.J. Leary (Greenfield, Ind.), one of eight USAC National champions in this year’s Ocala’s USAC Sprint field, led the way to victory in the 2019 WDG closer. He’s joined the team owned by Bill Michael for the 2021 season, which won a record 39 USAC Southwest Sprint Car features and four consecutive series championships between 2013-16.

Chase Stockon (Fort Branch, Ind) won the 2018 Ocala opener in his own car, which he stepped out of mid-2020 to race full-time for KO Motorsports. The 2019 Jason Leffler Memorial Award winner enters his 10th straight season as a full-time USAC National Sprint Car driver and carries a record 321 consecutive start streak.

A bevy of veterans are hungry for a first career Winter Dirt Games victory with the USAC National Sprint Cars. One driver, Tanner Thorson (Minden, Nev.) has already tasted victory at Ocala with USAC, but it came in the Midgets, in the WDG opener in 2020. Thorson also owns the track record in a Midget at Ocala and his Reinbold-Underwood Motorsports team has been victorious there with Leary in 2019.

Same goes for Kevin Thomas Jr. (Cullman, Ala.) who swept both POWRi Midget features at Ocala in 2018. He’s come oh-so-close in the Sprint Cars there on multiple occasions, finishing 2nd in both 2018 and 2019. He does own one Winter Dirt Games USAC Sprint win, however, with that coming at East Bay in 2015.

Kyle Cummins (Princeton, Ind.) has been a Rock Steady performer at Ocala, finishing 2nd in both 2016 and 2020. Timmy Buckwalter (Douglassville, Pa.) finished a best of 7th in 2019, the same year in which he also set his first career fast qualifying time with the series.

Half the field is a first-time Winter Dirt Games participant, including USAC AMSOIL National Sprint Car Rookie of the Year contenders Paul Nienhiser (Chapin, Ill.) and Carson Garrett (Littleton, Colo.), both of whom are teammates on the KO Motorsports team.

Race day tickets will be available at the gate on race day. No pre-order is necessary.
For practice nights, on track action runs from 6-9pm ET. Grandstand admission is free. Pit passes are $20 apiece.