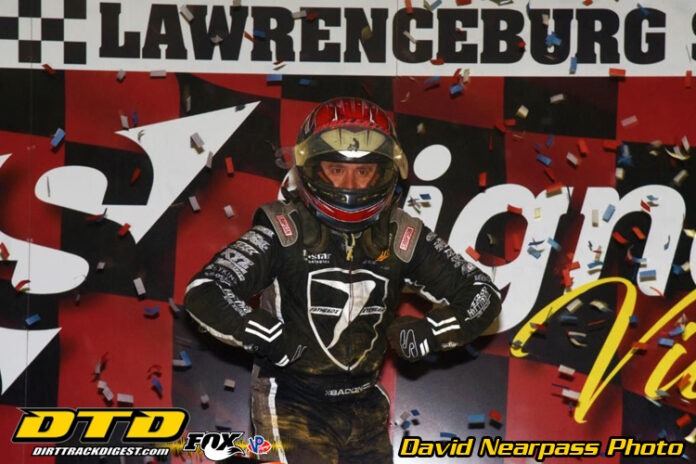 LAWRENCEBURG, IN – Lawrenceburg Speedway is the focal point in which Brady Bacon and Dynamics, Inc./Hoffman Auto Racing reached yet another zenith in their successful racing relationship.

On Saturday night, the team, based in nearby Milford, Ohio, received its rewards for the previous season’s title – which concluded with a win at Lawrenceburg – during a stirring pre-race ceremony, and saw Rob Hoffman being presented the Richard Hoffman USAC National Sprint Car Entrant Championship trophy, so named in his father’s memory.

Akin to so many prior occasions throughout much of the past decade, when the evening was all said and done, the rewards were aplenty, and the gifts, well, they kept on giving.

Exactly six months to the day of Bacon and team reigning victorious at The Burg in their most recent foray to the southeastern Indiana venue, the team reigned victorious for the 28th time together with the series, and for the second consecutive time at the 3/8-mile dirt oval.

The third-winningest combination in the history of USAC AMSOIL National Sprint Car racing carried its mojo into its return trip to Lawrenceburg, as the Broken Arrow, Okla. native raced from the sixth starting position to the lead in just six short laps, carrying on to a complete annihilation of the 24-car field by a 2.924 sec. margin at the end of the 30-lap feature.

It was a seemingly comfortable win for the now 36-time USAC National Sprint Car driver, who surpassed Rich Vogler and Jon Stanbrough for sole possession of 10th all-time. However, Bacon’s comfort cruise was more like a four lane highway in the thick of rush hour traffic for the majority of the contest.

“You never know,” Bacon remarked, referring to how much of a lead a driver possesses in a sprint car race at any given time. “Traffic can really slow you down, and I got to where I wasn’t in the right spot on the track, and I wasn’t really gaining on the lapped cars. So, I assumed they were gaining on me. We had a good lead, but you never really know. But we passed two of the best cars out there, and if you can do that, you’re rolling around pretty good.”

Outside front row starter C.J. Leary grabbed the lead on the initial start but was quickly tracked down by Bacon who ascended to third by the end of lap one after riding the outside line in the wake of Leary with Grant in second.

Following Chase Stockon’s bike and bounce in turn two that brought out an early yellow, Bacon scooted by Grant for second on the restart and, in short order, was threatening Leary’s sovereignty. On the sixth circuit, Bacon stuck a nose underneath Leary in turn three, and was able to get the drive off turn four to secure the top spot.

“I kind of worked him over and just had a good enough car to get by him as quickly as I could just in case it might turn into one lane; it didn’t really, but it could’ve,” Bacon explained. “So, I tried to get to the lead as quickly as I could, and I tried to be as aggressive as I thought I could afford to be in lapped traffic.”

In relatively no time flat – two laps – Bacon let loose to construct a full-straightaway lead over Leary. High, low, slip, slide, dip and dive, Bacon found himself in a personal game of Tetris amongst lapped traffic as he sought to shoot the gap, fill the gap, and move onto the next level in quick succession.

A continuous line of combatants that forced him to move his line high, middle and low, wherever he needed to go, wasn’t enough to slow Bacon down at any rate as he maintained and annexed his interval over Leary down the stretch while, in the process, putting all but the top-10 finishers a lap down at the finish.

Bacon’s win elevated him to the top of the point standings in this still very young season, but a good start is nothing to take for granted, and Bacon is no exception.

“I felt good,” Bacon said. “But once you get to the middle of the year, you can really feel if you’re really good or not. This place has always been kind of hit or miss for us. We always run decent, but the good guys always seem to find the front here. There could be a big difference between a first place car and a fourth place car here. I think we had one of the best cars at (a non-sanctioned event) at Brownstown and one of the best cars in Florida, so we’re pretty happy with how the year has started.”

Bacon next turns his attention to the April 9-10 Werco Manufacturing T-Town Midget Showdown presented by the Rayce Rudeen Foundation at Port City Raceway in Tulsa, Oklahoma where he’ll serve not as a driver, but, instead, in the role of race promoter.

Simultaneously performing the balancing act of successful driver and successful promoter from one weekend to the next is a relatively uncommon occurrence, but he’s bound and determined to make it work.

“We had an extra-long offseason, so we felt pretty prepared. My wife does a lot of the advertising work for the race. We’ll really be hitting it hard this week, get that one behind us, and then we have another one right after that,” Bacon said, alluding to his second promoting endeavor, the May 9 USAC Silver Crown race at Winchester (Ind.) Speedway.