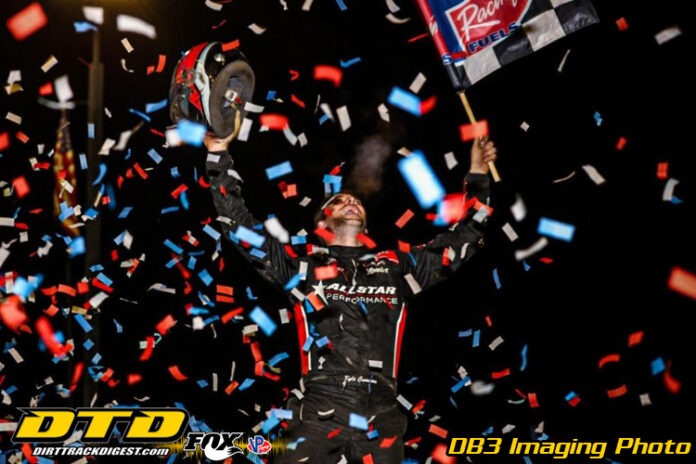 HAUBSTADT, Indiana – At Tri-State Speedway, Kyle Cummins has long since honed his knack for taking the most extraordinary moments and making them seem almost routine.

Not to be taken for granted, but it’s almost what many have come to expect from the track’s most dominant wheelman over the last decade at the southern Indiana quarter-mile dirt oval.

Sure, we’ve become so accustomed to the plethora of highlight reel performances by the Princeton, Indiana native, but possibly none have been as impressive as Saturday night’s drive to victory from the 11th starting position in which he ran down Jadon Rogers just four laps from the finish to score his first career Spring Showdown triumph, co-sanctioned by USAC and MSCS.

Cummins had won practically every named race at Tri-State, but the first eight editions of the Spring Showdown had eluded him thus far. His sixth career USAC victory at Tri-State made him the winningest USAC Sprint Car driver at Tri-State, breaking a three-way tie he had held with Kevin Thomas Jr. and Daron Clayton at five.

Six of Cummins’ 10 career USAC AMSOIL National Sprint Car victories have come at the Haubstadt, Ind. track, and hitting the double-digit mark in terms of wins with the series also pushed him past Mario Andretti, Kyle Cummins, Pat O’Connor, Hunter Schuerenberg and Robbie Stanley on the all-time series win list.

Cummins’ journey entailed continuous alterations, trials and errors and improvements on the car throughout the course of the evening following qualifying, the heat race, and even prompted a well-placed phone call to his father, Mark, a sprint car hero himself at Tri-State during the decades of the 1980s and 1990s.

Pole sitter Chase Stockon came out with a prominent bit of mental fire after his all-time record streak of 324 consecutive USAC National Sprint Car feature starts was snapped the previous night at Bloomington when the Fort Branch, Ind. pilot missed the transfer.

During an all-nighter that lasted until 4am into the wee hours of Saturday morning, Stockon and the KO Motorsports team pieced together last year’s successful car and headed to Tri-State where the team was triumphant in its most recent USAC start last September, and to jump off the self-described struggle bus that had plagued the team since the beginning of the new season.

Stockon led the opening five laps while team manager and on-track teammate Kent Schmidt rallied to second and began to challenge him for the race lead. Meanwhile, fifth starting Jadon Rogers hustled his way up into the thick of the battle and, ultimately, worked his way underneath Stockon to gain the top spot on lap six.

Rogers, the 2020 USAC National Sprint Car Rookie of the Year, finished as the runner-up to Stockon last Fall at Tri-State for his best career result to that point. Additionally, Rogers was wheeling a car for the very same Randy Edwards owned team that was victorious in the most recent Spring Showdown in 2020 with first-time winner Stephen Schnapf, a feat Rogers was hoping to repeat on this night.

By mid-race, Rogers had opened up a 4.5 second lead as he aggressively attacked his way through lapped traffic to provide himself a healthy advantage over Stockon and the steadily emerging Cummins who had suddenly entered the top-five. Despite adaptively acclimating himself to his current situation amid the thick of traffic, in theory, the successive pair of cautions just after midway effectively provided Cummins an opportunity to catch up, settle in, regroup, and gain more positions without the hindrance of traffic thrust into his sight.

On the 21st lap, Cummins paced his way by Stockon for the second position, and just moments later, a yellow fell for the spinning duo of Paul Nienhiser (16th) and Chet Williams (18th) in between turns one and two. That provided Rogers another clear track out in front, thus making traffic practically an afterthought at that point. However, it did also pose Cummins an unobstructed shot at Rogers, mono y mono, just those two, down to the stripe for the win.

Rogers couldn’t afford to make a mistake on the ensuing restart with nine laps remaining, as he rode the high line and Cummins displayed the entirety of his car just a smidge to the left of Rogers field of vision. Rogers was pretty much flawless over the next five laps as Cummins wasn’t able to make much headway on the bottom.

With four laps remaining, the car of Carson Short slowed dramatically in front of the leaders on the front straightaway to bring out the yellow flag, setting up one final shot and one final opportunity for Cummins to give it a go.

“When I got to second, I felt pretty good on the bottom, and then Jadon stepped it up another gear, and went around the top and I wasn’t going to catch him,” Cummins revealed. “As soon as the yellow happened, I moved the shocks a little bit and I just knew I had to blaze her in there, and just keep my momentum up.”

Cummins didn’t waste a second of his time blazing it in there on the lap 27 restart, sliding up in front of Rogers in turn one soon after the drop of the green. Rogers quickly countered and tossed his machine to the bottom of turn three, sliding by Cummins in the process, but leaving room for Cummins to race back by underneath to reassume the position and never relent over the final three laps, ultimately stretching his lead out to 1.323 seconds at the finish line.

“That was probably one of my most exciting wins down here in a long time because I had to battle, I had to change my line, run the top, run the bottom, I actually had to pull some tear-offs tonight. All in all, just an unbelievable night,” an ecstatic Cummins stated in victory lane.

Justin Grant took 4th while Brady Bacon rounded out the top-five with a 5th. Bacon, the series point leader, remains the only driver to finish inside the top-five in all five of his USAC AMSOIL National Sprint Car starts thus far this season.

During Fatheadz Eyewear Qualifying, Kevin Thomas Jr. moved into the top-10 all-time in career fast qualifying times with the USAC National Sprint Cars. His 30th fast time moved him into a tie with Pancho Carter for 10th all-time.