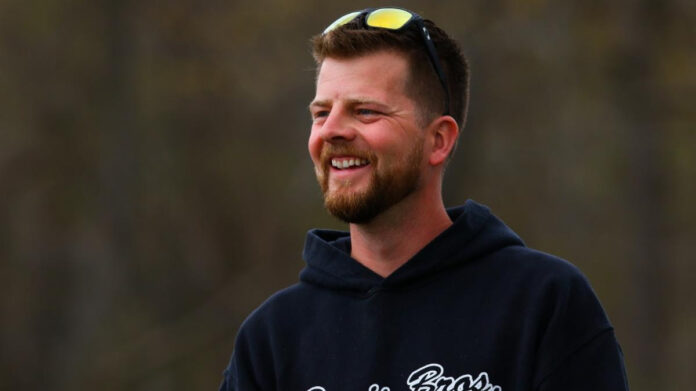 SPEEDWAY, IN – They say the only constant in life is change.

One of the constants throughout the past several years has been the presence of Chase Stockon in the starting lineup for a USAC AMSOIL National Sprint Car feature.

Another common refrain is that all good things must come to an end at one point or another in life, in competition, or otherwise.

That’s what made the posted feature lineup on the date of April 16, 2021, at Indiana’s Bloomington Speedway seem a bit startling. For the first time in nearly a decade, the name “Chase Stockon” was nowhere to be found.

One of the finest achievements of longevity, perseverance and pure grit in the history of the series – an all-time record of 324 consecutive feature starts since the beginning of the 2012 series season – was over.

As it turned out, Stockon’s Cal Ripken Jr.-like streak had concluded in a somewhat similarly unexpected manner as the Baltimore Orioles infielder’s consecutive Major League Baseball start streak of 2,632. Ripken’s run ended when he opted out of the lineup on his own terms.

For Stockon, it was, and it wasn’t, in terms of opting out on his own terms. A rugged start to the 2021 season had seen nary a finish inside the top-ten nor a competitive run in his first four outings.

A starting spot in the feature at Lawrenceburg on April 3 was salvaged by the use of a provisional, which afforded Stockon a position at the tail of the lineup preceding the fateful Bloomington round on April 16 where a 10th place finish in the semi-feature resulted in another missed transfer spot. All expectations were inevitably that Stockon and the KO Motorsports team would utilize one of the provisionals they had at their disposal.

Then word came from the pit area that the team had rejected the use of a provisional, thus ending the ultimate “Iron Man” run.

“We knew it was inevitable that one of these days, this streak was going to come to an end, whether it was because I was ready to quit racing full-time or it was because of circumstances, kind of like what happened at Bloomington,” Stockon said.

Shockwaves were sent throughout the pit area, the crowd and the press box when the closure of one of the most iconic runs in the history of USAC became a reality, but the team had an ulterior plan.

Over the offseason, the 2020 Indiana Sprint Week championship driver and team combo built a new car and intended to try out a few new ideas on it. Stockon admitted he didn’t really want to change too much because, after all, they were pretty good down the stretch in 2020, winning twice and being in contention for the series title entering the season finale after pairing up full-time in early July of that year.

However, things simply haven’t worked out with the new car to start the season. With a best finish of 11th through four events, the results weren’t trending in the intended direction.

When push came to shove at Bloomington, the bold decision was made to forgo the use of a provisional. Instead, the team all agreed, on the spot, that they’d much rather right the ship now rather than wait any longer, sacrificing their goals in the short-term for what they want to accomplish in the long run with the season still young, but still with a tad bit of reservation.

“There’s always a little bit of doubt and that we should keep that streak alive,” Stockon stated. “We’re obviously still having fun doing what we’re doing, but it was somewhat miserable at the same time not running how we expected to be running. It isn’t very good on the guys or the driver in that situation, and we thought it would be best to go to work and get competitive again.”

That pivotal moment came at the beginning of a stretch of seven scheduled races in 10 days for the team. Even though they knew they had an all-nighter awaiting them at the team’s Owensville, Ind. shop, between two races, that ultimately lasted until 4am, they had a feeling they needed to make changes now or endure a long and taxing next week-and-a-half on the road.

“It came to that point at Bloomington where we were struggling with a lot of issues, and we decided to throw all our eggs in one basket and regroup, and that’s what we did,” Stockon explained. (Crew member) D.J. Ott, (team manager) Kent Schmidt and I, we all decided that we needed to do something different. We couldn’t just continue to do the same thing and expect different results. We came back down to the shop that same night, stripped the car down, and put last year’s car together. I guess you could say that we put the old car together and expected the old results, and that’s we got.”

Stockon and KO’s subsequent evening at Tri-State Speedway in Haubstadt, Ind. on April 17 was much more to their liking, resulting in a season-best third-place finish in the feature, bringing about a boost of confidence and a newfound outlook on the short-term and the long-term heading into four races in four nights this weekend, April 22-25, in Pennsylvania.

“After running the way we did at Haubstadt, there’s a lot of guys who’d say that that’s to be expected because that’s our home track,” Stockon said. “But on the same token, if you’re off down there, you’re a second off the pace or more. Running that well and being in contention late in the race, and just being in the conversation, that boosted everyone’s confidence and put us in a good spot going forward.”

Stockon, the 14-time USAC National Sprint Car feature winner, has a little more pep in his step after Haubstadt now that he officially has a feature starting streak of one at this point. However, the Fort Branch, Ind. driver doesn’t mind at this juncture. It’s more of a weight off his shoulder without having the record in the back of his thoughts, a record of which he had long since passed with his 285th straight series start at the Terre Haute (Ind.) Action Track in 2019, surpassing five-time series champ Levi Jones in that regard.

“We had a few people mad at us for making that decision,” Stockon recalled. “But it’s a relief not having to worry about it or hearing about it, and just being able to go to the racetrack and be Chase Stockon again, not the “Iron Man” or “record holder.” But we’ve also had people comment and say, ‘well, I guess it’s time to start the streak over again.’ The last 10 years have been a lot of fun, but it’s also been a grind. If it ever gets to the point where somebody beats that record, kudos to them. All of us – the guys who’ve been with me throughout the years and the guys here at KO Motorsports – knows what it takes to achieve that.”

With the streak in the rearview, Stockon looks to get back into top form as a consistent race winning contender and championship contender, but he’s not hesitant to take one last look over his shoulder to see what the streak has meant to him and those around him who’ve helped him along the way.

“I never thought we’d be able to do something quite that drastic,” Stockon admitted. “I’ve been fortunate to have a car prepared for the racetrack with funding, and it’s one of the things I had while running my own car most of the last 10 years with a lot of help from Tom Burkey and Superior Tank & Trailer. My wife was there for the whole deal, and so was D.J. It’s really a testament to their dedication and what we’ve all been able to accomplish together. That’s the cool part about it. Reflecting back on it, that’s the thing that’s most humbling.”