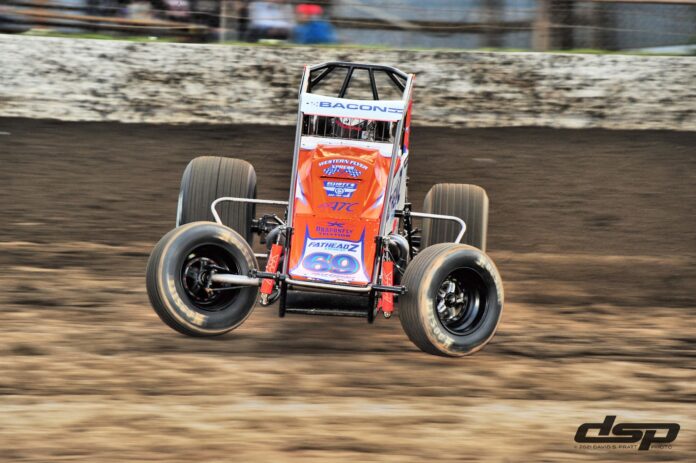 BECHTELSVILLE, PA – In this era, few drivers have demonstrated their domination of a single racetrack as well as Brady Bacon has with Bechtelsville, Pennsylvania’s Grandview Speedway over his past four visits to the 1/3-mile dirt oval.

On a chilly Thursday night in the lid lifter for Keystone Invasion, the three-time USAC AMSOIL National Sprint Car champion stoked the fires once again on his hot streak, winning his fourth-straight series race at the track after previous “dubs” in 2017, 2018 and 2019, an extraordinary feat that has only been accomplished by those at the top of the game, a group in which the Broken Arrow, Oklahoma driver certainly belongs.

Bacon’s fourth consecutive triumph at a single track in USAC National Sprint Car competition places him in an exclusive group which consists of only nine other individuals throughout the history of the division. Two have won five-in-a-row at one venue: Jim Hurtubise – Terre Haute Action Track (1960-1962) and Steve Chassey – Winchester Speedway (1979-1979).

Bacon tracked down race leader Kevin Thomas Jr. on the 22nd lap of Thursday’s 40-lap feature. Bacon then withstood a late resurgence by Thomas to win his second series feature of the 2021 season.

The main event was the latest in a series of captivating Bacon/Thomas duels of late, which showed shades of the 2018 Grandview round in which Bacon led, then lost the lead late to Thomas, only to regain it back at the end. And it was just one week ago at Bloomington where Thomas led the majority, gave up the lead to Bacon, then regained it with three laps left en route to the score.

“This has turned into one of our better tracks,” Bacon said, an understatement to be sure. “I look forward to coming here and I’m really happy to get another win here.”

Bacon started third while outside front row starter Thomas scooted away from Bacon as well as pole sitter Brandon Mattox. Just two laps in, Thomas was up a half-straightaway, and by lap four, his advantage was a full-straightaway as he laid an early hurtin’ on the 23-car field.

On the eighth lap, Bacon was able to clear Mattox for second with a swift move under the 2020 USAC National Most Improved driver exiting the fourth corner. By then, however, Thomas was barely visible within Bacon’s scope, 4.8 seconds ahead.

Trouble for others spelled the closure of Thomas’ substantial early-race advantage when sixth-running Chris Windom got completely sideways between turns one and two. While Windom was in the process of getting out of shape, seventh running Thorson, with nowhere to go, tapped the back of Windom’s rear bumper, sending Windom around and to a stop.

Windom restarted at the tail and raced his way back to 10th, continuing his string of 21 consecutive top-ten finishes with the series dating back to July of 2020.

Bacon’s newfound track position paid major dividends as he draped his car all over that of Thomas for the next several circuits and immersed himself entirely in lapped traffic. Then, on lap 22, Bacon diamonded turns three and four, and swooped between the inside wall and Thomas off turn four to escape with the lead. Then, Bacon succinctly drove from the bottom of four straight to the top in turn one across the nose of Thomas to steal the line away and drive off to a one second lead during the ensuing laps.

“I knew if I could get to second, and that there’d probably be a yellow, I didn’t have to worry about tracking him down,” Bacon described of his pursuit of Thomas. “I just kind of worked him over in lapped traffic and I figured that, once we’re on an open track, I could keep enough of a good pace to not let him get underneath me or slide me. The bottom just wasn’t quite there like it sometimes is. I knew if I just made some good laps and didn’t mess up, I’d be okay.”

Bacon threaded his way through the back of the pack, decisively splitting between Joey Biasi and Ricky Lewis in turn one, while leaving Thomas stifled behind them and allowing Bacon to check out momentarily until a stoppage moments later on lap 29 when three-time USAC East Coast Sprint Car champion, and 16th running, Steven Drevicki, emerged unhurt following a flip between turns three and four.

A clear track for Bacon up front didn’t necessarily foreshadow clear sailing as Thomas remained within earshot throughout the final 11 lap run. Thomas remained three to four car lengths back while Bacon continued maintained a steady pace up front. Traffic was relatively trouble free for Bacon as he navigated the high line while the lappers stayed the course and laid low, creating a clean path to a 0.814 sec. margin of victory.

Thomas, the lone multi-time winner on the USAC National Sprint Car trail prior to Bacon on Thursday night, finished in the runner-up spot in his KT Motorsports/Dr. Pepper – McDonald’s – KT Construction Services/DRC/Speedway Chevy. However, after leading a race-high 21 laps, Thomas felt as if this night very easily could’ve win number three.

“I felt like I gave that one away,” Thomas stated. “We had a good car; Brady and I were equal there by the end. To that point, not making the right moves on lapped cars was a big mistake on my end. It’s frustrating, and I just don’t really have words for it. But it’s good when your pissed off about second. I just have to do a little better on my end. They gave me a winning racecar and I didn’t do it.”

Ballou connected the dots to earn his best finish of the 2021 season, finishing third in a KSE Racing Products Hard Charger performance after advancing 10 positions from his 13th starting spot. The final spot on the podium equaled his best career Grandview USAC finish of 3rd back in 2011. It was the series-leading third time in six races that Ballou has been rewarded for his hard charging ways in his Ballou Motorsports/Suburban Subaru – Berks Western Telecom – Rossie Feed & Grain/Triple X/Ott Chevy.

“Last weekend, I finally wrapped my head around what the problem was with what we were doing with the car and got it changed,” Ballou explained. “We weren’t a whole lot better qualifying, but the car is reacting to the changes now, where before, we were catching instead of pitching. We’ve made some small gains now and I think we can end up in victory lane.”

Furthermore, Alex Bright’s (Collegeville, Pa.) time of 2:24.412 in Simpson Race Products heat race one broke the 10-lap USAC AMSOIL National Sprint Car track record at Grandview, which had been held by Mat Neely since the series’ first race at the track in 2007. Neely’s time was 2:27.30.

**Steven Drevicki flipped on lap 29 of the feature.