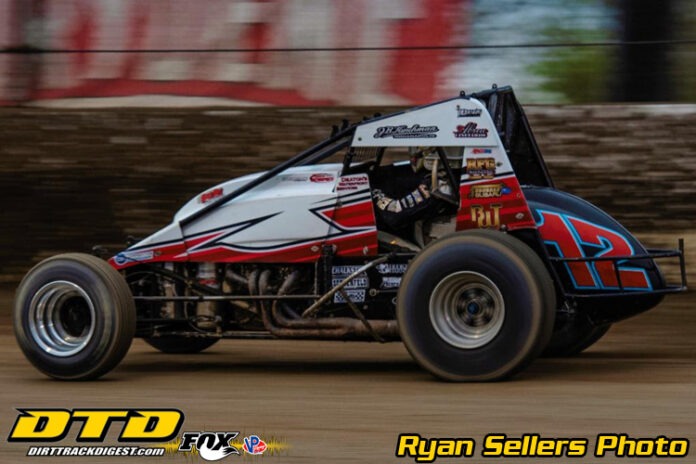 Thirty laps. That’s how long it took the Rocklin, Calif. native to return to the USAC win column for the first time since June 17, 2018 at Pennsylvania’s BAPS Motor Speedway.

To be more succinct, Eldora’s second #LetsRaceTwo A-Main of the day came down to the final five laps with Ballou fending off a furious charge courtesy of the seemingly unstoppable Tyler Courtney, who won the matinee earlier in the day, and had won every series race at the track dating back to 2018, a span of five races.

With a USAC record sixth-straight at The Big E in sight and the lap count dwindling, Courtney tracked down Ballou in short order, throwing everything in his arsenal to get by Ballou. At the line, the two past USAC National Sprint Car driving champions were separated by a single car length with Ballou prevailing over Courtney in what was the closest finish of the series’ season – 0.085 sec. – a win worth $10,000 for Ballou.

In reality, Ballou’s road back to the top is immeasurable. Shortly after the BAPS win, Ballou suffered a compound fracture of his right arm in a sprint car crash at Kokomo (Ind.) Speedway. Sidelined for a substantial stretch of time in which he endured both the pain and the rehab, the climb back has been leading to this crescendo at a venue in which he’s earned six of his 30 career wins with the series.

“It’s been a few years,” Ballou noted. “I broke my arm after my last win, and it’s been a humbling experience. You’re either on top or you’re on the bottom. There’s nobody that has more dedication in this sport than my team and my guys and everyone that’s behind me. We have a never-give-up attitude and we never back down.”

However, to get back on top, there are countless hurdles to overcome, and Ballou encountered one more just prior to the feature following a dominant heat race win earlier in the night, one that attempted to derail them and decide their fate prematurely.

“After that heat race, apparently, we blew up that brand new engine,” Ballou stated. “So, we thrashed until the (USAC officials) blew the (eight-minute horn). We got the motor changed, and with everybody here back at the trailer, it was a full-out team effort, and it was down to the wire. We got the thing started and still had a bunch of changes to make to try and keep up with this race track.”

Ballou’s entire crew and family on hand became involved in the process of the engine swap and had the Ballou Motorsports/Suburban Subaru – Berks Western Telecom/Triple X/Ott Chevy ready to roll off from the pole position while Courtney pushed off from the seventh position.

The afternoon feature saw Ballou finishing second to a dominant Courtney. The tables were turned in the night session with Ballou blasting away to his own early race superiority while Courtney took on the role of chaser.

By midway, Ballou was already making his way through lapped traffic, high, low and anywhere in between to build as much of a cushion as he could. Meanwhile, Courtney had carved his way to second by Chris Windom on the 15th lap, but still found himself a full straightaway behind and combing through the same traffic that Ballou, himself, had recently cleared.

By lap 23, Ballou’s full straightaway lead over Courtney had been sheared to a half-straight. Two laps later, the lead was a mere two car lengths, setting up a frenzied run to the finish. With both running the fence, the classic, patented Eldora slide job was at the forefront of Courtney’s repertoire as he tried to deliver the knell to Ballou twice between turns one and two with four laps remaining, then again with three to go. Yet, Ballou kept his foot on the throttle and escaped Courtney’s jabs utilizing the momentum up top.

On the 28th lap, the two encountered the lapped car of Isaac Chapple running the middle line entering turn three. Ballou dove low underneath Chapple while Courtney stayed up top. Ballou attempted to slide past Chapple and reclaim the high line up to the wall. Ballou first cleared Chapple by inches, then he and Courtney banged wheels, with Ballou’s right rear meeting face-to-face with Courtney’s left front. Courtney ricocheted off the wall, straightened it out, ducked low, then followed Ballou nose-to-tail into one.

Courtney shadowed Ballou all the way around the half-mile high banked dirt oval as the pair made their way to the white flag. Seemingly awaiting Courtney’s final slider attempt in turn one, instead, Courtney bounced his right rear off the fourth corner concrete coming to the white, stifling his plans, and putting him back into line on the high side just behind in his endless pursuit of Ballou.

On the final lap, Courtney remained behind Ballou by two car lengths, opting to tail Ballou to the top in turn three, then cut under off four. Ballou was smooth, steady and steadfast, and powered off the fourth corner to defeat Courtney by a car length to notch the win with Courtney second, Chris Windom third, series point leader Brady Bacon fourth and Paul Nienhiser scoring a best career USAC finish to round out the top-five.

Just hours after Courtney reached USAC Sprint Car victory number 30, Ballou reached the same number for 14th on the all-time list. Similarly, earlier in the day, Courtney became the first three-time #LetsRaceTwo feature winner, which Ballou matched later in the night. Both also swapped finishing position with Ballou the runner-up to Courtney in the afternoon and vice versa at night.

Ballou knew he still had what it takes to be at the level of winning consistently and being the thick of the championship race, but he also knew he needed the equipment to match. Safe to say, he’s found his match.

“Everyone’s questioning my ability to do this, but I just said, ‘if we can get a car that I can get comfortable with, we’ll be on top,’” Ballou said. “We switched to a Triple X chassis and got a couple new Don Ott engines and we’re just trying to plug away.”

Courtney was aiming to make USAC history on this night aboard his Clauson-Marshall-Newman Racing/NOS Turbo – ZMax/Spike/Chevy. A 6th consecutive USAC National Sprint Car win at Eldora would’ve made him the first driver ever to win that many in a row at a single track in series’ history. His five-straight USAC Sprint winning streak at one track gives him the shared distinction with Jim Hurtubise (1960-62 at Terre Haute) and Steve Chassey (1979 at Winchester).

Furthermore, Courtney (Indianapolis, Ind.) came a car length short of becoming the 21st driver to win multiple USAC National Sprint Car feature races on a single calendar day, and the first since to do so since Bud Kaeding at Terre Haute in 2001. Only twice had a driver won two USAC Sprint Car races in one day at Eldora: Pancho Carter in 1976 and Billy Cassella in 1979.

Besides Ballou and Courtney, Windom (Canton, Ill.) was the lone other driver to record two top-five finishes on Saturday. Windom earned a 5th in the afternoon and a 3rd at night in his Hayward Motorsports/NOS Energy Drink – B & H Contractors – AMSOIL/DRC/Claxton Mopar.

Kevin Thomas Jr. (Cullman, Ala.) moved ahead of Pancho Carter by earning his 31st career Fatheadz Eyewear Fast Qualifying time with the USAC AMSOIL National Sprint Cars on Saturday night. That moved Thomas into a tie with Sheldon Kinser for 9th on the all-time series list in that category.