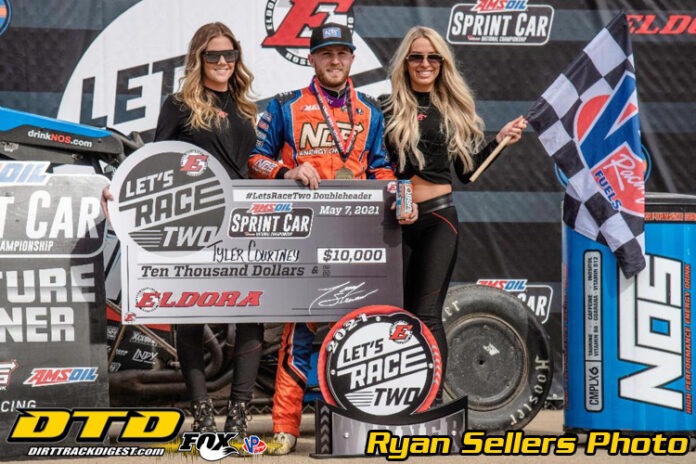 ROSSBURG, OH – Amid Tyler Courtney’s amazing string of success at Eldora Speedway, perhaps none were more impressive than the performance he put on at the high-banked half-mile oval on Saturday afternoon to score his fifth consecutive triumph with the series at The Big E dating to 2018, this one worth $10,000.

Courtney led all 30 circuits from start to finish after starting from the pole in his Clauson-Marshall-Newman Racing/NOS Turbo – ZMax/Spike/Chevy, living up to his sponsor’s name by putting all but the top-six finishers a lap down at the finish line, thrashing the 22-car field in a caution-free race in which the Indianapolis, Ind. racer made USAC history.

By winning his fifth consecutive feature event at Eldora, Courtney became just the third driver in USAC National Sprint Car history to win five-in-a-row at one track. Jim Hurtubise won five-straight at the Terre Haute (Ind.) Action Track between 1960-62 and Steve Chassey did the same with five successive at Winchester (Ind.) Speedway in 1979.

“It’s very special,” Courtney said. “I never could’ve imagined winning one race at Eldora, let alone five in a row. We’ve got something figured out at this place. I love coming back here. Thanks to (promoter) Roger (Slack) and (track owner) Tony Stewart and everybody here at Eldora for putting up the extra money for the USAC guys.”

Additionally, Courtney became just the 14th driver to win at least 30 career USAC National Sprint Car features. His 30th moved him ahead of Robert Ballou and Kevin Thomas Jr. for 14th on the all-time list.

A rare daytime dirt show – a more common occurrence in decades past – presented a challenging racetrack to navigate. However, the conditions proved to be no barrier for Courtney.

By lap six of the 30-lap feature, Courtney had ramped up his lead to a full straightaway and was thrust into lapped traffic only eight laps in as he slipped through a four-wide, turn one sandwich alongside Carmen Perigo, Tanner Thorson and Stevie Sussex to extend his advantage.

High-riding on the paper-thin cushion located just inches from the outside concrete, Courtney whipped around traffic with mere inches to spare at moments, many times opting to go a lane higher than the car in front of him rather than throwing a slide job. However, he performed all of the above with perfect precision before reengaging his highwire act up against the concrete.

On the 28th lap, Courtney remained adamant to put an exclamation point on this one, rather than chocking up down the stretch, he split between the already lapped car of Brandon Mattox and the newly lapped car of 7th running Kevin Thomas Jr. and was beginning to bear down on 6th running Brady Bacon when the checkered flag flew.

Courtney wound up a whopping 5.477 seconds ahead of runner-up finisher Robert Ballou with Jadon Rogers, Justin Grant and Chris Windom rounding out the top-five.

“You always want to beat everybody,” Courtney admitted. “It’s really a combination of everything. We qualified really well and had great track position. Everything had to go perfect last night to catch the invert and sit on the front row. That makes the night go a lot smoother when you can start up front and run your own race from the drop of the green and have a really good car at the same time.”

Robert Ballou (Rocklin, Calif.) earned his best series finish of the season, finishing as the runner-up to Courtney aboard his Ballou Motorsports/Suburban Subaru – Berks Western Telecom/Triple X/Ott Chevy. For the 2015 series champ, it was his ninth consecutive top-ten finish in his last nine feature starts, tops in the series.