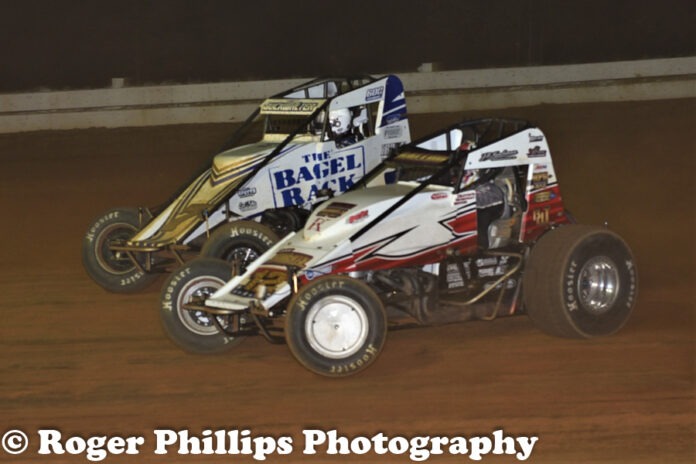 BRANDON, SD – The format for all three nights of the inaugural Huset’s Speedway USAC Nationals has been revealed for the event at the Brandon, South Dakota 3/8-mile dirt oval on September 10-11-12, 2021, which features a purse in excess of $200,000.

On “Championship Night,” Sunday, September 12, a full slate of racing awaits. All lineups will be based off the accumulation of points earned throughout the first two nights and two new champions will be crowned with each being rewarded a $20,000 payday for their efforts. Both A-mains on Championship Night will also reward starters with a minimum of $1,000 to start.

Nights one and two will showcase a unique format that begins with each driver drawing and placing themselves into a group to qualify, and then race, followed by heat race inversions, last chance qualifiers and large field inversions for both the Midget and Sprint Car divisions.

During the final night, Championship Night, there will be no qualifying held, as heat race lineups will be determined by points from nights one and two, placing extra competition into the heats in order to gain valuable points, then concludes with a 40-lap feature for the Sprint Cars and a 100-lap main event for the Midgets.

“Our format will be similar to the one we ran for the inaugural Hangtown 100 and has been used for years at the Trophy Cup,” event promoter Matt Wood stated. “I have always wanted to bring midgets to Huset’s. Joining forces with USAC and getting a chance to host the USAC Nationals with the USAC NOS Energy Drink National Midgets and USAC AMSOIL National Non-Wing 410 Sprint Cars at such a premier facility is every promoters dream.”

Wood thanks track owner Tod Quiring and General Manager Doug Johnson for the opportunity to bring such an exciting event to one of the best and nicest facilities in America and, with everything added up, Wood chalks this event up as one of the majors on the USAC tour at a premier racetrack with a star-studded cast of drivers and teams all with their eyes fixed on capturing the biggest prize of the year, one that simply cannot be missed out on.

“There’s nothing about this event that isn’t perfect.” Wood exclaimed. “The checklist includes Huset’s Speedway, one of the country’s top dirt track facilities; the Huset’s Speedway fan base; one of the premier sanctioning bodies in racing today, USAC, with USAC Midgets and USAC Non-Wing 410 Sprint Cars all racing for over $200,000 in cash. This is a must-attend event!”

The event is the highest paying event of the 2021 USAC National season. Tickets for all three nights of the event are on sale now at www.USACnationals.com.

Only twice in USAC’s history have series events been held at Huset’s. Kenny Irwin Jr. won the midget debut there in 1996 while Chad Boespflug swept both nights of a 410 sprint car meet at the track in 2016.

Seeing an uncertain future in recent years, Huset’s Speedway was rescued and purchased by longtime sprint car owner and, more recently, track owner Tod Quiring, and is under the management of Doug Johnson, who also manages Quiring’s other track acquisition, the Jackson Motorplex in Minnesota.

Wood, a long time sprint car and midget team owner, who recently joined forces with USAC and entered the promotion side of things with the inaugural running of the Hangtown 100 in Placerville, Calif. in 2019, is also the promoter of the USAC Nationals.

Additional details about the more than $200,000 total purse and contingency awards will be released in the future.

Heat race placement selection (driver picks which heat to participate in and the order to qualify.
Qualifying: All cars qualify – 6 groups determined by heat race. Cars will qualify in the order picked by drivers. 36 points will be given for fast time in each group, and minus three points per position thereafter.

Six 10 lap Heat Races: Top 8 cars inverted in heats by qualifying points/time. 36 points will be given for first place, and minus 3 points per position thereafter. Three cars – first place (regardless of point total), and the two highest in total points (total points include qualifying and heat points) in each heat – transfer to Night One & Two A-Main. All others to Night One & Two Last Chance Qualifiers.

Three 12 lap Last Chance Qualifiers: Total points from qualifying and heat race finishes will be used to line up LCQ’s. Lineups will be straight up based on points. The top 3 in total points will start on the pole in each respective LCQ. The next 3 in total points will start outside pole in each respective LCQ, and so on. The top 2 from each LCQ will transfer to the Night One & Two A-Main but will not earn LCQ points. 50 points awarded for 3rd place minus 2 points for each position thereafter.

No Qualifying. Lineups based on total points from night one and night two (CUMULATIVE).

Six 10 lap Heat Races: Top 8 cars inverted in heats by total points from night one. 36 points will be given for first place, and minus 3 points per position thereafter.

A-Main: 100 Laps, 24 Cars. Top 12 inverted by points, followed by next 8 in points lined straight up, followed by B-Main transfers 1-4. 150 points awarded for first place and minus 3 points per position thereafter. Yellow laps counted for first 50 laps.

**Ties in overall points will revert to qualifying times.

**Promoter reserves the right to add provisionals to the Championship Night A-Main.