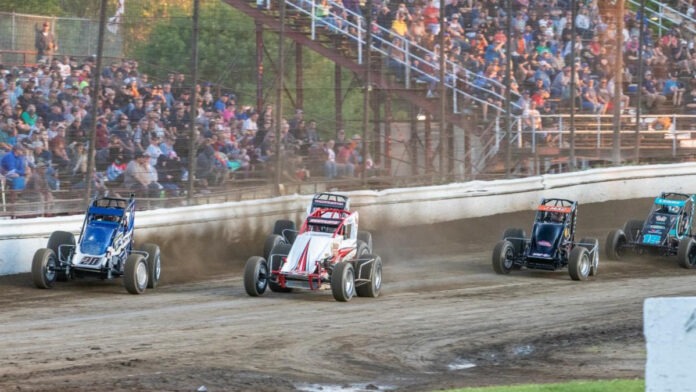 SPEEDWAY, IN – The year of 2020 was a harsh one in a myriad of manners. One such casualty was Eastern Storm, which had been an annual treat for our Eastern brethren of racers and race fans alike each June since the inception of the mini-series in 2007.

Eastern Storm was ultimately nixed, and a void was felt in its absence, and for the first time in a decade-and-a-half, the roar of USAC AMSOIL National Sprint Cars at venues in Pennsylvania and New Jersey fell silent.

The year of 2021 has already given us so much and brought USAC’s brand of 410 c.i. National Sprint Car racing without the wing to the East not once, but twice. A late-April four-race set whetted the appetite as a four-course appetizer for Eastern Storm and didn’t let us down, each event of which saw their own bit of history.

The Sprint Cars begin 2021 Eastern Storm on Tuesday, June 15, at the 1/3-mile Grandview Speedway in Bechtelsville, Pa., the only track that has appeared on the schedule since Eastern Storm’s inaugural run in 2007.

The following night, on Wednesday, June 16, the Sprint Cars will make their debut on the recently reconfigured 4/10-mile Bridgeport Speedway in Swedesboro, N.J.

A night off for the Sprint Cars doesn’t mean a night off for USAC racing on Friday, June 18, when the USAC Silver Crown Champ Car Series races its way to Mechanicsburg, Pennsylvania’s ½-mile Williams Grove Speedway.

USAC Sprints get back to work on Saturday night, June 19, at Port Royal (Pa.) Speedway’s ½-mile. The tour closes out on Sunday night, June 20, with the USAC Sprint Car debut at the newly rejuvenated Bloomsburg Fair Raceway 3/8-mile dirt oval in Pennsylvania, where the sight and sound of auto racing of any kind has been absent for the past 40 summers.

Bacon will attempt to join an exclusive list of drivers who’ve won five consecutive USAC National Sprint Car features at a single track. Jim Hurtubise won five in a row at Indiana’s Terre Haute Action Track between 1960-62; Steve Chassey took five-straight at Indiana’s Winchester Speedway in 1979; and Tyler Courtney notched his fifth in a row at Ohio’s Eldora Speedway earlier this year in the month of May.

One of the best developments in Sprint Car racing over the past few years is the formation of the USAC Rapid Tire East Coast Sprint Car Series presented by Capitol Custom Trailers.

Since the 360 c.i. series’ debut in 2018, the group has created a groundswell of local talent that not only has provided an extremely competitive series in itself, but also a crop of drivers who can strap in a 410 engine and stand up to compete successfully when the National series arrives on its home turf.

Collegeville, Pa.’s Alex Bright (Hummer Motorsports #20) leads the USAC East Coast standings with three victories in 2021 and passed a whopping 38 cars in four races during the first USAC National Sprint Car tour of the East back in April of this year. Allentown, Pa.’s Briggs Danner (Bill Gallagher #5G) is a close second in the EC, and he was exceptional with the National series in April, earning fast time during qualifying at Grandview.