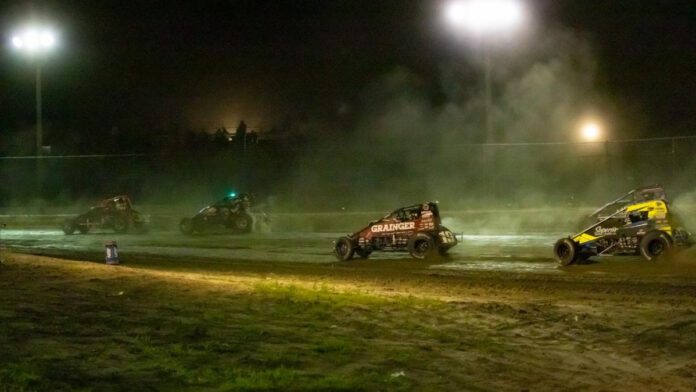 SWEDESBORO, NJ – The last time the Eastern Storm tour visited Swedesboro, New Jersey’s Bridgeport Speedway, the USAC AMSOIL National Sprint Cars were greeted by the newly-constructed 3/8-mile dirt oval constructed within the 5/8-mile track that served as the perimeter of the confines.

On Wednesday night, June 16, USAC will make what is basically a second debut at Bridgeport, which has now galvanized the two tracks into a high-banked 4/10-mile dirt oval, which the series will make their first trek to.

Only 10 previous USAC National Sprint Car races have been held in the state of New Jersey, and just two at Bridgeport, in 2018 and 2019. Kevin Thomas Jr. won the 2018 race while Jason McDougal held off Thomas to win in 2019. Thomas (Cullman, Ala.) also earned quick time honors in 2018.

Rocklin, California’s Robert Ballou, the 2015 Eastern Storm champion, is a USAC National Sprint Car winner in the state of New Jersey. At Bridgeport, Ballou finished 6th in 2018 and 10th in 2019, winning his heat races in both of those years.

The USAC Rapid Tire East Coast Sprint Cars have made annual visits to Bridgeport each year since 2018. On the new layout, Briggs Danner (Allentown, Pa.) has won twice, first in 2020 then again in their EC season opener in April.

Steven Drevicki (Reading, Pa.), the three-time USAC East Coast Sprint Car champion in 2018-19-20, has won in a USAC SpeedSTR feature on the new Bridgeport layout, doing so in 2020. He was 12th there during Eastern Storm in 2019 as well. Fellow East Coaster Timmy Buckwalter was 13th in Bridgeport’s inaugural Eastern Storm event in 2018.

Chase Stockon held the one-lap USAC Sprint Car track record at the 3/8-mile version of Bridgeport in 2019. A new record will be established on Wednesday. Stockon has raced to a pair of top-fives in each of his Bridgeport starts, taking 5th in 2018 and 4th in 2019 along with a heat victory in 2018.

Other first-time Bridgeport appearances will be turned in by a pair of past USAC National Midget champions in Minden, Nevada’s Tanner Thorson (2016) and Sutter, California’s Logan Seavey (2018). Thorson has already won twice with the USAC AMSOIL National Sprint Cars in Pennsylvania this year and leads all series Rookies in the standings.

Jake Swanson (Anaheim, Calif.), the 2017 USAC West Coast Sprint Car champion, nearly collected a Pennsylvania state victory during Keystone Invasion, finishing 2nd at Big Diamond. Paul Nienhiser (Chapin, Ill.) made the trip out East this past April but will try his hand at Eastern Storm for the initial time this week.

Also in the field are USAC’s 2020 National Most Improved driver, Brandon Mattox (Terre Haute, Ind.) who finished 5th in his latest Pennsylvania appearance in April 2021. Shane Cottle (Kansas, Ill.), a 2013 Eastern Storm winner at BAPS, is back on the tour for the first time in five years. Charles Davis Jr. (Buckeye, Ariz.) is an Eastern Storm first-timer with the highly decorated racer owning a 2018 USAC Southwest Sprint Car driving title. Three-time 2021 Indiana Sprint Car feature winner Ricky Lewis (Ventura, Calif.) made a run through the four-race Keystone Invasion series in April and will be back once more for his Eastern Storm debut.

All Eastern Storm events will be streamed live on FloRacing at https://bit.ly/3dgONXz.