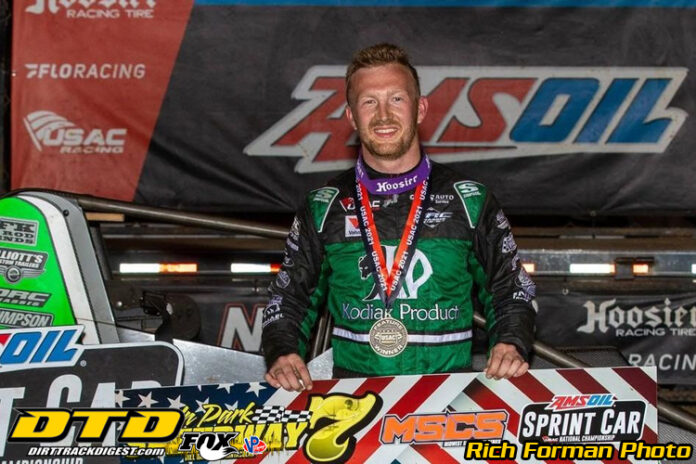 PUTNAMVILLE, IN – “We can’t win all three if we don’t win tonight.”

That was the mantra C.J. Leary relayed to crew member Maison Hadley prior to leaving the shop on Thursday morning as the team embarked on this weekend’s three-race USAC AMSOIL National Sprint Car slate in a three-night span.

The Greenfield, Ind. native knocked out the first phase Thursday night at Plymouth (Ind.) Speedway, then carried the winning formula into Friday night’s Bill Gardner Sprintacular opener at Putnamville, Indiana’s Lincoln Park Speedway where the 2019 series champion started 11th in the 23-car field, then tracked down Jake Swanson and slid by for the lead just three laps from the finish to earn his second win in as many nights.

Victories throughout Leary’s career have seemingly arrived in bunches. In fact, eight of his now 14 career USAC National Sprint Car feature triumphs have come in consecutive races. The 14th score moved him past Steve Chassey and into a tie with Billy Cassella, Lee Kunzman, Chase Stockon and Bruce Walkup for 41st all-time.


Leary’s weekend thus far has already doubled his win output from the first 16 races of the season. After a U-Joint malfunction at Bloomsburg (Pa.) Fair Raceway during qualifying on June 20, Leary was forced to pull down the untested “backup” Michael Motorsports/Kodiak Products – Gray Auto – Valvoline/DRC/Cressman Ford machine that the team had constructed this past Winter.

The new car went 21st to 7th at Bloomsburg in its first outing, won at Plymouth on Thursday in its second test, then aced the third exam on Friday. Leary feels they’ve finally found the comfort, the confidence and the stride they’d been longing after for the first several months of the season, yet it came after an inauspicious beginning to the evening at Lincoln Park.

“I think we’ve hit on something,” Leary relayed. “This second car has been really good, but I don’t know what happened in group qualifying tonight. We started our night off 34th quick. I don’t think I’ve ever been that bad before. I said these races were hard to win if you aren’t on the front row, and I kind of debunked that idea.”

It was in Plymouth’s victory lane the night before that Leary declared that particular sentiment after winning from the pole, but he’d have to dig in deep for 30 laps on the 5/16-mile dirt oval after having to begin his race from the inside of row six.

An adverse start to the feature saw contact between fifth-starting Kyle Cummins and the rear bumper of fellow third row inhabitant Shane Cottle on the bottom of turn one on the opening lap, which sent Cummins into a 180-degree loop and stopping at the edge of the infield and the racing surface.

Meanwhile, up at the top of turn one, as the trailing field scrambled to miss the melee, 16th starting Ryan Thomas climbed the wheel of another car and flipped wildly over the banking. The first-time USAC National Sprint Car feature starter was uninjured.

While Leary was picking his way through the pack, outside front row starter Brady Bacon had established his footprint as the driver to beat early on. Once Bacon surpassed pole sitter Zach Daum in turn on the initial lap, he quickly applied the hammer forcefully to nail down a half-straightaway lead within the first three laps while third-starting Jake Swanson slotted into the runner-up spot past Daum.

Methodically, Swanson edged his way closer and closer to Bacon, decreasing his deficit from 1.7 seconds to 1.2 between lap nine and lap 11, and dropping the interval another half-second to 0.7 on lap 13. By the 15th circuit, Swanson had arrived right at the rear bumper of Bacon entering the first turn.

A narrow escape of misfortune for both Bacon and Swanson came on the 15th lap when Bacon entered the high line of turn one, then rotated his car to dart straight down to the bottom of turn two. Not fully expecting that sequence to unfold was Swanson who narrowly avoided contact between his right front wheel and Bacon’s left rear corner.

A similar occurrence came to a head on lap 17 for Swanson and Bacon between turns one and two. Swanson’s heart skipped a beat for a second time, but after straightening his car out, Swanson didn’t miss a beat in re-tracking down Bacon for the race lead, which he did amid traffic, making a beeline off the turn four cushion, then sliding up in front of Bacon in turn one just inches apart from each other without a single ounce of contact.

Three laps later, Leary tore around the outside of Bacon in turns one and two for the second spot, then rapidly encroached on Swanson’s territory at the front.

Interestingly enough, Leary was unsure of where he stood in the running order at the moment despite being just one position out of the lead. However, it didn’t take long after that for Leary to realize where he stood and the opportunity that lie ahead of him.

“I passed Brady there late in the race and I really didn’t know what position I was in at that point,” Leary explained. “I looked up and saw Jake and didn’t really see anybody else. I was like, ‘I don’t think someone could be that far ahead.’ I reeled him in, got a couple good sliders on him, and I thought I finally had him cleared there when the red came out”

Leary had slid past Swanson between turns three and four on both lap 26 and 27, but each time, Swanson cut back underneath to beat Leary to the line by a half-car length with four laps to go and by half a wheel with three laps remaining when the red flag was displayed for a turn two flip by 14th running Cole Bodine.

With Leary in deep contemplation as he awaited the close of the red flag period, he was fully conscious Swanson was going be “elbows up” and tough to pass. However, Leary stuck to his guns and tried the same turn three maneuver once more when action resumed on the 28th lap. Nonetheless, Swanson had an answer by matriculating his way back under Leary to get to the line first by a full car length with two laps left.

Leary took the game to the other end of the racetrack on lap 29, diving to the bottom at the entry of turn one and gliding his way past Swanson to the top in turn two. Swanson momentarily stumbled atop the turn two cushion, losing momentum as he managed to pull himself even with Leary’s left rear midway down the back straightaway.

Responding with a resounding shut of the door, Leary collapsed on the low line at the approach to turn three, keeping Swanson behind him to lead the way to the stripe for the first time. Leary secured his position at the front for the remaining lap-and-a-half to become the third three-time series winner of 2021, joining Justin Grant and Kevin Thomas Jr. as the leaders in the clubhouse.

Leary’s advancement from 11th to 1st equaled the furthest back any winner has started this year. Kyle Cummins also won from the 11th position at Haubstadt, Indiana’s Tri-State Speedway in April.

Swanson and Leary are good friends and were Alex Bowman Racing teammates during the Chili Bowl Midget Nationals this past January. For the second time this season, Swanson led laps but ultimately finished 2nd in his Team AZ Racing/USW Cat Construction – RSS Industries – CSI – Lucas Oil/DRC/1-Way Chevy. That equaled the best career series finish for the Anaheim, California native who remains on the hunt for his first career USAC AMSOIL National Sprint Car feature win.

“It hurts. I really, really want that USAC win,” Swanson admitted. “C.J. is a really good racecar driver, and to be running up front with these guys, it says a lot about this race team; it says a lot about how far we’ve come in just a short amount of time. All we can do is race and figure out how we can be better. I feel like I raced pretty good. I don’t know if there’s a few things I could’ve done different or better. I feel like, in hindsight, I should’ve done this or that, but at the same time, if it would’ve gone green all the way, who knows? Either way, C.J. was obviously a little bit better there. He could slide up to (the cushion) and hit it, and he had a lot of drive.”

Shane Cottle (Kansas, Ill.) was victorious on the opening night of the Bill Gardner Sprintacular one year ago after starting sixth. Starting from the same sixth position again on Friday night, Cottle worked his way to a third-place finish aboard his Hodges Motorsports/Ortega’s Appliance – CSI – Parts Plus/DRC/J & D Chevy, and felt, with just a little bit more time, he might’ve had a little something for Leary and Swanson at the finish.

“The track was a little technical and you had to hit your marks really good,” Cottle noted. “The slick coming off of two, if you missed that, you were a sitting duck. The Hodges team put a good car under me. I screwed up after that red there late. I got it too tight and pushed the nose there. I thought I had something for them there. I’ll take that one and put it on my shoulders. These guys work their butts off, and I appreciate everything they do.”

Cannon McIntosh (Bixby, Okla.) picked up KSE Racing Products Hard Charger honors in what was his first career USAC National Sprint Car feature start, driving from the 20th starting spot to finish 8th in his Daigh-Phillips Motorsports/Frank & Jill Daigh – Hitch-It – Jockish Flowers/DRC/Foxco Chevy. The performance came just 24 hours following a crash while running in a transfer spot during the semi-feature at Plymouth, which delayed his highly-anticipated initial series start by one day.

In Fatheadz Eyewear Qualifying, Kevin Thomas Jr. earned his season-leading fifth “quick time” and the 34th of his USAC National Sprint Car career, putting him just one shy of Rich Vogler for eighth on the all-time list.

The co-sanctioned event with the Midwest Sprint Car Series utilized the MSCS format, which included group qualifying and a top-four heat race inversion rather than USAC’s traditional single-car qualifying, top-six heat race inversion. Due to the nature of differing program format from the standard USAC event, 50 appearance points for all licensed USAC National Sprint Car drivers and entrants were issued regardless of finishing position.