KNOXVILLE, IA – The richest one-day USAC AMSOIL Sprint Car National Championship event of the year is upon us, and for the majority of the last two seasons in the event, there’s been one driver who’s constantly been the one all others have been chasing – Brady Bacon.

The Corn Belt conversation begins with Bacon. The three-time USAC AMSOIL National Sprint Car champion from Broken Arrow, Okla. is the winningest driver with the series at the half-mile dirt oval, emerging victorious on four occasions. His prowess at the Corn Belt Clash over the past couple of years has been phenomenal, including a two-night sweep of the inaugural Corn Belt Nationals in 2019, a 2nd place finish in the 2020 prelim and a dominating final night win in last year’s finale, which has netted him a total of $48,000 in prize money between 2019-2020 for those four races alone.

Bacon’s success at Knoxville dates to his Rookie USAC season of 2006 where he scored a pair of runner-up finishes on two-straight nights of Midget racing, leading a combined 11 laps in the process. In his first USAC Sprint Car appearance at Knoxville in 2010, Bacon was 2nd again. The following year, in 2011, the eventual two-time series champ authored a complete sweep of the night, recording quick time in qualifying, winning his heat and scoring the feature victory. In 2017, he ran 10th in the main and, in 2018, he led the first 19 laps of the 30-lap event, ultimately finishing 3rd.


Ione, California’s Justin Grant was the king of Knoxville in 2017, leading all 30 laps en route to the victory. When Grant returned with his new team in 2018, TOPP Motorsports, he didn’t miss much of a beat, finishing 4th in the main event. In 2019, he was 5th and 6th on each of the two nights and was the fastest qualifier on the second night. In 2020, the reigning USAC Silver Crown champion finished on the podium each night at Knoxville, taking 3rd on night one and 2nd on night two.

Kevin Thomas, Jr. (Cullman, Ala.) was the fastest qualifier at Knoxville in 2017 and his lap of 18.548 still stands as the one-lap USAC National Sprint Car track record. The Cullman, Ala. driver’s Knoxville results in 2019 were solid with a 3rd on night one and a 4th on night two. On the first night, he led three laps. He was also 7th in 2017 and 10th in 2018. In 2020, Thomas took home a 13th on night one and 16th on night two and enters the event having won $7,000 during last Saturday’s Bill Gardner Sprintacular at Indiana’s Lincoln Park Speedway.

C.J. Leary (Greenfield, Ind.) is the only driver to have finished in the top-five at Knoxville in each of the past four years. He continued that streak in 2020 with a 5th on night one, in addition to fast qualifying time, and earned a 3rd on the final night. He was the fastest qualifier on night one in 2019, then finished 9th in the feature. The 2019 USAC AMSOIL National Sprint Car champion started 4th and finished 2nd on night two. After capturing a semi-feature victory in 2017 at Knoxville, he turned up the wick to finish 5th that night and climbed up the pylon to a runner-up result in 2018.

Chris Windom finished 4th on both nights of the Corn Belt Clash in 2020. He led nine laps and finished 2nd in the 2019 Corn Belt opener while garnering a 5th on night two. The Canton, Ill. native was 2nd behind Bacon at Knoxville in 2011 following an 8th place finish in 2010. The 2017 series champion scored feature finishes of 6th in 2017 and 9th in 2018. His 6th place result in 2017 came in a hard-charging performance in which he started from the 18th starting position.

Robert Ballou (Rocklin, Calif.) set not one, but two Knoxville USAC Sprint Car track records on the same evening during the 2020 Corn Belt Clash, rewriting the books with a new 10-lap time of 3:09.379 and a 16-lap mark of 5:25.068. The 2015 USAC AMSOIL National Sprint Car champ took hard charger honors on the final night, finishing 8th after starting 19th. His first USAC start at Knoxville came in 2010, finishing 7th, which is where he also finished in 2018. Thus far, his best Knoxville result came in a runner-up performance in 2017.

Chase Stockon’s productivity at Knoxville has displayed solid results of note, a 4th in 2017 6th in 2018 and a 7th and 8th in two 2019 starts serves as his best results in the event. In 2020, the Fort Branch, Ind. driver set a brand-new 12-lap USAC Sprint Car track record at Knoxville with a time of 4:26.089 and raced to feature finishes of 11th on night one and 9th on night two.

Jake Swanson (Anaheim, Calif.) has been knocking on the door for a first career USAC National Sprint Car win in 2021. The 2017 USAC West Coast Sprint Car champion’s first foray to Knoxville for the Corn Belt Clash in 2020 resulted in a pair of top-ten finishes, an 8th on the first night and a 10th on the second night.

Tanner Thorson (Minden, Nev.) was in the same boat last year as a first-time Knoxville Raceway visitor, with the 2016 USAC National Midget champ finishing 15th and 11th throughout the two nights of Corn Belt action. He currently leads the Rookie of the Year standings with the USAC National Sprint Cars entering Saturday’s contest.

Thomas Meseraull (San Jose, Calif.) has yet to compete at Knoxville, but will do so for the initial time this weekend in the Yeley Racing No. 2, the first appearance of the team in USAC Sprint Car competition at Knoxville since 2010 where driver Kyle Larson finished 17th.

USAC Rookie Paul Nienhiser (Chapin, Ill.) has prior experience at Knoxville with a wing, but the 2019 MOWA champion will contest his first series event at the track without one while Mitch Wissmiller (Saybrook, Ill.) and Robert Bell (Colfax, Iowa) will make return visits to Knoxville as they attempt to make their first Corn Belt Clash feature starting field.

A strong crop from the USAC Wholesale Batteries Midwest Wingless Racing Association have announced their intentions to race in this weekend’s Corn Belt Clash, a handful of whom have prior experience in the event.

Lincoln, Nebraska’s Don Droud, Jr., a top-five finisher in a USAC Midget at Knoxville in 2006 and a former one-lap track record holder at the half-mile in a wing sprint car, finished 13th on night one in 2019. The MWRA championship runner-up for 2020 was 19th and 17th at the Corn Belt one year ago.

MWRA point leader and two-time 2021 winner Wesley Smith (Billings, Mo.) was a 10th place finisher on the opening night of the Corn Belt Clash in 2020 and was a night one Corn Belt heat winner and 12th place feature finisher in 2019.

Three-time and defending POWRi WAR champion Riley Kreisel (Warsaw, Mo.) has won with WAR, with MWRA and ran inside the top-ten with the USAC AMSOIL National Sprint Cars as recently as a week ago. He scored his best Corn Belt finish of 12th on the final night in 2020 after starting on the front row the evening before.

Time trials will consist of two cars at a time for two laps each with the best time of the two counting as the official time for each driver. Heat races are 8 laps apiece with the top-6 qualifiers inverted in each heat. The top-4 finishers will transfer to the A-Main with finishers 5-8 going to the B-Main and finishers 9th through the balance of the field going to the C-Main.

Pits open at 2pm Central with sign-in at 3:30pm and the draw closing at 5:45pm. The drivers meeting takes place at 6pm with engine warm-up at 6:15pm followed by hot laps.

FloRacing will have live coverage of the entire USAC portion of the BRANDT Corn Belt Clash (practice, qualifying, prelims and the main event) exclusively at https://bit.ly/3dgONXz. 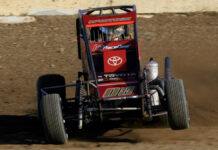 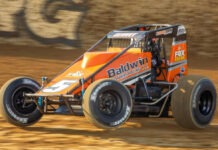