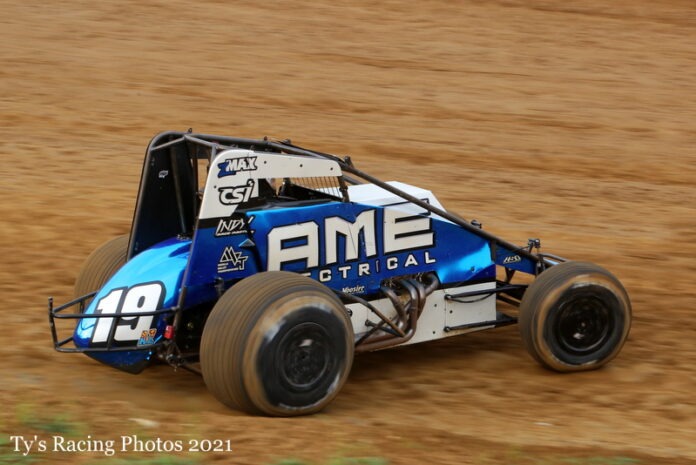 A last lap caution set up a green-white-checkered finish that Tanner Thorson utilized for one last shot. On the lap 30 restart, Thorson slid from the bottom of turn one up toward the top of turn two while Leary occupied the high side, nestled snugly against the cushion.

While the two were dead even, wheel-to-wheel near the top of turn two, Leary’s car biked on the curb, getting both left side wheels airborne before landing on all fours and skidding at the exit atop the second turn. Thorson raced by underneath to take over the lead while Windom followed suit to second, although Leary briefly returned to the runner-up spot on the 31st and final lap before Windom retook the spot off turn two.

Seavey possessed a three-race Indiana Sprint Week winning streak coming into Lincoln Park as he attempted to equal Jon Stanbrough’s record of four consecutive ISW victories over the course of 2006 and 2007.

But on this night, it was Thorson’s turn in just about the most dramatic of ways imaginable as Leary unbelted, hopped out of his car and made a beeline to “greet” Thorson in victory lane while Leary’s racecar continued to roll across the infield driverless until petering out halfway across the 5/16-mile dirt oval.

As Thorson came to a stop to celebrate, Leary put his foot down, quite literally, on the nose of Thorson’s car. Immediately, Thorson rose from his seat and the two exchanged blunt words, muffled only by the protection of their head sock and helmet, while also gesturing their displeasure quite animatedly.

Just as Seavey did last Sunday at Lawrenceburg, Thorson followed up his June Indiana Midget Week feature score at Lincoln Park with an Indiana Sprint Week win at the same venue in July. By doing so, Thorson became fourth ever driver to earn both victories at the same track in the same season, joining Seavey, Jerry Coons Jr. at Kamp Motor Speedway in 2007 and Bryan Clauson at Bloomington Speedway in 2013.

As with many situations in auto racing, one driver has an opinion on what went down while the other may have the complete opposite view from their vantage point. This particular occasion was no exception.

“I was going to apologize to C.J. for cutting it close, but he did the same thing at Path Valley,” Thorson said. “I was just kind of waiting for him to (make a mistake). He just kept getting tighter and tighter on the top. He probably could’ve crossed me back over, been back in the lead and won the damn thing. Hats off to my guys. (Crew chief Tyler Ransbottom) has been working really, really hard to get me more and more comfortable. This 19AZ is on rails. It’s clicking.”

On the other hand, despite earning his best finish of Indiana Sprint Week and his best result with the series since winning at Lincoln Park back on July 2, Leary wasn’t too peachy when all was said and done. The Greenfield, Ind. racer was in the driver’s seat of another likely victory after leading a race-high 23 laps that resulted in a bitterly unfulfilling third-place finish in his Michael Motorsports/Kodiak Products – Gray Auto – Valvoline/DRC/Cressman Ford.

Likewise to Thorson, Leary had his opinion on the interaction with he and Thorson at the end.

Thorson started his 30-lap race from the sixth position. Up front for the first six laps of the race was pole sitter Cole Bodine, only interrupted by the first terse interaction of the feature on lap four when Robert Ballou and Justin Grant contacted each other for the 10th position, sending Grant spinning to a stop.

On the lap five restart, Leary mounted a challenge toward Bodine for the lead, sliding by between turns three and four before Bodine cut back under off turn four to reestablish the top spot. However, on the seventh go-around, Leary stuck the bottom of turns one and two to secure the spot from Bodine.

Thorson, meanwhile, worked his way by Kevin Thomas Jr. for third on lap eight and overtook Bodine on the bottom of turn three soon after for the runner-up position on the 10th lap and began his pursuit of Leary and the race lead.

Leary and the trailing Thorson split their way through the lapped traffic with less than 10 laps to go, with Leary picking and grinning his way through a potential minefield that can spell disaster if not dissected properly.

It nearly did on lap 26 for leader Leary. While racing for the 12th spot with five laps remaining, Grant and Bodine connected in turn one with Grant climbing over Bodine’s left side tires, sending both spinning to a stop in the middle of the racetrack, which also collected 16th running Brandon Mattox in the process. Leary was just a car width to the outside of the incident, and narrowly avoided them all, as did Stevie Sussex.

Sussex wound up with B & W Auto Mart / KSE Racing Products Hard Charger honors by finishing 9th after starting 22nd while Grant and Bodine carved their way back through the field to finish 8th and 11th, respectively.

Resuming with just five to go and a clear track ahead of him, Leary appeared to have the race fully in control until a final lap accident halted Shane Cottle (5th) and Chase Stockon (6th) at the flag stand. Sitting backwards with terminal damage to his ride, Cottle spotted Thomas driving by during the yellow flag and fired his steering wheel at Thomas’ car.

That set up the final restart which led Thorson getting one last shot, elevating him to the spot and driving away to his third victory of the USAC AMSOIL National Sprint Car season, and his USAC-leading seventh combined win of the season between the National Sprint Cars and NOS Energy Drink National Midgets.

Splitting between the fracas of Thorson and Leary on the final restart was Chris Windom in his Hayward Motorsports/NOS Energy Drink – Byrd – B & H Contractors – AMSOIL/DRC/Claxton Mopar. Starting 11th, the Canton, Ill. native moved around the surface, running the diamond pattern to advance nine positions in the field and very nearly took advantage of all that transpired at the end, coming up one spot short of his first series win since May.

“I don’t know what those two did,” Windom said of the Thorson and Leary incident. I was coming across the bottom when I saw those two up there together. I wanted to try to throw a bomb on both of them but I kind of misjudged it and went back to the top. Overall, it was a great night for us. We had to come out of the semi-feature, then came from the fifth row up to second there in the feature. We get one step closer every night. We finished 3rd last night and 2nd tonight. We’ll just go to Bloomington tomorrow and win, I guess.”

Logan Seavey has taken over the point lead of Indiana Sprint Week with two races remaining on Friday, July 30 at Bloomington Speedway and on Saturday, July 31 at Tri-State Speedway in Haubstadt. Seavey holds a 15-point lead over Thorson with Kevin Thomas Jr. third, 22 points back.

Brady Bacon had led the Indiana Sprint Week points standings for the high majority of time thus far. However, on Thursday at Lincoln Park, Bacon did not even get the chance to take the green flag for the feature due to a mag issue after his car sheared a roll pin while pushing out for the feature, concluding Bacon’s run of 13 consecutive top-five finishes with the series dating back to May 8.