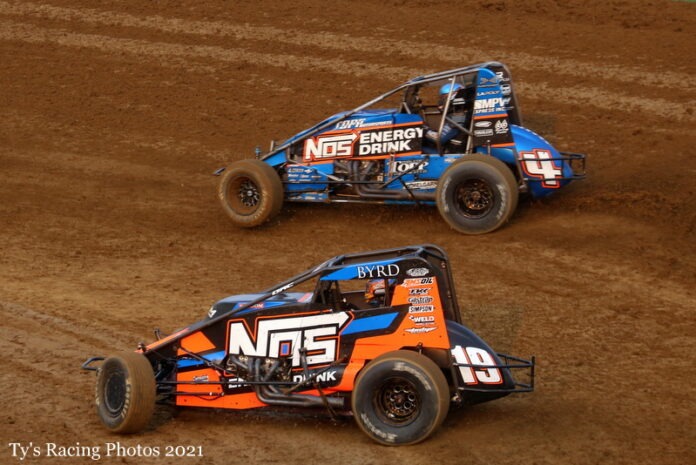 HAUBSTADT, IN – It’s a rare instance when both the first and second-place finishers of a race can celebrate in unison for their own, separate personal accomplishments.

For Justin Grant and Kevin Thomas Jr., that was the scene on Saturday night following the finale for USAC NOS Energy Drink Indiana Sprint Week By AMSOIL at Tri-State Speedway in Haubstadt.

Both veteran racers cut their own slice of triumph, one as a race winner at a track that has been a longtime nemesis, and another who reached the zenith of his racing summer.

Grant bookended the beginning and end of the seven-race ISW slate with a feature win at Kokomo to start and a Tri-State feature win to conclude the 34th annual edition of the series while Thomas capped the points race with a crown as the ISW champion for the second time in his career, and for the first time since 2017.

“We had some issues through the middle of sprint week,” Grant acknowledged after leading the final 29 laps of the 30-lap race aboard his TOPP Motorsports/NOS Energy Drink – MPV Express – TOPP Industries/Maxim/Kistler Chevy. “We started it with a win and ended it with a win. It was good, and we won a race at Haubstadt. I can’t believe it!”

Only five other drivers had won both the first and the last feature race during a single Indiana Sprint Week, and the first to do it in 17 years. Danny Smith was the first to accomplish the feat in 1989, followed by Kelly Kinser in 1994, Dave Darland in 1998, Cory Kruseman in 2002 and J.J. Yeley in 2004.

Grant’s 26th career USAC AMSOIL National Sprint Car victory worth $6,000 moved him past Steve Butler, Jay Drake and Parnelli Jones on the all-time list and into a tie for 22nd with Tony Elliott and Dave Steele.

There’s never a dull moment at Tri-State, for as easily as you think you have it handled, there’s something always there to contend with whether it’s the unpredictable nature of the style of racing on the 1/4-mile paperclip or the fact that traffic seems to come up quickly, even for a leader who was as “checked out” as Grant was.

“There were a couple times where I was all squirrelled up,” Grant remembered. “Fortunately, the thing would get digging and drive again. It certainly wasn’t the prettiest race I’ve ever won but it was enough to get the job done.”

Jackie Young, just days removed from earning a gold medal for Women’s 3×3 basketball at the Summer Olympics in Tokyo, Japan, presented the winner’s trophy to Grant in victory lane.

A succession of middling finishes throughout the past decade had Grant searching for answers on how to run up front at Tri-State. The answer came to him via his father-in-law, National Sprint Car Hall of Fame driver and ace wrench turner Bubby Jones, who assisted Grant in a number of manners prior to his passing in 2020.

“He’s not with us, but I’ve got to thank Bubby,” Grant recognized. “He knew how to get around here. He gave me a setup to run here a few years back and we were really fast, but I crashed the thing. We struggled and I kind of got away from it, then went back to the notebook and put Bubby’s set up back on it. It’s got Bubby’s ladder and Bubby’s shocks. It’s got the whole Bub tech tune. He’s not here, but I wish he was.”

Both Grant’s and Thomas’ paths to victory intersected each other throughout the race with Thomas leading the first lap from his outside front row starting position just before fourth-starting Grant power surged under Thomas in turn four to gain the lead on the very next lap.

Entering the 30-lap feature, Grant found himself on the outside looking in in terms of an Indiana Sprint Week title with five drivers remaining eligible. Logan Seavey led by nine with Brady Bacon nine back in second, Thomas third (-10), Tanner Thorson (-26) and C.J. Leary (-46).

Seavey was mired mid-pack throughout much of the feature. Earlier in heat race number two, Seavey was caught up in an incident that put him behind the eight ball for the remainder of the night, flipping his machine and necessitating a run through the semi-feature.

Previous night’s Bloomington Speedway winner Bacon faced a slightly different variation of struggledom in his own right at Tri-State with the team missing out on hot laps while they were busy swapping out the engine for another bullet prior to qualifying. A qualifying run chock full of challenges tested the team throughout the night, ultimately positioning themselves on the tail for the feature where they subsequently charged from 22nd to finish 8th, a valiant effort to capture KSE Racing Products Hard Chargers honors, but only enough to get to second in the final ISW standings.

Meanwhile, Kevin Thomas Jr. was in about as good of a position as you could ask for, sitting outside the front row for the main event where simply maintaining the position throughout the duration, while easier said than done, would put him in a prime position for the title.

That quest for Thomas very nearly became his undoing when the lapped car of Cole Bodine spun sideways in turn four on the 17th lap, right in front of Thomas, who narrowly escaped getting collected.

Down the stretch, and on multiple restarts, nobody had an answer for Grant, or for Thomas for that matter, who remained between a half second and a full second behind Grant who strummed his way through a bevy of traffic to score his series-leading fifth feature win of the year by a margin of 0.814 over Thomas.

Thomas’ second place finish was more than good enough to clinch the title by 17 points over Bacon, with Seavey, Thorson and Grant rounding out the top-five. Thomas’ $10,000 prize for winning the Indiana Sprint Week championship was accompanied by the traditional rocker going to the ISW championship team, which is a hand-built creation constructed out of cherry wood, series #036, by John Youngs and is serial #036.

As it panned out, Thomas was the lone driver who finished inside the top-five of the final 2021 ISW point standings not to win a race during the series. Once again, for the fourth consecutive year, the Indiana Sprint Week champion driver went winless throughout their run following Chris Windom (2018), C.J. Leary (2019) and Chase Stockon (2020).

Funny enough, Thomas remains the only ISW champion to also win a feature during the same week since doing so in 2017. It’s a monumental task to put up seven straight nights of successful runs without a major mechanical failure, accident or any other occurrence that can take the whole operation off the rails, especially with the competition level being what it is. Thomas and team were sublime in getting the job done in the KT Motorsports/Dr. Pepper Presents the Ronald McDonald House Charities/DRC/Speedway Chevy.

“You’ve just got to be consistent with these guys,” Thomas explained. “They’re just so balls out every time they get around you. They’re all wanting to win the race. (My crew) stayed consistent and kept their composure. We all know that I don’t do that very well, so I’m glad I have those guys behind my back as well as my wife to talk me back down from certain circumstances on the way home.

“You have bad nights and people that are really fast have bad nights,” Thomas continued. “Brady had an engine issue that set him back for the night. You’ve just got to be at the right place at the right time and we had a good solid week. That was good enough to win and I’m so proud of everybody, our team, our sponsors, it’s just so much fun. I love doing this, and to win another Sprint Week is really special.”

Behind Grant and Thomas at the finish line were Chase Stockon from nearby Fort Branch, Ind. who finished off a rollercoaster ride of a week by equaling his best finish of the season with a third after they switched to a different chassis than the one he had campaigned throughout the first six ISW events, wheeling the KO Motorsports/Hutson John Deere – Superior Tank & Trailer – Ravens/Velocity/Fisher Chevy to the podium.