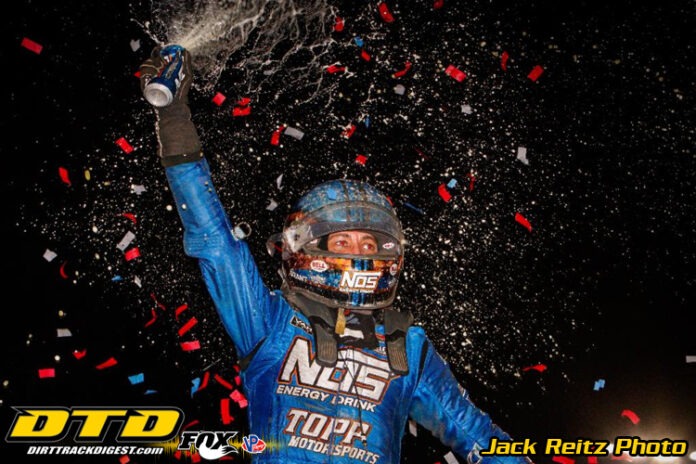 KOKOMO, IN – Justin Grant had kind of won everything in the record book as far as USAC AMSOIL National Sprint Car competition at Kokomo (Ind.) Speedway goes.

In 2018, the Ione, California native won the 40-lap Sprint Car Smackdown finale, just after he had been victorious in the three-lap King of the Hill championship round. Just one month ago, Grant added an 18-lap, rain-shortened feature win to his Kokomo USAC resume.

One thing that was missing – a standard 30-lap USAC feature at Kokomo.

That item was finally crossed off the list during Friday night’s Elliott’s Custom Trailers & Carts Sprint Car Smackdown X opener at the quarter-mile dirt oval in a 30-lap feature that was anything but standard.

After setting Fatheadz Eyewear Fast Qualifying time earlier in the evening, Grant charged his way through the field, engaging in a no holds barred duel which witnessed he and Kyle Cummins repeatedly swapping the lead for three laps straight until Grant took over for good and secured his series-leading sixth victory of the season in his TOPP Motorsports/NOS Energy Drink – MPV Express – TOPP Industries/Maxim/Kistler Chevy.

The triumph was the 27th of Grant’s USAC National Sprint Car career, moving him ahead of Tony Elliott and Dave Steele for sole possession of 21st all-time in the series record book.

As opposed to July’s abbreviated finish that was not all that unwelcome in Grant’s pursuit of victory, in Friday night’s showdown, Grant needed virtually every lap offered, and every ounce of racing acumen he could muster, to get the job done.

“We needed that one to go to the end, for sure,” Grant said with a grin. “Man, tonight was like prime Kokomo. Just pound the fence and try not to make mistakes. I just kept working, trying to figure out how to get off four. Early in the race, I couldn’t get off four very good, so I kept working, kept working, and we finally got to where we could.”

Pole sitter C.J. Leary opened up the festivities by possessing the lead in the early going, but quickly, a challenge was put forth by the driver who had swept both Smackdown prelims one year earlier, Kyle Cummins. Blasting from his fourth starting position, Cummins dug in and surged past Leary off turn four to nip Leary by a wheel at the line at the completion of lap three.
Moments later, ninth-running Brady Bacon was stopped in turn four following a tangle. With the lap completed and scored, Cummins assumed his role as the new race leader. However, at Kokomo, many times it seems the leader is not in total and outright control and, more like, under constant attack.

Following the yellow, Tanner Thorson was rolling, zipping by Leary for second at the exit of turn four on the fifth lap. A little blip above the turn three cushion for Cummins on lap nine allowed the gap between he and Thorson to shrink, and put Thorson, a 2020 Kokomo USAC National Midget winner, in prime position to throttle past Cummins at the exit of turn four on lap 12, pointing his front wheels to the sky as he took ownership of the number one spot.

Entering the second half of the affair meant entering the back half of the field as Thorson and Cummins became engulfed in a high-speed game of warfare. With cars stacked two and three-wide, Thorson had to choose the right door, switching high and low when needed until he and Cummins nearly got caught up in Stevie Sussex’s collision with the turn one wall. All narrowly avoided catastrophe, except for 17th running Sussex, who saw an early dismissal from the race with heavy damage to his machine.

For better or worse, that provided a wide open space for the leaders to maneuver in front of them without the aid, or disruption, of traffic down the stretch. As it turned out, the advantage went to Cummins who glided the cushion crisply on lap 22 between turns one and two, which rocketed him around Thorson and into the lead with just eight laps remaining.

One lap later, big trouble hit Wednesday’s Bob Darland Memorial Kokomo winner Robert Ballou, who snap-rolled with force into the turn one catchfence. Ballou had been running fifth at the time but was eliminated from the competition with a 22nd place result. Ballou was uninjured.

Grant was in hot pursuit of Thorson just prior to the yellow as he followed Cummins’ path on the top side while Thorson worked the bottom around the infield tires. On the 25th lap, Thorson made a bid to get back to the top in turn four but washed up the track just enough to open an alley underneath for Grant to slide through and into the second position.

Thomas Meseraull, running 19th, slowed and stopped on the back straightway on lap 27 to bring out the yellow and reset the itinerary once again for a four-lap shootout. Second-running Grant fired the first shot, sliding past Cummins in turn one. Cummins crossed back under Grant, forcing Grant to reload and try once more in turn three. Cummins retaliated with another cross over in response, beating Grant to the stripe by inches.

Now, it was Cummins’ turn to be the slider and Grant the slidee on lap 28 with Cummins successful in his endeavor. Grant turned back and slid Cummins into the third turn. Cummins cranked the wheel, got the car turned down hill and beat Grant to the line to complete lap 28 a car length ahead. Grant took the bull by the horns and made the next one stick in turn one as he forced Cummins to ‘whoa up’ as he drifted up in front of Cummins’ front bumper, causing him to lose precious momentum.

“On the restart there, Kyle got kind of tight and lost the nose,” Grant recalled. “I slid him into one and I felt like I could wear him down on the cushion and at least break his momentum, and we were able to. Fortunately, nobody rolled by us while we were racing each other. That was a heck of a lot of fun. I sure had a heck of a good time too.”

Grant instantly took off and it was “curtains” from there. Cummins got all four wheels above the cushion in turns three and four on his way to take the white flag, which cost him even more time, and gave an opening for Chris Windom to sneak by on the bottom of turn four for second after starting 10th.

The victory went to Grant with Windom taking second, Cummins third, Leary fourth and Thorson rounding out the top-five.

Chris Windom (Canton, Ill.) collected KSE Racing Products/Irvin King Hard Charger honors after starting 10th and clawing all the way up to a runner-up finish where he made a run at the win during the final laps of the feature aboard his Hayward Motorsports/NOS Energy Drink – Byrd – B & H Contractors – AMSOIL/DRC/Claxton Mopar.

“It feels good coming from 10th there to run second,” Windom acknowledged. “I knew Justin was going to be running the top and I knew he’d be sliding Kyle there. I thought maybe we could sneak one out on the bottom as they were sliding each other back-and-forth. I just lost a little bit of time at the end, but we made it close.”

Kyle Cummins (Princeton, Ind.) led a race-high 16 laps and came up just two laps short of reeling off a third-straight Smackdown prelim feature win dating back to 2020. However, Cummins did continue his impressive streak of consecutive top-three finishes during Smackdown, which now stands at five, after finishing third in his Rock Steady Racing/Mid-America Safety Solutions – Project Oversight/Mach-1/Cummins Chevy.

“On the restart, I got a little bit of a push and just kind of let Justin play the slider game,” Cummins explained. “We kept going back-and-forth, back-and-forth. Going into one and two, right at the end, I was going to stay in it, but I decided to let off and it didn’t let me turn down good enough to get a good run down the back stretch. I wish I could’ve had another shot at him because he could’ve played the ‘let off’ game. But it’s fine. It’s just racing.”

Meanwhile, Grant’s 28th career Fast Qualifying time with the USAC AMSOIL National Sprint Cars moved him past Dave Steele and into a tie with Chase Stockon for 14th in series history.