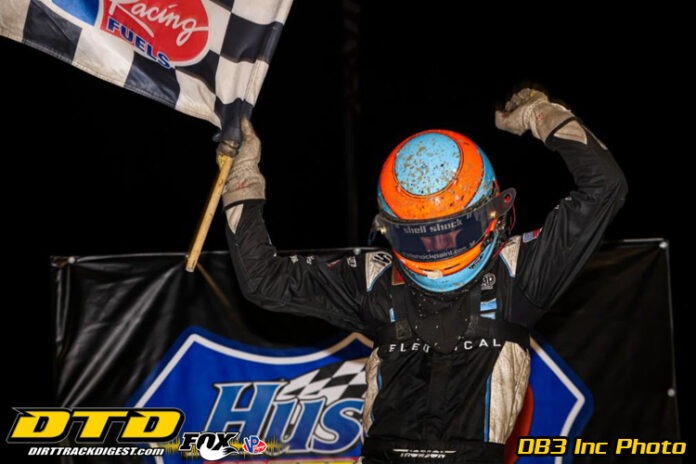 BRANDON, SD – Following a bitterly disappointing end to his run in the midget feature less than 30 minutes before strapping in to go again in the sprint car, Tanner Thorson lived up to the adage, “the best revenge is living well” during Friday’s USAC AMSOIL National Sprint Car feature on the opening night of the inaugural USAC Nationals.

In the immediacy of jumping out of his damaged midget that sat facing the outside turn two wall, Thorson turned his focus to the sprint car and his upcoming leading role on the pole for the evening’s 25-lap nightcap.

A smooth sail for 23 of the 25-lap distance hit choppy waters as Thorson neared scoring what appeared to be a relatively stress-free feature win.

However, that wasn’t the case as race leader Thorson became sideways in turn four, resulting in he and and 16th running Charles Davis Jr. locking horns. With both cars sideways and nearly going on their own respective wild rides, the yellow flag was displayed while Thorson somehow managed to escape the calamity without stopping or spinning.

By the skin of his teeth, Thorson (Minden, Nev.) resumed, then promptly engaged in his own personal green-white-checkered contest with Thomas Meseraull, who prevailed in a much similar situation in the preceding midget feature.

Thorson stayed tried and true on the topside for the remaining two circuits to capture his fourth series victory of the season in his Reinbold-Underwood Motorsports/AME Electrical – CSI – MVT/Spike/Stanton Chevy.

The four feature wins by Thorson have surpassed the most by a USAC National Sprint Car Rookie since Michael Lewis won three in 2003. It was also Thorson’s series-leading 11th overall USAC National feature victory this season, with seven in the midget added to four more in the sprint car.

“It was my bad. I got in there pretty hard trying to clear both (Ryan) Bernal and Charles. That was all my bad,” Thorson revealed. “It paid off in the end for us because we had a fast racecar. Starting there on the bottom, then working on the bottom, I feel like helped us for the first few laps.”

Eventually moving to the top shortly thereafter, that’s where Thorson performed most of his work, building a cushion of 1.5 seconds over his front row counterpart, Meseraull, who started second and followed Thorson in sync around the perimeter of the racetrack.

Meseraull managed to whittle a full second off Thorson’s lead in traffic, but once Thorson hit clear air once again, the interval grew back to 1.5 seconds until the flashing yellow lights for the Thorson/Davis slight tangle restacked the deck with two laps remaining.

Without traffic, Thorson stepped away to put a stamp on a winning performance while multiple battles raged back behind he and second-running Meseraull.

Tenth-starting Brady Bacon dipped underneath Robert Ballou for the third spot in turn three coming to the white flag while, simultaneously, Ballou and Jake Swanson touched wheels, getting Ballou’s car into a peculiar sideways position momentarily before he gathered it up and motored back past Kevin Thomas Jr. who had briefly nosed ahead off turn four for fourth.

Up front, it was all Thorson who put the race on ice with a 0.715 second margin of victory over Meseraull, Bacon and Ballou with Thomas Jr. rounding out the top-five.

For Meseraull, it was a sterling night with a midget win followed by a second-place result in his Yeley Racing/Avanti Windows & Doors – Apache Scapes – CK Electric/Twister/Claxton Mopar sprint car. The runner-up finish marks the San Jose, California driver’s best with the series since winning the Sprint Car Smackdown opener at Kokomo (Ind.) Speedway in 2019. Furthermore, the second-place finish is the best by a Jack Yeley-owned car with the series since Kevin Swindell finished second at Southern Iowa Speedway in Oskaloosa, during the 2008 season.

“I’m pretty excited about putting the ol’ 2 up here on the podium,” Meseraull said. “How about that? Hats off to Jack Yeley. We just really haven’t been all that great in this thing. He put the super tune to it because here we are on the podium.”

In regard to the big payouts throughout the week with $5,000-to-win on the Friday and Saturday night programs, plus a $20,000 winner’s share for Sunday night’s finales, Meseraull was cautious about his mindset toward it.

“For me, it’s so important to not pay attention to the money because I will drive this thing right into the fence if it paid enough money,” Meseraull said point blankly. “That’s what happens when you put the money on the line. I really don’t care about the money. I’m going to try to go forward, rip the lip, bang sliders, you know, do what I love to do best.”

Brady Bacon (Broken Arrow, Okla.) put his Dynamics, Inc./Fatheadz Eyewear – Elliott’s Custom Trailers & Carts – TelStar/Triple X/Rider Chevy back into the top-five for the 17th time in his last 20 starts to extend his series point lead to an even 50 as he pursues a fourth career USAC National Sprint Car driving title. His advancement from the 10th starting spot to finish third also earned him KSE Racing Products Hard Charger honors for the evening.

“We were running fourth, and we got a really good run off the bottom and kind of poked him out of the way there,” Bacon explained of his late-race pass of Ballou to round out the podium. “We were going to get freight-trained if we were going to be following. Twenty-five laps just isn’t enough to come from 10th when you have to pass good cars, but I think we had a car capable of winning for sure.”

In qualifying, Logan Seavey set a new one-lap track record for USAC National Sprint Cars at Huset’s Speedway with a time of 12.576 seconds, taking over the best all-time speed at the track from Kevin Thomas Jr. who held the former mark of 12.711, set in 2016.