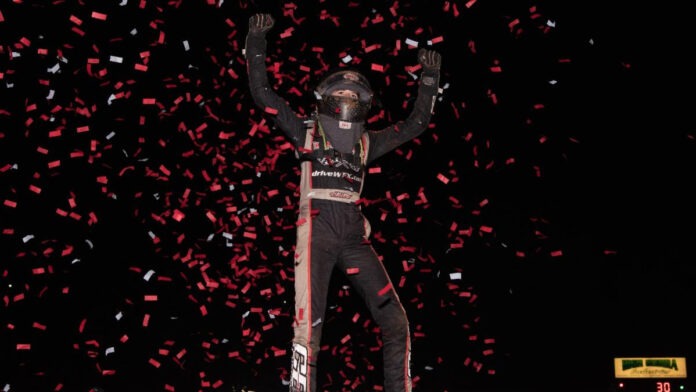 PLACERVILLE, CA – At just 15 years, 3 months and 12 days old, Ryan Timms made history Thursday on night one of the Elk Grove Ford Hangtown 100 at California’s Placerville Speedway by becoming the youngest feature winner in the history of the USAC NOS Energy Drink Midget National Championship.

Although the victorious occasion marked Timms’ first career series win, his performance also produced a déjà vu moment that harkened back to the opening night of the most recent Hangtown 100 in 2019.

It was then and there two years ago that a Chad Boat-owned car started on the outside of the front row, took the lead at the drop of the green flag, and led all 30 laps en route to a first career USAC National Midget feature victory, that driver being Gio Scelzi.

One day shy of exactly two years later, a Chad Boat-owned car started on the outside of the front row, took the lead at the drop of the green flag, and led all 30 laps en route to a first career USAC National Midget feature victory, this time that driver being Ryan Timms.


In just his 12th career USAC National Midget feature start, Timms earned not only his first career win, but also his first career top-five finish after a previous best result of 6th in August’s BC39 at The Dirt Track at Indianapolis Motor Speedway.

Full of potential, talent and poise, Timms’ has earned 16 total sprint car and midget victories this season, including his first with USAC that arrived sooner than he would’ve even thought.

“It’s just really unexpected,” Timms admitted. “I got a really good start and I figured if I could just keep my momentum up on the top, they wouldn’t have anything for me.”

Timms ran roughshod through the field, never wavering from the high line in a non-stop feature that went green to checkered in a mere six minutes and 7.97 seconds in his CB Industries/Western Flyer Express – DriveWFX.com – PristineAuction.com/Spike/Speedway Toyota.

By lap seven, Timms had constructed a full-straightaway lead and was already on the cusp of sailing through the tail end of the field. Shortly thereafter, fifth starting Cannon McIntosh slid his way into the third position in turn three past Justin Grant, then a half a lap later, made the same maneuver on the opposite end of the racetrack to streak by Zeb Wise for second.

With the combination of Timms’ fight through traffic and McIntosh now being in the clear and possessing a full head of steam, the naked eye could undoubtedly tell that Timms’ advantage was sheared in half from a full-straightaway to just a half.

Timms made his escape through the jungle of machinery, clearing Colby Copeland in turn four on lap 24 to put him a lap down, then promptly stretching his lead to a full straightaway without a bit of traffic in his view and only six laps remaining. McIntosh quickly disposed of Copeland as well and quickly carved into Timms’ lead in half once again, from a half-straightaway to a quarter-straightaway and closing.

With McIntosh now standing just a single car length back of Timms’ coming to the white flag, the sands were filling the bottom of the hourglass. Timms stayed tried and true to the high line while McIntosh, who shadowed him up on the cushion, was forced to hatch a plan for an alternate path in order to get by.

In the final set of corners in turns three and four, Timms worked to the outside of 19th running Chase Randall, who occupied the bottom. McIntosh dove toward the infield berm but ran out of room in which to toss a possible slide job with Randall occupying the groove. Meanwhile, up top, Timms maintained the momentum and, subsequently, delivered victory number one.

Two nights after starting off his California Midget swing with a 15th place result at Bakersfield, Timms felt the swing of momentum, and the swing of emotion, take a path in his direction on this night, as one Oklahoman beat another Oklahoman for the $5,000 top prize.

“There was a bunch of lapped traffic and I figured he’d be right there, but I never saw his nose,” Timms recalled of his battle to the finish with McIntosh. “It’s been a pretty humbling trip. We’ll have a great run then run dang near last the next night. So, to get this one is just awesome.”

Of late, Cannon McIntosh (Bixby, Okla.) has been among the quickest and most consistent in the series in his Dave Mac Motorsports/DriveWFX.com – D.A. McIntosh – Smith Titanium/Spike/Speedway Toyota. Although his streak of three consecutive Fatheadz Fast Qualifying times came to an end Thursday, he did record his second runner-up finish in his last three outings as he gets ever closer to his first series win of the season, but just ran out of time.

“I was really driving it hard,” McIntosh said. “I honestly thought we had more laps left, then I saw the white and we just ran out of time there. It would’ve been nice to get a yellow and see what we could’ve done with the field bunched up without traffic but, sometimes, that’s how it goes. I felt like we had a shot to win tonight. We have two more nights and I’m really excited because I feel like we have a really good racecar.”

For the second consecutive race, Justin Grant (Ione, Calif.) rounded out the podium with a third-place finish in his RMS Racing/NOS Energy Drink – EnviroFab – Response Management Services/Spike/Speedway Toyota. Located about 30 miles or so from his hometown of Ione, Calif., for Grant, Placerville served as a homecoming of sorts, conjuring up memories of his early days of competition with the Bay Cities Racing Association, where he was the 2007 series champ.

“We want to get to victory lane every night, but if we can’t win, coming out with a good solid run is a bonus, especially on a three-day event like this,” Grant said. “We want to win Saturday and we’re doing everything we can to put ourselves in a good position to do that. We’re going to have to be a little better to beat those guys, though. They were ripping around there pretty good.”

Four new track records were set on Thursday night at Placerville with Tanner Thorson recording the 23rd Fatheadz Fast Qualifying time of his career in USAC National Midget competition, moving him past Stan Fox for sole possession of 17th on the all-time list. Thorson’s time of 11.397 broke the former one-lap track record of 11.979 seconds, set by Dillon Welch in 2019.

Thomas Meseraull’s time of 1:57.13 in Simpson Race Products broke his own track record by more than 11 seconds during Simpson Racing heat one, completely demolishing his former mark of 2:08.68, set in 2019.

Thorson posted a second new track record of the evening for himself in the second of two Elliott’s Custom Trailers & Carts Semi-Features. His time of 2:25.95 set the new standard for the 12-lap distance at the 1/4-mile dirt oval.