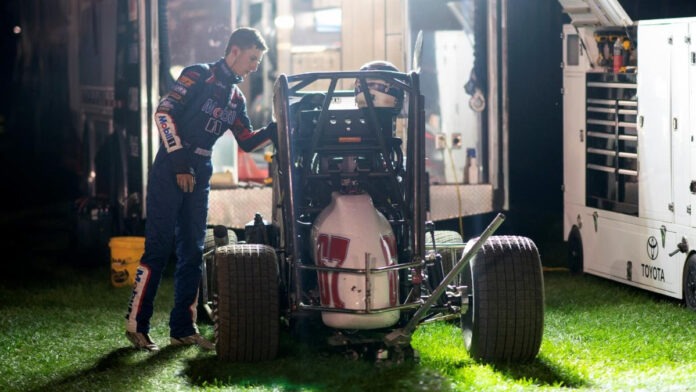 SPEEDWAY, IN – When posed the question prior to the start of his 2021 season of whether anything less than a USAC NOS Energy Drink Midget National Championship would be a disappointment, Buddy Kofoid showed no hesitation in unequivocally acknowledging that fact.

After capturing Rookie of the Year honors in 2020, the Penngrove, Calif. driver elevated his game even more the following year, scoring the series title in his second full season of competition on the strength of six victories in a campaign that saw its share of triumphs and tribulations, including an injury that very easily could’ve derailed what became the 19-year-old driver’s destiny.

The pressure, whether it’s produced by Kofoid himself or thrust upon him, is what he thrives upon. An outlook of “championship and nothing less” gave the uber-talented Kofoid the chip on his shoulder that provided an unwavering edge needed to succeed at the national level.

“I bring that pressure on myself; I guess that’s kind of how I work,” Kofoid acknowledged. “To me, my job was to win the championship and that’s what I was brought on to do. I knew that, and I knew I wouldn’t accept anything less anyway. For me, personally, winning races and winning championships is what keeps you going. I like the pressure and, to me, if you don’t get nervous, that’s not a good thing. You get nervous because you care, and you want to do good, and you put that kind of pressure on yourself when you want to achieve something.”

Returning to the fold with the same crew chief as the previous year – Jarrett Kramer – the same venerable Keith Kunz/Curb-Agajanian Motorsports team and high expectations from himself, his peers and the public, Kofoid came flying right out the box with victories in two of the first three events, including February’s daytime opener at Bubba Raceway Park in Ocala, Fla. followed by the biggest charge by any driver during the season, a 16th to 1st performance to win at Tulsa, Oklahoma’s Port City Raceway in April.


Adding victories at Bloomington Speedway and Gas City I-69 Speedway in June propelled Kofoid to the Indiana Midget Week title. A solid July saw three more top-ten finishes in four additional starts, which provided Kofoid a sturdy 37-point lead over defending series champion Chris Windom entering the second half of the season. But that’s where things took an unexpected excursion.

A late model crash at Minnesota’s Elko Speedway on July 24 resulted in a broken right wrist and a broken left foot for Kofoid. With an arm cast grooved to fit the curvature of his steering wheel, ala Jim Hurtubise, Kofoid finished 10th his first time out in the body armor at Pennsylvania’s Grandview Speedway. Coupled with Windom’s victory that same night, Kofoid’s point lead was in jeopardy after being sliced down to 13.

Kofoid was forced to acclimate to his new clime inside the racecar, firstly merely discovering a new comfort level in the car. Since he couldn’t close his right hand all the way, the team beefed up the steering wheel with extra padding on one side to make it fatter and easier to grip. Furthermore, the body on the right side of the car was spaced out a bit more in order for him to lift his arm up higher since he had no wrist movement.

“It was frustrating; It was a nuisance; and it hurt,” Kofoid explained. “I made sure that I could race because I wanted that championship, and I accepted the challenges that it was going to bring. I made sure to get a custom, form-fitted cast and tried to take all the right steps to make myself as comfortable as I could. When your wrist movement is taken away, it forces you to chicken wing. With little stuff like that, we did as much as we could to help. It was definitely tough, and I feel like I float my right hand a lot. But when you take it away completely, you realize how much you actually use it.”

While Kofoid didn’t win with the cast, coming as close as second on two occasions at Pennsylvania’s Lanco’s Clyde Martin Memorial Speedway and at South Dakota’s Huset’s Speedway, he continued to perform at a high level with 12 top-tens in 12 starts with the cast, including eight top-five results.

The spectacular run of consistency gave Kofoid the confidence that if he could run halfway decent with the cast, once he returned to normal, he felt like he would perform even better. Akin to running with ankle weights or swinging a fungo bat before going to the real deal, theoretically, everything would seemingly become easier once the medical shackles were released.

Despite that, Kofoid did lose his grip on the point lead following the 4-Crown Nationals at Ohio’s Eldora Speedway, falling behind Windom. However, that marked the final race Kofoid had to endure with the cast.

From that point forward, the season took on a new look for Kofoid beginning with the ensuing event in October at Indiana’s Tri-State Speedway, which returned his full confidence despite a less-than-stellar finish that resulted in a dip further back in the point standings behind Windom. While battling for the race lead that night, Kofoid was involved in a kerfuffle that caused him to flip but managed to save face by returning to finish ninth in the final rundown.

At that juncture, Kofoid and team discovered something else that had been shackling their performance.

“We found out in October, after the cast came off, that the car that we had run during the summer months was built with a different kind of chromoly and it ended up not working really well for us,” Kofoid detailed. “We really struggled with it, and once we got rid of that car and back to what all the other cars were like, and what my older car was like, that fixed some of those problems we were having. That started to help get our speed back and getting the cast off helped even more.”

With knowledge of the car issue and now free of pain as he headed out west for the final nine events of the season, Kofoid felt a flip of the switch was coming soon in the Golden State.

“There’s something about home state racing; it does something to you; I don’t know what it is,” Kofoid comprehended. “The start of the western swing was really where it started to click again like it had been the rest of the year.”

Kofoid shot back ahead of Windom and into the point lead with his first victory in five months at Bakersfield Speedway on Nov. 16. However, a rough go in the Hangtown 100 opener at Placerville Speedway demoted Kofoid back to second in the standings, down 13 to Windom. The tables were turned the following night at Placerville as Kofoid took fifth and Windom uncharacteristically spun out on his own while leading the feature.

Kofoid never relinquished the point lead from that point forward, finishing on the podium in each of the final three races, starting with a second on the first night at Merced Speedway. His first career fast qualifying time with the series followed the next night, which was punctuated by a feature victory.

At the finale in Ventura, Calif., Kofoid wrapped up the championship by gaining four points in qualifying after timing in third quick. With house money, he took second place in the Turkey Night Grand Prix feature and celebrated an 89-point advantage in the final standings.

Kofoid became the sixth driver, and the first in seven seasons, to score the Indiana Midget Week title and the USAC National Midget championship in the same season. He joins Jerry Coons Jr. (2007), Bryan Clauson (2011), Darren Hagen (2012), Christopher Bell (2013) and Rico Abreu (2014) in that category.

There were five first-time USAC National Midget winners in 2021, tied for the most over the last 13 seasons. Among them were Emerson Axsom, Daison Pursley, Kyle Cummins, Corey Day and Ryan Timms who, at just 15 years, 3 months and 12 days old, became the youngest feature winner in the history of the series with a victory at California’s Placerville Speedway in November.

Chris Windom and Justin Grant each scored the most lucrative victories of the 2021 USAC National Midget season. Windom collected $20,000 at South Dakota’s Huset’s Speedway in September while Grant notched $20 Grand for himself with a victory in November at Placerville. Both races were 100-lappers, the two longest races on the schedule.

Kyle Larson became the first driver ever to win a USAC National Midget feature on dirt and the NASCAR Cup Series championship in the same season. The Elk Grove, Calif. driver won twice in 2021 with USAC, first at the BC39 at The Dirt Track at Indianapolis Motor Speedway in August then again at his home track of Placerville in November.

Logan Seavey, meanwhile, became the first driver to win the season finales on dirt for all three of USAC’s National divisions. In September, he etched his name as the winner of the final USAC Silver Crown race of the year on dirt at Eldora. In mid-November, he shut down the Arizona Speedway dirt oval for the final time with a triumph in the USAC AMSOIL Sprint Car National Championship season finale, then finished off with a midget win in the Turkey Night Grand Prix at Ventura in late-November. He also captured a score in June during Indiana Midget Week at Lawrenceburg.

Returning to victory lane during the 2021 season were Thomas Meseraull who scored four wins in four different months throughout the year as well as Tyler Courtney who moved into the top-five all-time in terms of USAC National feature victories at Eldora Speedway with his win in the race held the night before the 4-Crown Nationals.