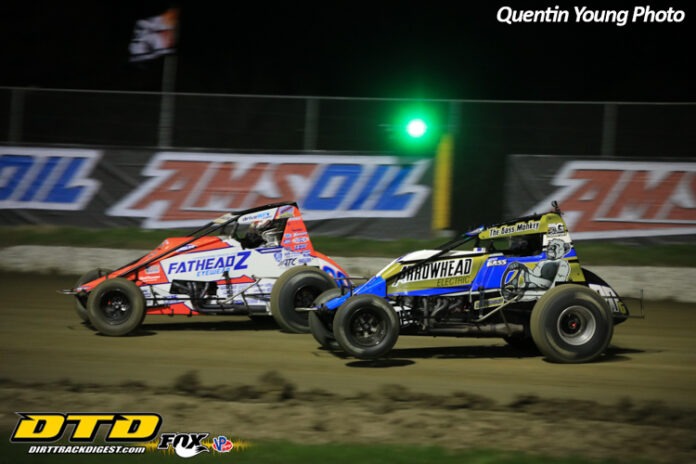 OCALA, FL – Six past Bubba Raceway Park Winter Dirt Games feature winners are ready to fire off for the start of the 2022 USAC AMSOIL National Sprint Car season when the cavalcade of cars, drivers, teams and fans converge on the 3/8-mile D-shaped dirt track on February 17-18-19 in Ocala, Fla.

A dedicated practice night for Sprint Cars is scheduled for Wednesday night, February 16, from 7-10 pm ET.

Justin Grant (Ione, Calif.) seeks more Winter Dirt Games fortune in 2022 after capturing the victory on the final night of the event in 2021 at Ocala after previous triumphs there in both 2017 and 2019. The 2020 USAC Silver Crown king rolls in with four consecutive WDG Sprint Car top-five finishes, tops among all drivers. He also returns this season to TOPP Motorsports for the fifth consecutive season, which is the longest continuous full-time driver/entrant tandem with the series entering 2022.

Four-time and defending series champion Brady Bacon (Broken Arrow, Okla.) heads the field in terms of previous USAC National Sprint Car feature victories at Ocala with four. He swept both nights of Winter Dirt Games in 2020 after previous triumphs in 2014 and 2015, all in the seat of the famed Dynamics, Inc. No. 69.

Robert Ballou (Rocklin, Calif.) is one of four drivers in this year’s field to have competed in the very first Winter Dirt Games feature at Ocala in 2011, along with Grant, Shane Cottle and Brady Short. Ballou has nabbed a pair of wins at Ocala, first in his USAC championship season of 2015 and again in 2016, while also notching an additional one at East Bay in 2015. Ballou also holds multiple track records at Ocala, setting the 8-lap mark in 2019 at 1:50.92 and the 12-lap standard of 2:52.77 in 2013.

C.J. Leary (Greenfield, Ind.) is one of seven USAC National champions in this year’s Ocala USAC Sprint field along with Grant, Bacon, Ballou, Tanner Thorson, Buddy Kofoid and Logan Seavey. Leary, the 2019 titlist, led the way to victory in the 2019 WDG closer and enters with nine-straight WDG top-ten finishes dating back to 2018.

Thomas Meseraull (San Jose, Calif.) has knocked out both a USAC National Sprint Car and USAC National Midget feature win at Ocala in his career, notching the midget victory in 2021 and the sprint win on the final lap of the final night in 2016. With the sprint car, he hasn’t appeared at WDG since 2017. He’s also recorded a 3rd in both 2016 and 2017 and has finished inside the top-five in all five of his Ocala sprint car starts.

LOOKING TO BREAK THE ICE AT WDG:

Tanner Thorson (Minden, Nev.), the 2021 USAC National Sprint Car Rookie of the Year, has already tasted victory at Ocala with USAC, but it came in the Midgets, in the WDG opener in 2020. Thorson’s two sprint car starts at Ocala have brought about a 4th and a 6th, both in 2021. The 2016 USAC National Midget champion also owns the track record in a Midget at Ocala and his Reinbold-Underwood Motorsports team has been victorious there with the sprint car, with Leary, in 2019.

Buddy Kofoid (Penngrove, Calif.) will make his second Winter Dirt Games USAC Sprint appearance for the relaunch of the Keith Kunz/Curb-Agajanian Motorsports team. The 2021 USAC National Midget champion won the midget opener season opener that year at Ocala, and a week later, in the sprint car, he finished 8th and a career best 3rd.

Thus far, Logan Seavey (Sutter, Calif.) has only raced sprint cars at Ocala in the even-numbered years in his career. He debuted in 2018, then left Ocala in 2020 with his best USAC Sprint Car performance at the track, finishing 3rd. In 2022, he’s back to start his first bid for a USAC National Sprint Car championship, driving for Baldwin-Fox Racing, a combo in which both sides are looking for win number one at Ocala.

Jake Swanson (Anaheim, Calif.) led a race-high 21 laps on the second night of the 2021 WDG at Ocala before, ultimately, finishing 7th in his first weekend of action at the track. He’d later go on to win the 2021 USAC National Most Improved Driver award for his stout season.

Carson Short (Marion, Ill.) owns the one-lap track record for USAC National Sprint Cars at Ocala with a time of 13.398 seconds, set in 2019. The one-time series winner will make his return to WDG for the first time since 2020 and owns nine top-ten finishes at the track but is looking to slide into the top-five for the first time this year.

Matt Westfall (Pleasant Hill, Ohio) has been a steady presence at Winter Dirt Games throughout the past decade. The versatile past NAMARS Midget champion and Eldora late model titlist took 14th at Ocala with the USAC Sprint Cars back in 2020 for his best performance so far.

Three years since his last WDG appearance, Jason McDougal (Broken Arrow, Okla.) is back in action, finishing 7th in his most recent start with the series at Ocala in 2019. Shane Cockrum and Zach Daum both made their most recent Winter Dirt Games stop in 2015. Cockrum (Benton, Ill.) finished in the 8th position on night one while Daum (Pocahontas, Ill.) positioned 7th one night later.

Jadon Rogers (Worthington, Ind.) the 2020 USAC National Sprint Car Rookie of the Year, has graduated from high school and is hitting the full USAC series tour for the first time in his young career. He came in 13th during his Ocala debut in 2021, but he’s been gaining speed and experience over the past couple of years and is primed for a breakthrough in 2022.

Briggs Danner (Allentown, Pa.) made his USAC National Sprint Car debut at Ocala in 2021, finishing 21st, but throughout the year, quickly made his name known with sterling performances in National series competition while finishing up a nine-win Rookie of the Year season with the USAC Rapid Tire East Coast Sprint Cars.

Cole Bodine (Rossville, Ind.) also made his Ocala debut in 2021, finishing 22nd. The USAC National Midget veteran is fairly new to the sprint car wars but will be one to watch as he goes full-time with the USAC trail in the coming year.

An early season accident and subsequent injury derailed Carson Garrett (Littleton, Colo.) and his progress as a first-year sprint car driver in 2021. Prior to the injury, he finished 23rd in his first and lone Ocala appearance. Returning later in the year, Garrett picked up speed and became a solid frontrunner with the Midwest Sprint Car Series where he was named Rookie of the Year.

Reigning USAC Wholesale Batteries Midwest Wingless Racing Association champion Kory Schudy (Battlefield, Mo.) has routinely been a solid citizen during Winter Dirt Games over the past few seasons, bested with a 14th place performance in his most recent start in 2021.

Dennis Gile (Phoenix, Ariz.), a former Canadian Football League quarterback for the Saskatchewan Roughriders and a member of the New England Patriots training camp roster, will return to Winter Dirt Games this year for the first time since 2020 where he turned a pair of solid performances, led by a 10th on night two.

Drivers looking for their first career Winter Dirt Games sprint car starts include a heavily talented bunch with heavy right feet. Emerson Axsom (Franklin, Ind.) finished 5th and 7th in two midget starts there a year ago and will pilot a Clauson Marshall Newman sprinter, which won two-in-a-row with Tyler Courtney in 2018.

THE HISTORY, THE MYSTIQUE:

USAC racing and the “Sunshine State” have a history that dates back to the club’s origins in 1956. In fact, the first three USAC Sprint Car races ever held took place in Florida in February of 1956. Bob Sweikert won the first such event at Southland Speedway in West Palm Beach, followed by Chuck Weyant at Jacksonville Speedway and Pat O’Connor at Medley Speedway in Miami.

Over the first two nights of USAC Sprint Car events at Ocala, total points will be calculated, which will “lock-in” the top-five in total combined points into Saturday night’s feature event and formulate the lineups for Saturday’s finale. The program on Saturday night will have no qualifying, and will instead consist of three qualifying races, each 10 laps in length, lined up “straight-up” based on points from the first two nights. If either Thursday or Friday’s events are rained out, Saturday will then revert to the traditional format.

The second half of WDG brings on the beginning of the USAC AMSOIL National Sprint Car season Feb. 17-18-19 at Bubba Raceway Park. A practice night on Feb. 16 will precede the three nights of racing from 7-10pm ET. Grandstand admission is free for practice. Pit passes are $20 apiece.

Each and every night of Winter Dirt Games XIII can be watched LIVE on FloRacing at https://bit.ly/3frPoW6.

2B CHAD BOESPFLUG/Hanford, CA (2B Racing)

57B COLE BODINE/Rossville, IN (DCT Racing)